Putting the ‘bang’ in Big Bang

Physicists have pondered how the cold, uniform matter of the inflationary early universe became the ultrahot, complex mixture of matter, space and time that led to the universe we know. New work simulates a bridge between cosmic inflation and … everything else. 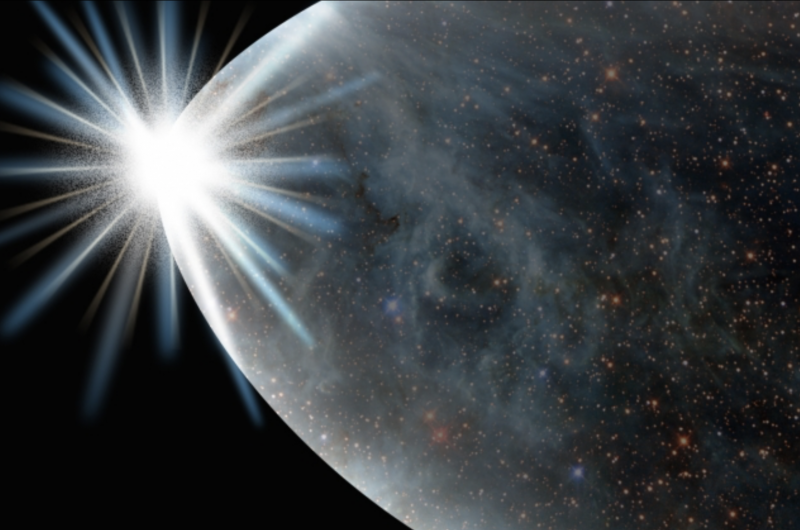 According to Big Bang theory, our universe began as a singularity – a point of seemingly infinite density containing all the mass and spacetime of the universe – then inflated over the next 13.8 billion years to the cosmos that we know today. Image via Christine Daniloff/MIT/ESA/Hubble/NASA.

Because light travels at a finite speed, looking out into space lets us look back in time. But – as yet – astronomers have not been able to peer back far enough to witness the birth of the universe. For that reason, what we understand about the universe’s birth comes from theoretical physicists and astrophysicists, who rely on mathematical formulas and computer models. Late last week (October 24, 2019), physicists at MIT announced that they’ve worked with others around the globe to simulate a critical “reheating” period that kickstarted the Big Bang in the universe’s first fractions of a second. This new work helps explain what has been a mystery in cosmology: how cold, uniform matter in the brief period of inflation – a period lasting less than a trillionth of a second in the early universe – transformed to become the ultrahot, complex soup that led to the universe as we know it.

In an fascinating piece for the MIT News Office, Jennifer Chu explained:

As the Big Bang theory goes, somewhere around 13.8 billion years ago the universe exploded into being, as an infinitely small, compact fireball of matter that cooled as it expanded, triggering reactions that cooked up the first stars and galaxies, and all the forms of matter that we see (and are) today.

Just before the Big Bang launched the universe onto its ever-expanding course, physicists believe, there was another, more explosive phase of the early universe at play: cosmic inflation, which lasted less than a trillionth of a second. During this period, matter — a cold, homogeneous goop — inflated exponentially quickly before processes of the Big Bang took over to more slowly expand and diversify the infant universe.

Recent observations have independently supported theories for both the Big Bang and cosmic inflation. But the two processes are so radically different from each other that scientists have struggled to conceive of how one followed the other.

Now physicists at MIT, Kenyon College, and elsewhere have simulated in detail an intermediary phase of the early universe that may have bridged cosmic inflation with the Big Bang. This phase, known as ‘reheating,’ occurred at the end of cosmic inflation and involved processes that wrestled inflation’s cold, uniform matter into the ultrahot, complex soup that was in place at the start of the Big Bang.

Physicist and science historian David Kaiser of MIT is a co-author on the new paper, which was published October 25, 2019, in the peer-reviewed journal Physical Review Letters. He commented in Chu’s article:

The postinflation reheating period sets up the conditions for the Big Bang, and in some sense puts the ‘bang’ in the Big Bang.

It’s this bridge period where all hell breaks loose and matter behaves in anything but a simple way. 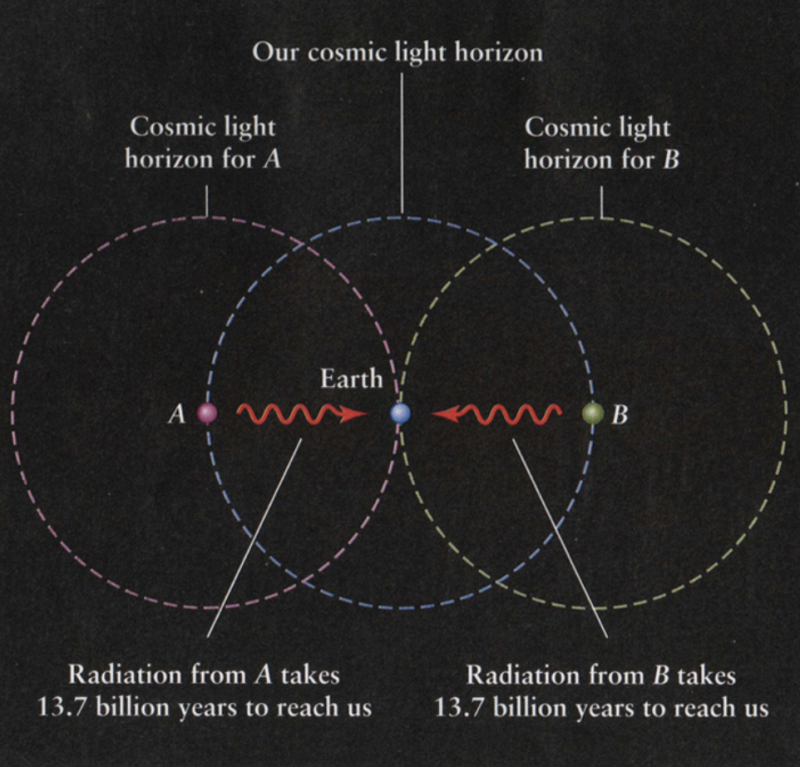 Alan Guth first proposed and developed cosmic inflation as a theory in 1979. The theory was needed to resolve outstanding mysteries in cosmology. For example, there was the horizon problem. As shown in this image, these photons could not have communicated with each other unless inflation took place in the very early universe. Read more about the inflationary universe and how it solves the horizon problem at the Stephen Hawking Centre for Theoretical Cosmology.

According to Chu, Kaiser and his colleagues used the tools of physics, mathematics and computers to simulate in detail how multiple forms of matter would have interacted at the end of the very brief period of inflation:

Their simulations show that the extreme energy that drove inflation could have been redistributed just as quickly, within an even smaller fraction of a second, and in a way that produced conditions that would have been required for the start of the Big Bang.

The team found this extreme transformation would have been even faster and more efficient if quantum effects modified the way that matter responded to gravity at very high energies. Quantum mechanics is the branch of physics that deals with the very small, that is, with the motion and interaction of subatomic particles, which are the basic consituents of all matter. Einstein’s theory of general relativity, meanwhile, predicts matter and gravity should interact; modern Big Bang Theory is highly dependent on it. It was this blending of Einstein’s theory with quantum mechanics that led to the new work’s conclusion: that a critical “reheating” period at the end of the period of inflation helped transform cold, uniform matter into an ultrahot, complex medium that led to star-filled galaxies, and everything else, we know today.

This enables us to tell an unbroken story, from inflation to the postinflation period, to the Big Bang and beyond. We can trace a continuous set of processes, all with known physics, to say this is one plausible way in which the universe came to look the way we see it today.

Read more about this study from MIT News

Bottom line: Physicists have pondered how the cold, uniform matter of the inflationary early universe became the ultrahot, complex mixture of matter, space and time that led to the universe we know. New work simulates a bridge between cosmic inflation and … everything else.