Best view yet of colliding galaxies in distant universe

Using telescopes on the ground and in space, astronomers have obtained the best-yet view of a galaxy collision that happened when the universe was half its current age. 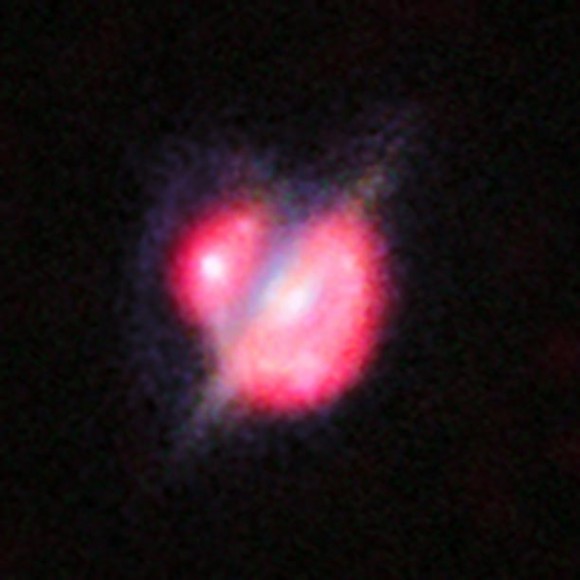 A collision that took place between two galaxies when the universe was only half its current age. This picture combines the views from the Hubble Space Telescope and the Keck-II telescope on Hawaii (using adaptive optics) along with the ALMA images shown in red. Image credit: ESO, ALMA (NRAO/ESO/NAOJ); W.M. Keck Observatory; NASA/ESA

An international team of astronomers used several telescopes – on the ground as well as in space – to get the best view yet of a collision between two galaxies that took place when the universe was only half its current age.

To make this observation, the team also enlisted the help of a gravitational lens, a galaxy-size magnifying glass to reveal otherwise invisible detail of galaxy HATLAS J142935.3-002836.

Cosmic lenses are created by massive structures like galaxies and galaxy clusters, which bend light from objects behind them due to their strong gravity – an effect called gravitational lensing. The magnifying properties of this effect allow astronomers to study objects that would otherwise be invisible and to directly compare local galaxies with much more remote ones, when the universe was significantly younger.

For these gravitational lenses to work, however, the foreground lensing galaxy and the one beyond need to be precisely aligned and these chance alignments are quite rare and tend to be hard to identify.

HATLAS J142935.3-002836 (or H1429-0028 for short) is one of these sources. It is among the brightest gravitationally lensed objects in the far-infrared regime found so far, even though we are seeing it at a time when the universe was just half its current age.

To study this object in further detail, the astronomers started an extensive follow-up campaign using an impressive collection of incredibly powerful telescopes, including the Hubble Space Telescope, ALMA, the Keck Observatory, and the VLA, among others.

The Hubble and Keck images revealed a detailed gravitationally induced ring of light around the foreground galaxy. These high resolution images also showed that the lensing galaxy is an edge-on disc galaxy – similar to our Milky Way -which obscures parts of the background light due to the large dust clouds it contains.

But this obscuration is not a problem for ALMA and the VLA, since these two facilities observe the sky at longer wavelengths, which are unaffected by dust. Using the combined data, the team discovered that the background system was actually an ongoing collision between two galaxies.

This research was presented in a paper online in the August 26 journal Astronomy & Astrophysics.