This beautiful stellar jewel-box – a tightly packed cluster of stars – is one of the few places in our galaxy where astronomers think stars can actually collide. 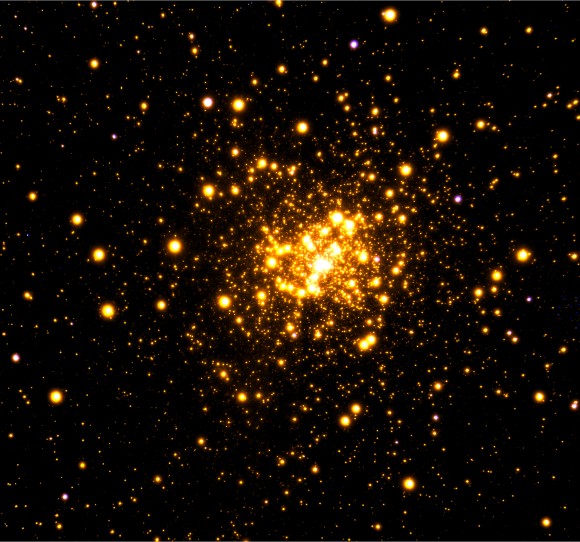 Scientists using the Gemini South telescope in Chile have imaged a cluster of stars, known as Liller 1, where stars are so densely packed that it is likely a rare environment where stars can collide.

An international research team published the results in The Astrophysical Journal on June 15, 2015. Francesco R. Ferraro of the University of Bologna (Italy) is one of the team members who used the Gemini Observatory to make the observations. Ferraro said:

It’s a bit like a stellar billiards table, where the probability of collisions depends on the size of the table and on the number of billiard balls on it.

Liller 1 is a difficult target to study due to its distance and also because it is located close to the center of the Milky Way (about 3,200 light-years away from it), where the obscuration by dust is very high. The unprecedented ultra-sharp view of the cluster reveals a vast city of stars estimated by the team to contain a total mass of at least 1.5 million suns, very similar to the most massive globular clusters in our galaxy: Omega Centauri and Terzan 5.

Although our galaxy has upwards of 200 billion stars, there is so much vacancy between stars that there are very few places where suns actually collide. The congested overcrowded central regions of globular clusters are one of these places. Our observations confirmed that, among globular clusters, Liller 1 is one of the best environments in our galaxy for stellar collisions.

Sara Saracino, from the University of Bologna, is the paper’s lead author. She said:

This isn’t one of these showpieces, it is so obscured by material in the central bulge of our galaxy that is almost completely invisible in visual light.

Indeed, Liller 1 is located at almost 30,000 light years from Earth, in one of the most inaccessible regions of our galaxy, where thick clouds of dust prevent the optical light from emerging.

Only infrared radiation can travel across these clouds and bring us direct information on its stars. 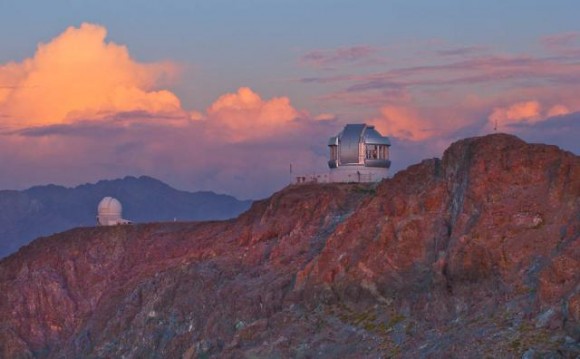 The observations of the tightly packed cluster used Gemini Observatory’s powerful adaptive optics system at the Gemini South telescope in Chile. A technical jewel named GeMS (derived from “Gemini Multi-conjugate adaptive optics System”), in combination with the powerful infrared camera Gemini South Adaptive Optics Imager (GSAOI), was able to penetrate the dense fog surrounding Liller 1 and to provide astronomers with this unprecedented view of its stars.

Bottom line: Scientists using the Gemini South telescope in Chile have imaged a cluster of stars, known as Liller 1, where stars are so densely packed that it is likely a rare environment where stars can collide.