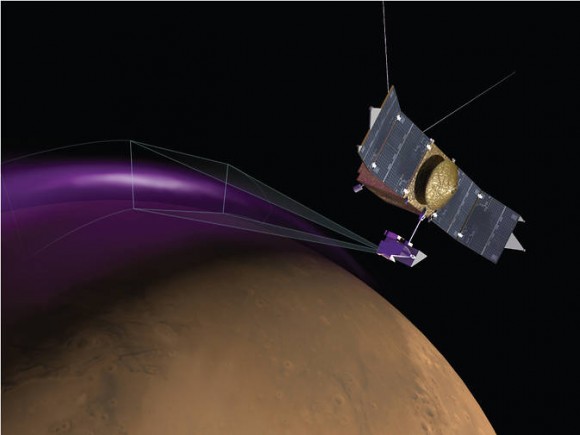 Artist’s concept of what scientists are calling the Christmas Lights Aurora on Mars, as seen by the MAVEN spacecraft. MAVEN observations show that the aurora on Mars is similar to Earth’s aurora, but has a different origin. Image via University of Colorado

NASA’s Mars Atmosphere and Volatile Evolution (MAVEN) spacecraft – which arrived at Mars in September, 2014 – has observed two interesting and surprising phenomena in the Martian atmosphere: an unexplained high-altitude dust cloud and an aurora that reaches deep into the Martian atmosphere. MAVEN’s mission is to help solve the mystery of how Mars lost most of its atmosphere and much of its water. These new findings are unexpected! Researchers presented the findings at the Lunar and Planetary Science Conference being held this week (March 16-20, 2015) in The Woodlands, Texas. Follow the links below to learn more: 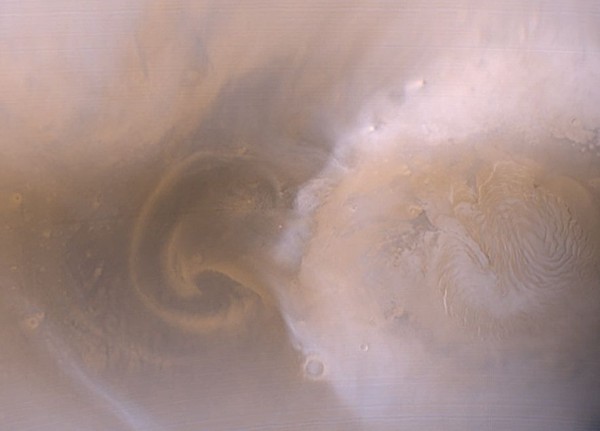 Mars is dusty. We knew that. It’s a desert world, and – when it’s spring in either hemisphere – vast dust storms spring up on the Martian surface. But we did not know that about the presence of dust so high in the Martian atmosphere.

Martian dust cloud. MAVEN observed the unexpected dust cloud at orbital altitudes from about 93 miles (150 kilometers) to 190 miles (300 kilometers) above the Martian surface. The cloud density is greatest at lower altitudes. However, even in the densest areas it is still very thin. The source and composition of the dust are unknown. Laila Andersson of the University of Colorado’s Laboratory for Atmospherics and Space Physics (CU LASP) said:

If the dust originates from the atmosphere, this suggests we are missing some fundamental process in the Martian atmosphere.

The cloud has been present the whole time MAVEN has been in operation. Scientists don’t know whether the cloud is a temporary phenomenon or something long lasting.

Possible sources for the observed dust include dust wafted up from the atmosphere; dust coming from Phobos and Deimos, the two moons of Mars; dust moving in the solar wind away from the sun; or debris orbiting the sun from comets. However, no known process on Mars can explain the appearance of dust in the observed locations from any of these sources. 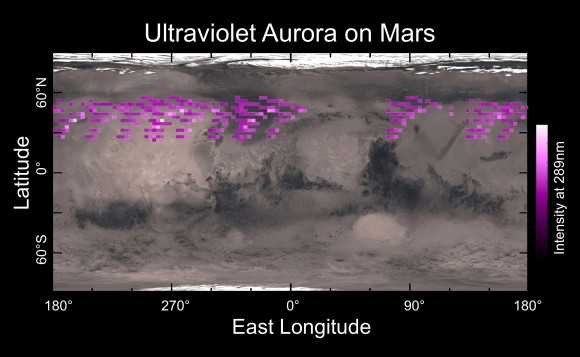 A map of IUVS’s auroral detections in December 2014 overlaid on Mars’ surface. The map shows that the aurora was widespread in the northern hemisphere, not tied to any geographic location. The aurora was detected in all observations during a 5-day period. Image credit: University of Colorado

Martian aurora. For five days just before December 25, 2014 MAVEN saw a bright ultraviolet auroral glow spanning Mars’ northern hemisphere, what scientists have named Christmas lights. Aurora – also known here on Earth as northern or southern lights – are caused by energetic particles like electrons crashing down into the atmosphere and causing the gas to glow.

Arnaud Stiepen is a MAVEN team member at the University of Colorado. He said:

What’s especially surprising about the aurora we saw is how deep in the atmosphere it occurs – much deeper than at Earth or elsewhere on Mars. The electrons producing it must be really energetic.

The source of the energetic particles appears to be the sun. An MAVEN instrument detected a huge surge in energetic electrons at the onset of the aurora. Billions of years ago, Mars lost a global protective magnetic field like Earth has, so solar particles can directly strike the atmosphere. The electrons producing the aurora have about 100 times more energy than you get from a spark of house current, so they can penetrate deeply in the atmosphere.

Bottom line: The NASA MAVEN spacecraft has observed two unexpected phenomena in the Martian atmosphere: an unexplained high-altitude dust cloud and aurora that reaches deep into the Martian atmosphere. The findings are being presented at the Lunar and Planetary Science Conference March 16-20, 2015 in The Woodlands, Texas.