People at high latitudes, including the northern U.S., might have a good chance to see the aurora – northern lights – the nights of February 17 and 18, 2011.

People at high latitudes – including some in the northern U.S. – might have a good chance to see the aurora or northern lights the nights of February 17 and 18, 2011, according to the Space Weather Prediction Center of the U.S. National Oceanic and Atmospheric Administration. 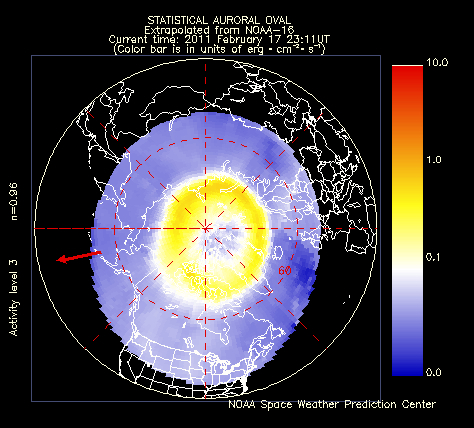 NOAA map of auroral oval in the northern hemisphere, from the NOAA POES satellite.

People see an aurora when charged particles streaming from the sun collide with gases in the upper atmosphere and appear as spectacular curtains of green light from oxygen emissions and blues and reds from nitrogen high above. What’s especially exciting is a coronal mass ejection event that was captured on Feb. 15, 2011 by the NASA Solar Dynamics Observatory spacecraft in the video below. A coronal mass ejection is a giant outburst of solar wind particles from the sun, seen here as a faint, expanding halo. The ejection shoots extra particles that strike Earth’s atmosphere and intensify the magnificent auroras for people fortunate to catch them in the night sky.