A powerful stellar explosion hundreds of years ago left behind this supernova remnant. Astronomers now believe they understand why the explosion took place.

This wonderful image – which was the Astronomy Picture of the Day (APOD) for January 25, 2011 – helped Louisiana State University (LSU) astronomers contribute to solving a long-standing mystery about Type Ia thermonuclear supernovae. This type of supernova explodes and sometimes brighten to outshine all of the other stars in its galaxy combined. The LSU astronomers determined that this particular supernova – which left behind the supernova remnant shown in this image, called SNR 0509-67.5 – originated a closely orbiting pair of white dwarf stars that spiraled in for an explosive collision. The astronomers published their result in the journal Nature on January 12, 2012. 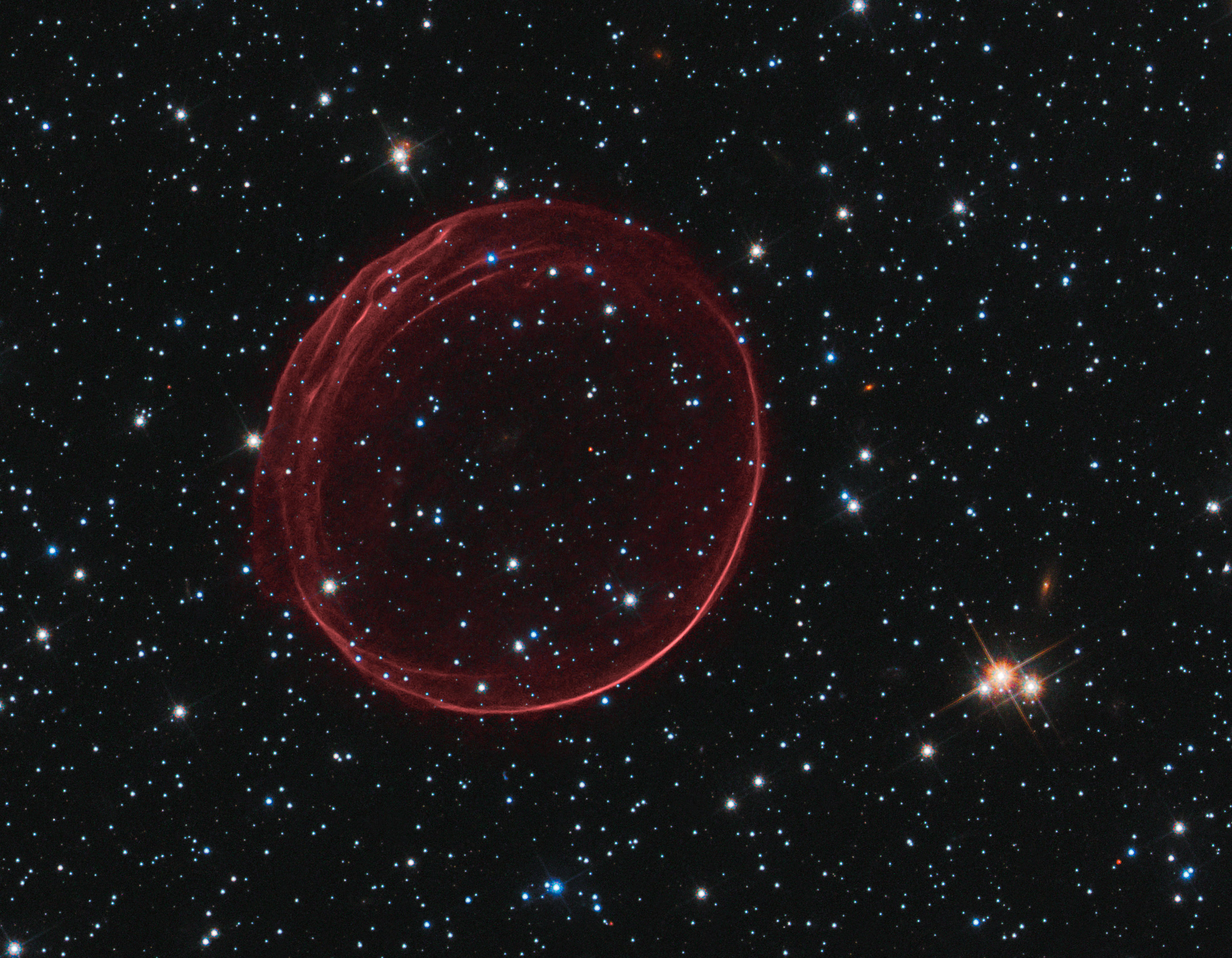 SNR 0509-67.5, a supernova remnant in the Large Magellanic Cloud. It is now a shell of tenuous gas, thought to have been ejected by the supernova 400 (±50) years ago. Image Credit: NASA, ESA, and the Hubble Heritage Team (STScI/AURA); Acknowledgment: J. Hughes (Rutgers U.)

The mystery was: how does this type of supernova blow up? What causes the explosion? Astronomers refer to this mystery as the progenitor problem.

In early 2011, astronomers Bradley E. Schaefer and Ashley Pagnotta were preparing a proposal to look deep for any ex-companion stars in the centers of four supernova remnants in the nearby Large Magellanic Cloud galaxy, including SNR 0509-67.5. The January 25, 2011 APOD showed that the Hubble Space Telescope had just taken the desired image.

From the APOD picture, the astronomers measured the center of the supernova shell with a ruler. They then calculated allowed region for the ex-companion star, and the central region was seen to be completely empty of stars.

Within half an hour of seeing the APOD picture, these astronomers realized that the image was proof that at least this particular Type Ia supernova must originated from two white dwarfs that spiraled together and exploded. Astronomers call this model to explain this type of supernova explosion the double degenerate model.

Bottom line: Astronomers at Louisiana State University happened upon a Hubble Space Telescope image of a supernova remnant that let them contribute to solving the mystery of why certain kinds of supernovae – called Type Ia supernovae – explode.

Read more about this story.