Two images of a very massive star, made 18 years apart, have given astronomers a real-glimpse of how massive stars develop early in their evolution.

View larger. | Two artists’ concepts of the massive star W75N(B)-VLA-2. At left, a hot wind from the young star expands nearly spherically, as seen in 1996. At right, the hot wind has been shaped by encountering a dusty, donut-shaped torus around the star, as seen in 2014. Image via Bill Saxton, NRAO/AUI/NSF.

Stars live and die as people do, but their lives are inconceivably long in contrast to a 100-year human lifespan. That’s why astronomers sometimes say that their best studies of the stars give them only snapshots of individual stars in one phase of its evolution or another. As the whole process unfolds, over millions or billions of years, we can’t really watch it happen. An international team of astronomers is excited, though, about a pair of images of a young and very massive star made 18 years apart. They announced this week (April 2, 2015) that the images appear dramatically different and that they provide a real-time glimpse of how massive stars develop in the earliest stages of their evolution.

The star is called called W75N(B)-VLA 2. It’s some 4,200 light-years from Earth. The astronomers studied it using the National Science Foundation’s Very Large Array (VLA), a radio telescope located on the Plains of San Agustin, some 50 miles west of Socorro, New Mexico.

They acquired a VLA image of this star in 1996, and then another in 2014. Carlos Carrasco-Gonzalez of the Center of Radioastronomy and Astrophysics of the National Autonomous University of Mexico, leader of the research team, called the comparison “remarkable.”

The 1996 image shows a compact region of a hot wind ejected from the young star.

The 2014 image shows that ejected wind deformed into a distinctly elongated shape.

Now let’s consider the theory of how such a star should develop. Scientists believe the star is forming in a dense, gaseous environment, surrounded by a doughnut-shaped, dusty torus or wheel-like structure. They believe the star has episodes in which it ejects a hot wind for several years. At first, that wind can expand in all directions, and so forms a spherical shell around the star.

But eventually the wind hits the dusty torus. That slows it down. Wind expanding outward along the poles of the torus, where there is less resistance, moves more quickly, resulting in an elongated shape for the outflow. Carrasco-Gonzalez said:

In the span of only 18 years, we’ve seen exactly what we predicted.

Read more about this study from the National Radio Astronomy Observatory. 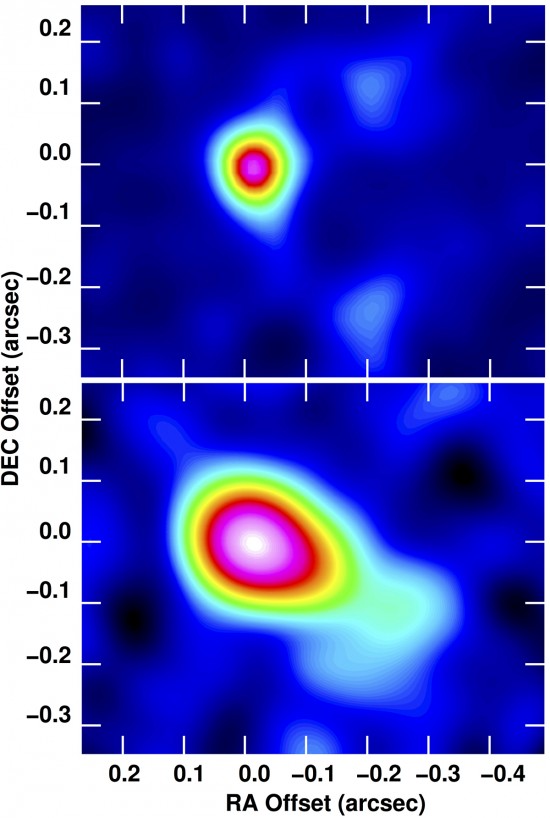 Bottom line: Two radio images – taken with the Very Large Array in New Mexico – show astronomers’ theories about how massive stars evolve to be on target.