New works suggests most observed quasar phenomena depend on two things: how efficiently a central black hole is being fed and the astronomer’s viewing orientation. 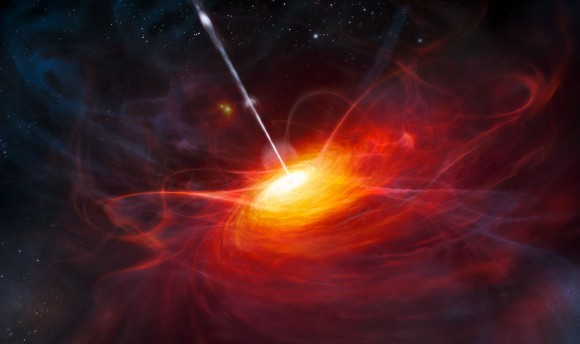 This is an artist’s concept of a quasar: a supermasive black hole at the center of a faraway galaxy. Image via European Southern Observatory

Discovered in the early 1960s, quasars are highly luminous objects shining over vast intergalactic distances. Until the early 1980s, the nature of quasars was controversial, but now most astronomers agree a quasar is a supermassive black hole in the center of a distant massive galaxy. The black hole rapidly accretes (accumulates) matter toward its center to create a quasar’s powerful luminosity. Still, mysteries about quasars have remained, and now two scientists say they’ve solved a quasar mystery that astronomers have been puzzling over for 20 years. These scientists say that most observed quasar phenomena can be unified with two simple quantities: how efficiently the central black hole is being fed and the viewing orientation of the astronomer. The journal Nature published this work on September 11, 2014.

The study comes from the Carnegie Observatories‘ Hubble Fellow Yue Shen – who describes himself as a “quasarologist” – and Luis Ho of the Kavli Institute for Astronomy and Astrophysics (KIAA) at Peking University. They note that:

Quasars are rapidly accreting supermassive black holes at the centers of massive galaxies. They display a broad range of properties across all wavelengths, reflecting the diversity in the physical conditions of the regions close to the central engine [black hole]. These properties, however, are not random, but form well-defined trends.

These “well-defined trends” are sometimes referred to as the “main sequence” of quasars. The trends were discovered more than 20 years ago, but the mystery since then has been: what causes these trends? That is the question answered by Shen and Ho.

To answer the question, they developed and conducted statistical tests on the largest and most-homogeneous sample to date of over 20,000 quasars from the Sloan Digital Sky Survey. In this way, they were able to demonstrate that one particular property – called the Eddington ratio – is the driving force behind the main sequence of quasars.

The Eddington ratio describes the efficiency of matter fueling a quasar’s central black hole. That fueling process is essentially a competition between the gravitational force pulling matter inward and the luminosity driving radiation outward. This push and pull between gravity and luminosity has long been suspected to be the primary driver behind the so-called main sequence, and Shen and Ho say their work confirms this hypothesis.

They also found that the orientation of an astronomer’s line-of-sight when looking down into the black hole’s inner region plays a key role. In this inner region of the hole, fast-moving gas produces quasar spectra with broad emission lines. Knowing that the astronomer’s orientation with respect to the quasar is key to understanding quasar spectra will help astronomers improve their measurements of black hole masses for quasars, Shen and Ho say.

Our findings have profound implications for quasar research. This simple unification scheme presents a pathway to better understand how supermassive black holes accrete matter and interplay with their environments.

And better black hole mass measurements will benefit a variety of applications in understanding the cosmic growth of supermassive black holes and their place in galaxy formation.

Bottom line: The Carnegie Observatories’ Yue Shen and Luis Ho of the Kavli Institute for Astronomy and Astrophysics at Peking University conducted extensive statistical tests of over 20,000 quasars from the Sloan Digital Sky Survey. They now say most observed quasar phenomena depend on two simple quantities: how efficiently a central black hole is being fed and the astronomer’s viewing orientation.