Astronomers have observed violent red flashes, lasting just fractions of a second, during one of the brightest black hole outbursts in recent years. 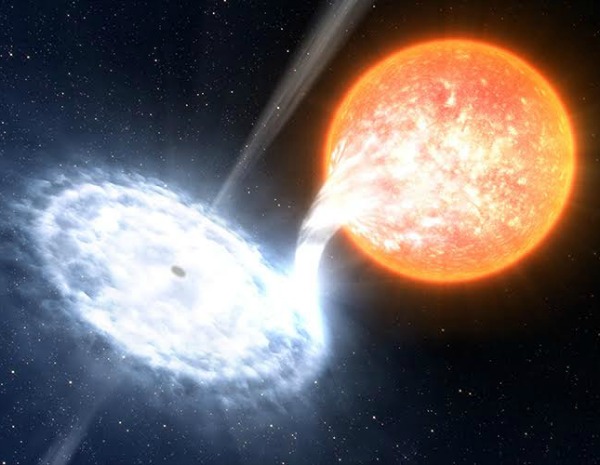 In June 2015, a black hole called V404 Cygni underwent dramatic brightening for about two weeks, as it devoured material that it had stripped off an orbiting companion star.

In a new study, published in the journal Monthly Notices of the Royal Astronomical Society on March 14, 2016, an international team of astronomers report that the black hole emitted dazzling red flashes lasting just fractions of a second, as it blasted out material that it could not swallow.

Each flash was blindingly intense, equivalent to the power output of about 1,000 suns. And some of the flashes were shorter than 1/40th of a second — about ten times faster than the duration of a typical blink of an eye.

V404 Cygni, which is about 7,800 light years from Earth, was the first definitive black hole to be identified in our galaxy and can appear extremely bright when it is actively devouring material.

The astronomers associated the red color with fast-moving jets of matter that were ejected from close to the black hole.

Dr. Poshak Gandhi, Associate Professor and STFC Ernest Rutherford Fellow in the University of Southampton’s Astronomy Group, is the lead author of the study. Gandhi said in statement:

Piecing together clues about the color, speed, and the power of these flashes, we conclude that this light is being emitted from the base of the black hole jet. The origin of these jets is still unknown, although strong magnetic fields are suspected to play a role.

Furthermore, these red flashes were found to be strongest at the peak of the black hole’s feeding frenzy. We speculate that when the black hole was being rapidly force-fed by its companion orbiting star, it reacted violently by spewing out some of the material as a fast-moving jet.

Due to the unpredictable nature and rarity of these bright black hole ‘outbursts’, astronomers have very little time to react. For example, V404 Cygni last erupted back in 1989. V404 Cygni was exceptionally bright in June 2015 and provided an excellent opportunity for such work. In fact, this was one of the brightest black hole outbursts in recent years. But most outbursts are far dimmer, making them difficult to study.

Bottom line: Astronomers have observed violent red flashes, lasting just fractions of a second, during the June 2015 outburst of a black hole called V404 Cygnis. The study was published in the journal Monthly Notices of the Royal Astronomical Society on March 14, 2016.

Read more from the University of Southampton