A new image from the Sloan Digital Sky Survey consists of 1.2 trillion pixels and covers a third of the night sky. It captures half a billion individual stars and galaxies. 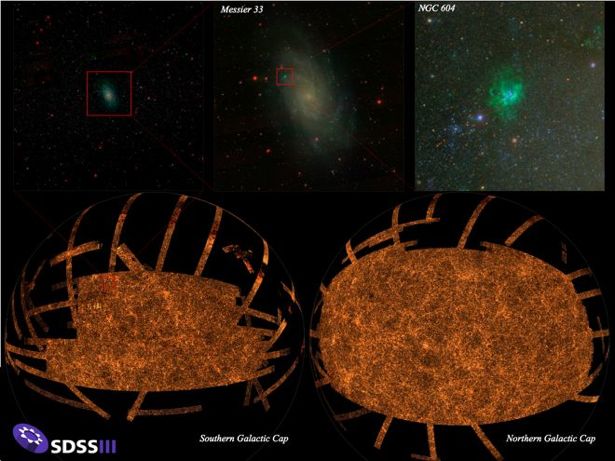 The new image, above, is created from seven million images of the night sky. It consists of 1.2 trillion pixels. It covers a third of the night sky and captures half a billion individual stars and galaxies. Every yellow dot in the image above is a galaxy. If you could zoom in on these dots, you’d find a galaxy’s detailed structure and individual star-forming regions.

Sky surveys such as the Sloan are part of a venerated tradition in astronomy. When I started in astronomy 35 years ago, one of the first things I was shown was a huge file full of glass plates. On the plates were photographs of the night sky. They were part of the National Geographic Palomar Survey, which used 14-inch square photographic plates, covering about 6° of sky per side (approximately 36 square degrees per plate).

Today’s Sloan surveys of the universe are more ambitious and technologically rich, but the principle is still the same. Since 1998, a dedicated telescope in New Mexico – with a 2.5-meter mirror – has been taking Sloan Sky Survey images. Data from these images have helped to identify hundreds of millions of cosmic objects. They’re used by professional astronomers and in citizen science projects such as Galaxy Zoo, Google Sky and World Wide Telescope.

Michael Blanton is the New York University physicist who presented the new image – biggest-ever image of the night sky – on behalf of the Sloan team earlier today to the 217th meeting of the American Astronomical Society. This annual meeting is going on now in Seattle, WA. The BBC reported that Blanton told the conference that it was “difficult to overstate the breadth” of data Sloan provides. He said that “something like 3,500 papers” by professional astronomers had been written based on the data contained within the survey.

Matthew Lehnert on the oldest known object in the universe