An image of a piece of the cosmic web

An international team of astronomers has mapped a piece of the cosmic web without using bright quasars for the first time. They did it by turning a powerful instrument to a single region of the sky for hundreds of hours. 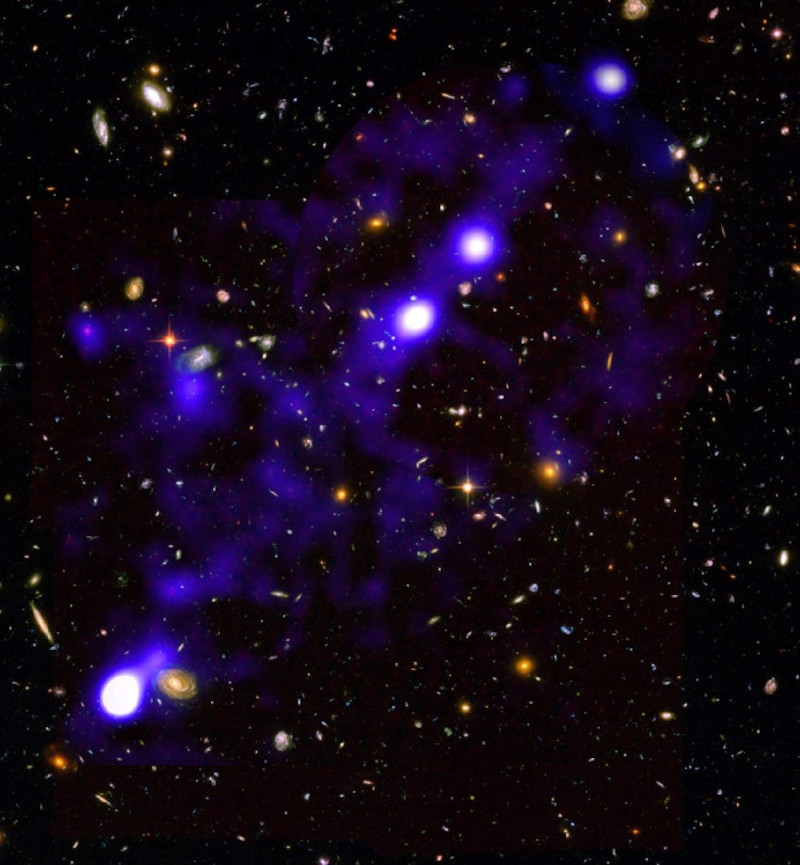 This image looks in the direction of our constellation Fornax the Furnace, to a time 2 billion years after the Big Bang. Each point of light is a galaxy. You can see a filament between the galaxies, tracing the path of the cosmic web. See the full image, below. Image (c) ESO / NASA/ Roland Bacon et al.

In recent decades, astronomers have begun speaking of the large-scale structure of our universe as a cosmic web. This great web provides the scaffolding of our universe. Its walls are made of both dark and visible matter (in the form of billions of galaxies and great quantities of gases), and giant voids are thought to lie between the web walls. Previously, astronomers have said they’ve mapped parts of the cosmic web using distant, bright quasars as a guide. On March 18, 2021, an international team of astronomers published a new study in the journal Astronomy & Astrophysics, showing an image of a piece of the cosmic web – without using bright quasars – for the first time. They did it by managing to capture the light of groups of stars and galaxies that had been scattered by gas filaments in the web.

This is light from about two billion years after the Big Bang, the event in which our universe is thought to have begun, these astronomers said.

Their study is part of what they call the MUSE Extremely Deep Field, named for the MUSE instrument (the Multi Unit Spectroscopic Explorer), which they used over six nights (between August 2018 and January 2019) mounted on the Very Large Telescope in northern Chile. They were looking toward the famous Hubble Ultra Deep Field – a mind-boggling image of tiny patch of sky, located in the direction to the southern constellation Fornax – acquired between September 2003 and January 2004.

That original Hubble image shows an estimated 10,000 galaxies. The new MUSE study shows this same patch of sky, along with visible filaments of the cosmic web. Astronomer Roland Bacon of the Centre de Recherche Astrophysique de Lyon in France led the team who made these observations. These scientists said in their paper:

Galaxies form within large cosmic filaments of gas and dark matter, which are delineated by massive bright galaxies. Smaller galaxies are also believed to gather with the massive galaxies in these filaments, but they are too faint to be observed. With the MUSE Extremely Deep Field, a 140-hour deep MUSE observation in the Hubble Ultra-Deep Field, Bacon et al. have discovered diffuse extended Ly-alpha emission from redshift 3.1 to 4.5, tracing cosmic filaments on scales of several megaparsecs [editor’s note: a megaparsec is 3,260,000 light-years] … 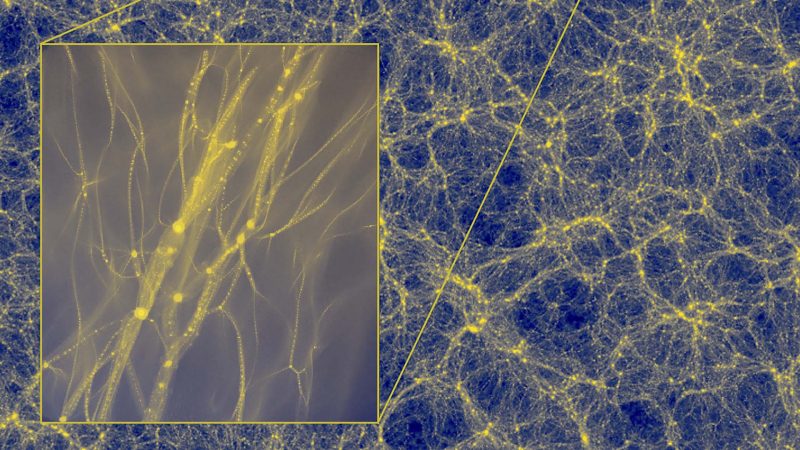 Multiple studies prior to this one suggest a weblike structure for our universe, at the largest scales. This image – generated in a 2020 study – is computer-generated. It suggests the distribution of dark matter in the universe, along with ordinary matter, takes the form of a cosmic web. Read more about this image. Image via J. Wang; S. Bose/ CfA.

The team said their observations showed that potentially more than half of the scattered light in their image comes not from large bright radiating sources like bright galaxies or quasars, but from a sea of previously undiscovered galaxies of very low luminosity that are far too dim to be observed individually. They said in a statement:

The results strengthen the hypothesis that the young universe consisted of vast numbers of, small groups of freshly formed stars.

Co-author Joop Schaye of Leiden University in the Netherlands said:

We think that the light we are seeing comes mainly from young galaxies, each containing millions of times fewer stars than our own Milky Way. Such tiny galaxies were likely responsible for the end of the cosmic dark ages, when less than a billion years after the Big Bang, the universe was illuminated and heated by the first generations of stars.

The MUSE observations thus not only give us a picture of the cosmic web, but also provide new evidence for the existence of the extremely small galaxies that play such a crucial role in models of the early universe.

These astronomers said they’d like to map larger pieces of the cosmic web. That’s why they’re working to improve the MUSE instrument so that it provides a two to four times larger field of view.

Here’s the image – part of the MUSE Extremely Deep Field – acquired by scientists in a study published in March 2021. What you’re seeing here are galaxies, connected by faint filaments – together making up “strands” in the cosmic web – extending over a distance of more than 13 million light-years. The distance shown in this image is roughly equivalent to 150 of our home galaxies (150 Milky Ways), placed back to back. Image via Bacon et al.

Bottom line: An international team of astronomers has mapped a piece of the cosmic web without using bright quasars for the first time. They did it by turning a powerful instrument on a single region of the sky for hundreds of hours.