Astronomers make most precise measurement yet of expanding universe

A new analysis says that 10.8 billion years ago, the universe was expanding by one percent every 44 million years. 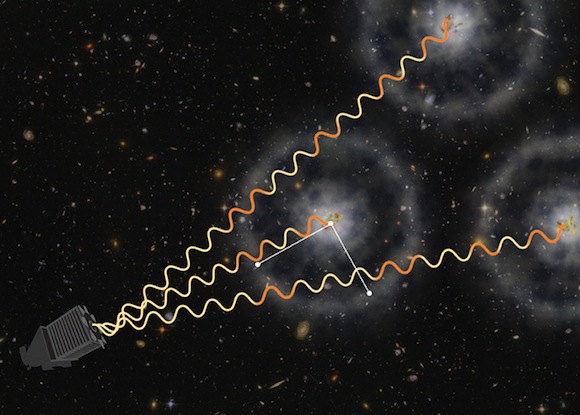 Astronomers from the Sloan Digital Sky Survey have used 140,000 distant quasars to measure the expansion rate of the universe when it was only one-quarter of its present age. This is the best measurement yet of the expansion rate at any epoch in the last 13 billion years.

The Baryon Oscillation Spectroscopic Survey (BOSS), the largest component of the third Sloan Digital Sky Survey (SDSS-III), pioneered the technique of measuring the structure of the young universe by using quasars to map the distribution of intergalactic hydrogen gas. Today, new BOSS observations of this structure were presented at the April 2014 meeting of the American Physical Society in Savannah, GA.

“If we look back to the universe when galaxies were three times closer together than they are today, we’d see that a pair of galaxies separated by a million light-years would be drifting apart at a speed of 68 kilometers per second as the universe expands,” says Font-Ribera.

BOSS determines the expansion rate at a given time in the universe by measuring the size of baryon acoustic oscillations (BAO), a signature imprinted in the way matter is distributed, resulting from sound waves in the early universe. This imprint is visible in the distribution of galaxies, quasars, and intergalactic hydrogen throughout the cosmos.

“Three years ago, BOSS used 14,000 quasars to demonstrate we could make the biggest 3-D maps of the universe,” says David Schlegel (Lawrence Berkeley National Laboratory), principal investigator of BOSS. “Two years ago, with 48,000 quasars, we first detected baryon acoustic oscillations in these maps. Now, with more than 140,000 quasars, we’ve made extremely precise measures of BAO.”

With enough good quasar spectra, close enough together, the position of the gas clouds can be mapped in three dimensions. BOSS determines the expansion rate by using these maps to measure the size of the BAO pattern at different epochs of cosmic time. These new measurements provide key data for astronomers seeking the nature of the dark energy postulated to be driving the increase in the expansion rate of the universe.