Astronomers invite you to help name exoplanets and their stars

The IAU is inviting all of us to help name exoplanets – distant planets outside our solar system – and their stars. Cool, yes? 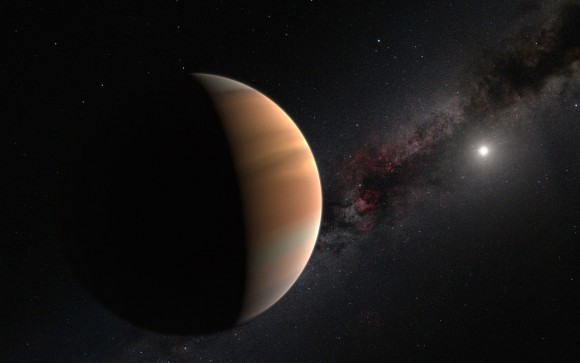 Artist’s impression of a distant exoplanet – planet beyond our solar system – orbiting its star. Via the IAU.

Since early in the 20th century, the International Astronomical Union (IAU) has taken it upon itself to be the official source of names for space objects. In response to public interest, the IAU has now organized a worldwide contest to give popular names to selected exoplanets – planets orbiting stars beyond our solar system – along with their host stars. The IAU is inviting astronomy clubs and non-profit organizations to submit the proposed names. Votes will be cast by the public from across the world through the web platform NameExoWorlds. This platform is under development by the IAU in association with Zooniverse. The intention is that millions of people worldwide will be able to take part in the vote. Once the votes are counted, the winning names will be officially sanctioned by the IAU, allowing them to be used freely in parallel with the existing scientific nomenclature, with due credit to the clubs or organizations that proposed them.

People have been naming celestial objects for millennia, long before any scientific system of names ever existed. Even today, almost every civilization and culture uses common names to describe the stars and planets visible to the naked eye, as well as their apparent distribution on the sky — constellations, asterisms, etc.

On 14 August 2013, the IAU issued a statement on the Public Naming of Planets and Planetary Satellites, which outlined a first set of rules that allowed the public to become involved in naming exoplanets. Capitalizing on the unique expertise of its members, the IAU through its Public Naming of Planets and Planetary Satellites Working Group has now developed a project in partnership with Zooniverse – home to the Internet’s largest, most popular, and most successful citizen science projects.

The NameExoWorlds contest aims at crowdsourcing the process by which public names will be given to a large sample of well-studied, confirmed exoplanets and their host stars, referred to as exoworlds. The NameExoWorlds vote is conceived as a global, cross-cultural, educational, and above all ambitious and challenging contest, both for the IAU-Zooniverse partnership, and for the public. The main steps of the contest are the following:

1. A list of 305 well-characterized exoplanets, discovered prior to 31 December 2008 [3], has been selected for naming by the IAU Exoplanets for the Public Working Group (https://www.iau.org/science/scientific_bodies/working_groups/211) and is being published today on the https://www.NameExoWorlds.org website. These exoplanets belong to 260 exoplanetary systems comprising one to five members, in addition to their host star.

2. In parallel, an IAU Directory for World Astronomy website is being prepared (https://directory.iau.org). This site will open in September 2014, and astronomy clubs and non-profit organizations interested in naming these exoplanets will be invited to register. The IAU will have the capability to handle the registration of thousands of such groups.

3. In October 2014, these clubs or organizations will be asked to vote for the 20-30 exoworlds they wish to name out of the list provided by the IAU. The actual number will depend on how many groups have registered.

4. From December 2014, these clubs or organizations will be able to send in proposals for the names of members and host stars of these selected exoworlds, based on the rules in the IAU Exoplanet Naming Theme (https://www.iau.org/public/themes/naming_exoplanets), together with a detailed supporting argument for their choice. Each group will be allowed to name only one exoworld. More details on this stage will be given later.

From March 2015, the general public will be able to vote to rank the proposed exoworld names. The IAU and Zooniverse will be ready to handle a million votes or more worldwide.

Starting from July 2015, the IAU, via its Public Naming of Planets and Planetary Satellites Working Group, will oversee the final stages of the contest, and will validate the winning names from the vote.

The results will be announced at a special public ceremony held during the IAU XXIX General Assembly in Honolulu, USA, 3-14 August 2015.

The IAU further said that the naming process will take place on the NameExoWorlds website. They are asking for volunteers to translate the content into different languages in order to offer everyone the opportunity to take part in the contest (volunteer translators may email cjl@astro.ox.ac.uk).

The winning names will not replace the scientific designations, which already exist for all exoplanets and their host stars, but they will be sanctioned by the IAU as their adopted names, and be publicized as such, along with due credit to the astronomy clubs or organizations that proposed them. These public names may then be used freely worldwide, along with, or instead of, the original scientific designation. It is expected that the winning names for the 20-30 systems will reflect the diversity of cultures on all continents. The press releases also said:

The IAU is excited that the general public will be able to participate in this new and ambitious global challenge. Other contests may be organized after 2015. In the meantime, stay tuned for announcements about the next steps towards the first NameExoWorlds contest.

Bottom line: The International Astronomical Union (IAU) announced on July 9, 2014 that it has developed a plan for public participation in the naming of exoplanets – distant planets outside our solar system – and their stars. Their worldwide NameExoWorlds contest will open in September 2014.