It’s one of those things that just makes you smile because it shouldn’t exist, or rather, you don’t expect it to exist, one of the astronomers said.

When I heard that a team of astronomers from Australia, Germany, Switzerland and Finland had discovered a rare emerald-cut galaxy, I hoped for an emerald green color (even though I know stars are not supposed to come in the color green). In the case of the dwarf galaxy LEDA 074886, though, emerald-cut refers to the galaxy’s shape, which is rectangular with the corners truncated. 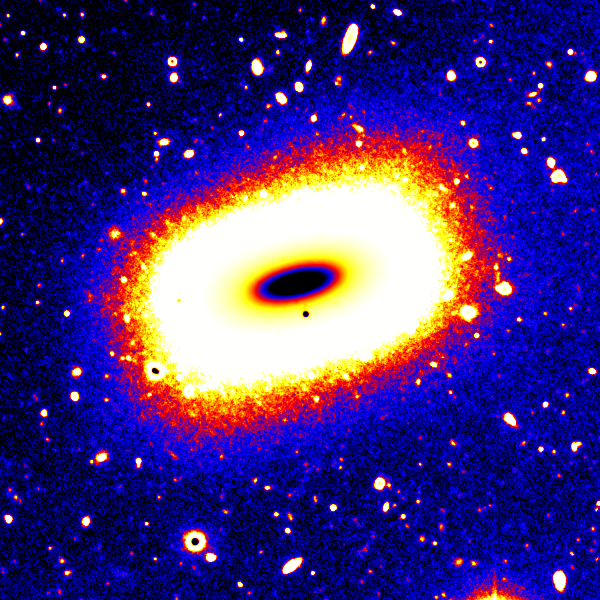 Gemstones whose outlines are either square or rectangular often have their corners truncated – creating a so-called emerald-cut, because this cut is often used with emerald gemstones – because sharp corners are points of weakness where a gemstone might cleave or fracture. In the case of the galaxy LEDA 074886 – located some 70 million light-years from Earth – there’s no telling at this point why it looks this way. In fact, Professor Alister Graham of Swinburne University of Technology in Australia – lead author of the paper describing the research – commented in a press release:

It’s one of those things that just makes you smile because it shouldn’t exist, or rather, you don’t expect it to exist.

And remember the galaxy’s appearance depends on our vantage point in space. No telling how it looks from other vantage points. We seem to be looking at it face-on. The astronomers are saying it might resemble an inflated disk seen side-on, like a short cylinder. Dr. Graham said this galaxy’s discovery allows astronomers to obtain useful information for modeling other galaxies – in other words, using a computer to study and predict galaxies’ intricate shapes.

After all, galaxies are like snowflakes in that, although there are three primary types of galaxies (spiral, elliptical and irregular), each galaxy has its own unique appearance.

LEDA 074886 is said to have 50 times fewer stars than our own Milky Way galaxy. The astronomers say its distance from Earth is equivalent to that of 700 of our Milky Way galaxies placed end-to-end.

The astronomers also say this galaxy’s shape might have been caused by the collision of two spiral galaxies. They point out that our own Milky Way is due to collide with the Andromeda galaxy many millions of years from now. They said:

When our own disk-shaped Milky Way galaxy collides with the disk-shaped Andromeda galaxy in about three billion years from now, we may become inhabitants of a rectangular-looking galaxy.

Bottom line: The dwarf galaxy LEDA 074886 appears from our earthly vantage point to be “emerald-cut,” that is, rectangular with the corners truncated. It might be the result of a collision of two spiral galaxies. An international team of astronomers using the Suburu Telescope found it.

Read more about the emerald-cut galaxy from Subaru Telescope