Astronomers at the Space Telescope Science Institute in Baltimore, Md., announced last week (October 6, 2011) that visual evidence for two exoplanets – or planets orbiting distant suns – had been uncovered in Hubble Space Telescope data from 1998. The two planets orbit the young star HR 8799, which lies 130 light-years away.

A team using Hawaii’s ground-based W. M. Keck and Gemini North observatories spotted the star’s three outer planets in 2007 and 2008, and its innermost planet in 2010. In 2009, David Lafreniere of the University of Montreal uncovered the star’s outermost known planet in the 1998 Hubble images; STScI’s Remi Soummer and his team improved upon his techniques to find two more planets.

HR 8799 and its system are captured in infrared light by the ground-based Keck telescope in 2008. The points marked b, c and d are the star’s outermost planets, discovered in 2008. Credit: W. M. Keck and Gemini North Observatories

In the original Hubble images, taken with the Near Infrared Camera and Multi-Object Spectrometer (NICMOS), light from the HR 8799, which has a mass approximately one-and-a-half times that of our sun, obscures the faint glow of its planets with a brightness approximately 100,000 times as great as its satellites. Recent software improvements have allowed astronomers to remove much of the light, leaving the planets visible.

The original image of HR 8799 is dominated by the brightness of this star, so that any inner planets cannot be seen.

Though the overall size of HR 8799’s planetary system is comparable to our own solar system, the planets’ individual orbits are much longer. The three outer planets are known to have orbits of approximately 400 years, 200 years, and 100 years, respectively. 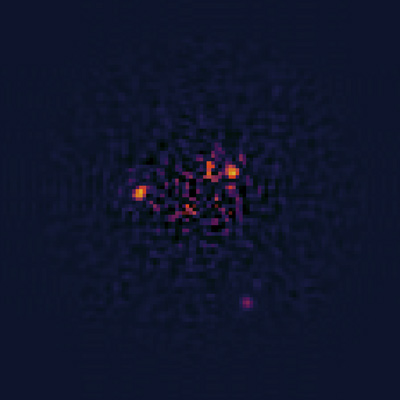 The 1998 image with much of the starlight removed via software processing made possible by technological advances in 2011. Credit: NASA, ESA, and R. Soummer (STScI)

Revealing the planets’ positions in 10-year-old data allows astronomers to compare their positions in current images, which helps the scientists better understand the system as a whole. Remi Soummer said in a STScI press release:

Unfortunately, the star’s innermost planet is positioned in such a way that the new technique still won’t reveal its position. When Hubble took the original shot, it used a coronagraph – an instrument that blocks out light emitted by a star’s actual surface – within its camera to block some of the light from the star. But HR 8799’s closest known planet lies within the area blocked by the coronagraph.

An artist’s concept of the HR 8799 system

This discovery is just the start for Soummer’s team, which included recent graduates from Goucher College. The team plans to assemble a list of planetary candidates for ground-based telescopes to confirm by applying their new method to approximately 400 other stars in the NICMOS archive.

HR 8799’s system is the only multiplanet system outside our own for which astronomers have obtained visual snapshots.

Bottom line: The Space Telescope Science Institute in Baltimore announced on October 6 that visual evidence for two exoplanets had been uncovered in Hubble Space Telescope data from 1998. The two planets orbit the young star HR 8799, which lies 130 light-years away. In 2009, David Lafreniere of the University of Montreal uncovered the star’s outermost known planet in the 1998 Hubble images; STScI’s Remi Soummer and his team improved upon his techniques to find two more planets.