A team of astronomers has discovered a planet outside our solar system, 100 light-years away, that resembles a young Jupiter. 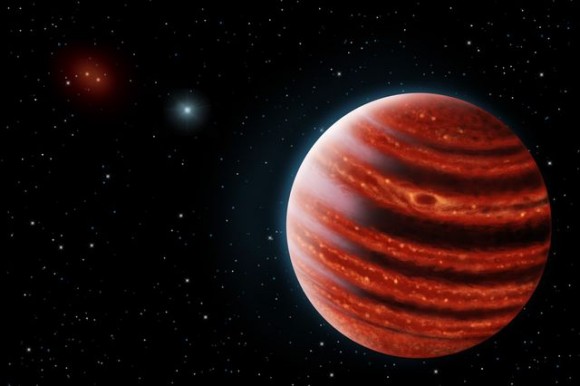 An artist’s conception of the Jupiter-like exoplanet 51 Eridani b, seen in the near-infrared light that shows the hot layers deep in its atmosphere glowing through clouds. Image credit: Danielle Futselaar and Franck Marchis/SETI Institute

An international team of astronomers has discovered an exoplanet 100 light years away that shares many of the characteristics of a young Jupiter. The work appears in the August 13 online edition of Science.

The exoplanet – a planet outside our solar system – is called 51 Eridani b. It is only 20 million years old — a mere infant by astronomy standards. (Jupiter, the sun and Earth are all about 4.5 billion years old.)

It is the first planet detected by the Gemini Planet Imager, or GPI, which was designed to discover and analyze faint, young planets orbiting bright, nearby stars.

GPI’s highly advanced spectrometer revealed that the planet has the strongest concentration of methane ever detected on a planet outside the Milky Way — as well as the presence of water — which indicates that it’s similar to planets in our solar system and should yield additional clues about how the planet formed.

The newly discovered planet orbits a little farther from its parent star than Saturn does from the sun. It is roughly twice the mass of Jupiter. Until now, the gas giant planets that have been directly detected have been much larger — five to 13 times Jupiter’s mass, said the researchers.

The scientists reported that 51 Eridani b has a temperature of 800 degrees Fahrenheit, hot enough to melt lead, but still rather cold compared with other gas giants, which reach temperatures above 1,000 degrees. Previous Jupiter-like exoplanets have shown only faint traces of methane, far different from the heavy methane atmospheres of the gas giants in our solar system.

Astronomers believe that the gas giants in our solar system formed by building up a large core over a few million years and then pulling in a huge amount of hydrogen and other gasses to form an atmosphere. But the Jupiter-like exoplanets that have been discovered so far are much hotter than models have predicted, hinting that they could have formed much faster as material collapses quickly to make a very hot planet. The core-buildup process can also form rocky planets like the Earth, while the process of fast-collapsing materials might make only giant gas planets, the researchers said. 51 Eridani b is young enough to reveal clues about how it was created.

This planet really could have formed the same way Jupiter did; the whole solar system could be a lot like ours.

There are hundreds of planets a little bigger than Earth, but so far no way to know if they are “super-Earths,” or micro-sized gas and ice planets like Neptune, or something different altogether, he said.

GPI was installed on the 8-meter Gemini South Telescope in Chile in 2013, and its science operation began in 2014. The GPI team has studied almost 100 stars already.James Graham is a University of California Berkeley professor and GPI’s project scientist. Graham said:

This is exactly the kind of planet we envisioned discovering when we designed GPI.

Bottom line: An international team of astronomers has discovered an exoplanet 100 light years away that shares many of the characteristics of a young Jupiter. The work was published in Science on August 13, 2015.