When our sun and planets were born, the Kepler-444 system was already older than our solar system is now. 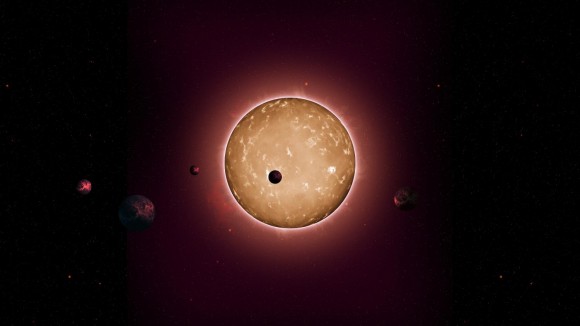 The star Kepler-444 is now known to host five Earth-sized planets in very compact orbits. The planets were detected from the dimming that occurs when they transit the disk of their parent star, as shown in this artist’s conception. Image via Tiago Campante/Peter Devine

Ancient galactic civilizations have been a staple of science fiction stories for decades. Now science fiction writers can turn to an actual known star for inspiration, an old star with a system of Earth-sized planets, just announced this week. These planets are presently the oldest known to astronomers. Orbiting the old sunlike star Kepler-444, they date back to the dawn of our Milky Way galaxy itself and suggest that planets have formed throughout the history of our galaxy and universe.

The discovery, announced January 27, 2015 in the Astrophysical Journal, used observations made by NASA’s Kepler spacecraft over a period of four years.

The five planets in the Kepler-444 system are all a bit smaller than Earth, with sizes varying between those of Mercury and Venus. Kepler-444 formed 11.2 billion years ago, when the universe was less than 20% of its current age. Presumably its planets formed around the same time. The Kepler-444 system was already older than our own solar system is today when our sun and planets were born.

Dr. Daniel Huber from the University of Syndey in Australia is an author on the paper. Huber said:

We’ve never seen anything like this. It is such an old star and the large number of small planets make it very special.

It is extraordinary that such an ancient system of terrestrial-sized planets formed when the universe was just starting out, at a fifth its current age. Kepler-444 is two-and-a-half times older than our solar system, which is only a youthful 4.5 billion years old.

This tells us that planets this size have formed for most of the history of the universe and we are much better placed to understand exactly when this began happening.

To determine the age of the star and planets, team used asteroseismology — a technique that involves listening to the host star’s oscillations – natural resonances, which are caused by sound trapped within it

These oscillations lead to minuscule changes or pulses in the star’s brightness and let the researchers measure the star’s diameter, mass, and age. The presence and size of the planets is detected by the dimming that occurs when the planets pass across the face of the star. This fading in the intensity of the light received from the star enables scientists to measure the sizes of the planets relative to the size of the star with accuracy. Dr. Huber said:

Asteroseismology allows us to precisely measure the radius of Kepler-444 and hence the sizes of its planets. For the smallest planet in the Kepler-444 system, which is slightly larger than Mercury, we measured its size with an uncertainty of only 100 km.

It was clear early on that we had discovered something very unusual because we had five planets orbiting a very bright star — one of the brightest Kepler has observed. It is fantastic that we can use asteroseismology to date the star and determine just how old it is.

In the case of Kepler-444, the researchers said, the planets orbit their parent star in less than 10 days, at less than one-tenth the Earth’s distance from the sun. Their closeness to their host star means they are uninhabitable because of the lack of liquid water and high levels of radiation.

Dr. Tiago Campante, the research leader from the University of Birmingham said:

We now know that Earth-size planets have formed throughout most of the universe’s 13.8-billion-year history, which could provide scope for the existence of ancient life in the galaxy.

Bottom line: Astronomers have found the oldest planets yet known in our Milky Way galaxy. The Kepler-444 system was already older than our own solar system is today when our sun and planets were born.