They believe there’s unexpected dark matter – or black holes – in the mysterious clusters orbiting the center of the giant galaxy Centaurus A. 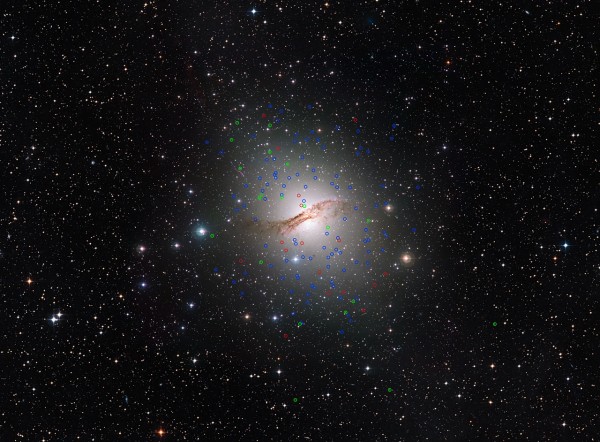 Giant elliptical galaxy Centaurus A (NGC 5128) and its strange globular clusters, via ESO

Centaurus A – a giant galaxy, 5th brightest galaxy in Earth’s sky beyond our Milky Way – continues to surprise us. Now astronomers observing with the European Southern Observatory’s Very Large Telescope in Chile say they’ve discovered a new class of globular star clusters orbiting the center of Centaurus A. They’re calling them dark globular clusters. These mysterious objects look similar to normal clusters, but have much more mass than expected. The astronomers speculate the mysterious clusters might harbor dark matter, or contain massive black holes. They announced their work today (May 13, 2015).

The elliptical galaxy Centaurus A (also known as NGC 5128) is the closest giant galaxy to the Milky Way. It’s thought to have as many as 2,000 globular clusters. Many of these globulars are brighter and more massive than the 150 or so globulars orbiting our Milky Way.

Astronomer Matt Taylor of the Pontificia Universidad Catolica de Chile in Santiago is lead author of the new study. He and his team made detailed studies of 125 globular star clusters orbiting the center of Centaurus A.

The team then compared the masses of the clusters they studied with how brightly each cluster shines, and, in this way, made their unexpected discovery. The astronomers said in a statement:

For most of the clusters in the new survey, the brighter ones had more mass in the way that was expected; if a cluster contains more stars, it has greater total brightness and more total mass.

But for some of the globulars something strange showed up. They were many times more massive than they looked. And even more strangely, the more massive these unusual clusters were, the greater the fraction of their material was dark. Something in these clusters was dark, hidden and massive. But what?

… Perhaps the dark clusters contain black holes, or other dark stellar remnants in their cores? This may be a factor that explains some of the hidden mass, but [our] team concludes that it cannot be the whole story. What about dark matter? Globular clusters are normally considered to be almost devoid of this mysterious substance, but perhaps, for some unknown reason, some clusters have retained significant dark matter clumps in their cores.

This would explain the observations but does not fit into conventional theory.

Our discovery of star clusters with unexpectedly high masses for the amount of stars they contain hints that there might be multiple families of globular clusters, with differing formation histories. Apparently some star clusters look like, walk like, and smell like run-of-the-mill globulars, but there may quite literally be more to them than meets the eye.

M13, aka the Great Cluster in Hercules, is an ordinary globular cluster orbiting the center of our Milky Way. All globulars look similar to this, like starry dandelions on the verge of losing their seeds. Here’s how you can find M13 in your sky. Photo via Bareket Observatory in Israel, via CelestronImages.

Amateur astronomers love to observe the globular star clusters that orbit our Milky Way galaxy’s center. They are beautiful – huge balls of thousands of stars – and similar clusters are thought to orbit most galaxies.

When our galaxy originally collapsed into a flat disk from the primordial gases from which it was made, the globular star clusters are thought to have formed first, above and below the disk. Thus they are among the oldest known stellar systems in our galaxy – and, by extension, in the universe at large. They’ve survived through almost the entire span of galaxy growth and evolution. That’s one reason astronomers like Mike Taylor want to study them. He said:

Globular clusters and their constituent stars are keys to understanding the formation and evolution of galaxies. For decades, astronomers thought that the stars that made up a given globular cluster all shared the same ages and chemical compositions — but we now know that they are stranger and more complicated creatures.

Isn’t that true of everything astronomers study in detail? In fact, up to now, astronomers have studied star clusters to the detail acquired in this study only within own own Local Group of galaxies. The relatively small distances to Local Group galaxies make direct measurements of globular cluster masses possible.

Centaurus A, on the other hand, is an isolated, massive elliptical galaxy just outside the Local Group. It’s thought to be about 12 million light-years away.

Yet these astronomers were able to estimate masses of globular clusters orbiting Centaurus A by pushing their instruments to their limits.

Bottom line: Astronomers have discovered a new class of globular star clusters, which they’re calling dark globular clusters, orbiting the giant galaxy Centaurus A. These objects have more mass than is visible. They believe there’s unexpected dark matter, or black holes, in these mysterious clusters.