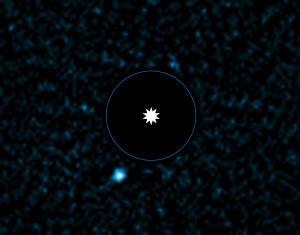 This image from ESO’s Very Large Telescope (VLT) shows the newly discovered planet HD95086 b, next to its parent star. The observations were made using NACO, the adaptative optics instrument for the VLT in infrared light, and using a technique called differential imaging, which improves the contrast between the planet and its dazzling host star. The star itself has been removed from the picture during processing to enhance the view of the faint exoplanet and its position is marked. The exoplanet appears at the lower left. The blue circle is the size of the orbit of Neptune in the Solar System. The star HD 95086 has similar properties to Beta Pictoris and HR 8799 around which giant planets have previously been imaged at separations between 8 and 68 astronomical units. These stars are all young, more massive than the Sun, and surrounded by a debris disc.

Thank you! Your submission has been received!
Oops! Something went wrong while submitting the form.
END_OF_DOCUMENT_TOKEN_TO_BE_REPLACED