A newly found planet orbits two suns – like the fictional Tatooine, home world of Luke Skywalker in Star Wars. EarthSky spoke to one of the discoverers.

Science fiction has become reality in the announcement today by NASA that a planet far, far away is the first ever discovered to orbit two suns, just like the fictional Tatooine, home world of Luke Skywalker in the movie Star Wars. NASA’s Kepler mission, featuring a planet-hunting spacecraft, discovered this world unlike any known so far.

Astronomer Alan Boss of the Carnegie Institution for Science co-authored the study released today (September 15, 2011) in the journal Science. He told EarthSky:

The amazing thing is, the stars at the center of the system – there are two of them – are of very different masses, so they have very different colors. If you were living on one of those satellites (planets), every time your satellite rotated around, you would see these two stars come up in the morning and set at night.

And it’d be quite a spectacular sight. In fact, it would change, because the planet’s period would not be locked up with the stars’ rotation period. So one time you would see the two stars rise essentially simultaneously. The next time it would be a couple of hours between when one star comes up and the next one. So it would be very unpredictable sunrises and sunsets, which would wreak havoc on cocktail hour for that planet. 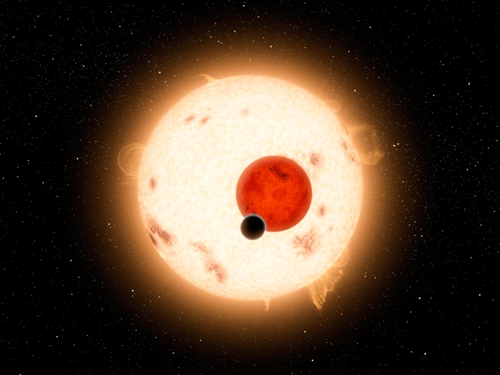 Astronomers call this planet Kepler 16-b. It is about 200 light-years from Earth, in the direction of our earthly constellations Lyra and Cygnus.

Unlike the hot desert world of Tatooine, Kepler 16-b is a frigid planet with surface temperatures of -150 degrees Fahrenheit. Being on its surface would be much like experiencing a cold day in Antarctica. This newly-discovered planet resembles our solar system’s planet Saturn in that both Saturn and Kepler 16-b are gas giant worlds and both have roughly the same mass. But Saturn, and of course Earth, orbit only one star. Kepler 16-b is in a stable, near-circular orbit of two stars.

Unlike on Tatooine, a Tusken Raider isn’t likely to roam the icy, gaseous planet Kepler 16-b.

The two parent stars of Kepler-16b form what’s called a close binary system. In other words, it’s a double star system where two stars are so close to each other that they not only chase each other in orbit, but one star actually pulls gas and charged particles from the other. Boss talked more about the planet’s unusual orbit around two stars:

It actually is on a fairly stable circular orbit, much like our own Earth orbit around the sun, even though the two stars in the center are doing their own thing, wobbling around each other with a somewhat eccentric orbit.

Two suns would make for amazing sunsets and sunrises.

Dr. Boss added that this Star Wars planet has stumped astronomers like a Jedi mind trick, in that they have no idea how a planet could form in a system with two stars.

Theorists have had a hard time understanding how the planets in our solar system formed. And now they’re sort of hopelessly far behind with these literally thousands of extra-solar planets discovered from ground-based studies and from Kepler space-based results.

And the most amazing aspect of this whole thing is that basically, anywhere you can think of looking for a planet – anywhere it could have a nice, stable orbit – we often start finding them. We find planets around dwarf stars, around giant stars. We find them around single stars, binary stars, and now we find them around close binary stars. It’s just amazing that practically every little niche that could be populated by a planet, Mother Nature has seen fit to go ahead and put some planets there for us.

So it’s quite startling, especially when you realize that 16 years ago you had no evidence for any other planets around sun-like stars. And now, we have thousands of examples of planets. They’ve been there all this time. We just didn’t know that they were there. It’s kind of like the whole universe, a cloak is being pulled away from our eyes. We’re seeing the universe with new eyes and realizing there are planets in orbit around just about every star you see when you look up in the sky. There are planets around just about every one of them.

Bottom Line: NASA announced the first-ever planet discovered to orbit two suns, just like the fictional home world of Luke Skywalker in the movie Star Wars. It expands the possibilities for planetary systems waiting to be discovered by astronomers.

Alan Boss says universe could be crowded with Earth-like planets