Astronomers announced both the biggest and the most distant galaxy clusters to date.

Announcements of two groundbreaking galaxy clusters came today at the American Astronomical Society (AAS) meeting in Austin, Texas. First, astronomers using the Hubble Space Telescope have imaged the most distant galaxy cluster to date, a grouping of five galaxies 13.1 billion light-years away. Hubble is seeing the developing cluster, or protocluster, as it looked just 600 million years after the Big Bang. Astronomers presume it has now developed into a supercluster like the relatively nearby Virgo Cluster, which contains more than 2,000 galaxies. 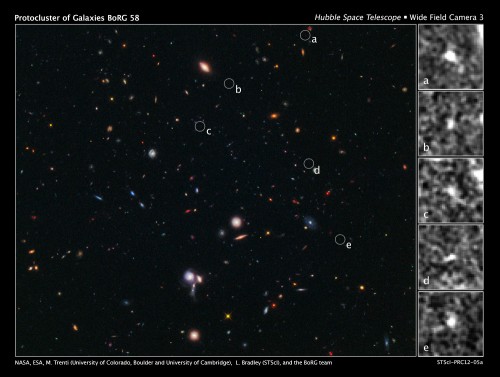 Though the five galaxies range from one-half to one-tenth the size of the Milky Way, they are comparable in brightness. Simulations show that the galaxies are that bright because of their mergers with other galaxies. Eventually, they will form a giant central galaxy.

These galaxies formed during the earliest stages of galaxy assembly, when galaxies had just started to cluster together. The result confirms our theoretical understanding of the buildup of galaxy clusters. And, Hubble is just powerful enough to find the first examples of them at this distance.

Astronomers at NASA and the European Space Agency (ESA) used Hubble’s Wide Field Camera 3 (WFC3) to take the image. The camera, installed during the 2009 servicing mission, replaced the Wide Field Planetary Camera 2 and can see in near-infrared light, making it ideal for studying objects like very young galaxies.

Second, astronomers using the European Southern Observatory’s Very Large Telescope (VLT) in Chile’s Atacama Desert have discovered an extremely hot galaxy cluster, the largest ever seen in the distant universe. The cluster is seven billion light-years away and has been nicknamed “El Gordo” – “the big one” or “the fat one” in Spanish. 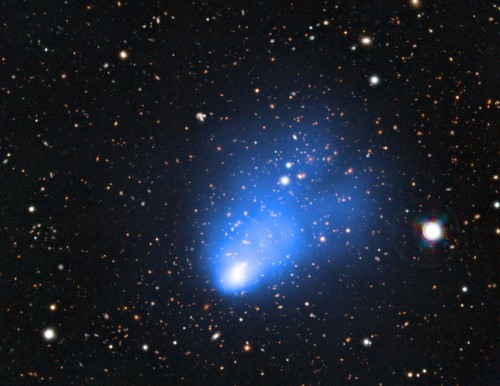 El Gordo is actually two subclusters colliding at speeds of millions of miles per hour. A team led by Felipe Menanteau of Rutgers University, which included Chilean and Rutgers astronomers, found it by detecting distortions in the universe’s cosmic background radiation left over from the Big Bang.

This cluster is the most massive, the hottest, and gives off the most X-rays of any cluster found so far at this distance or beyond. We devoted a lot of our observing time to El Gordo, and I’m glad our bet paid off and we found an amazing cluster collision.

Galaxy clusters are the largest objects in the universe held together by gravity. How they form and interact with each other is largely dependent on the surrounding dark energy and dark matter, which makes studying the clusters important to our understanding of both.