It looks like an artist’s illustration, but it’s a real image and it lets us glimpse the process by which planets are born in orbit around their stars. 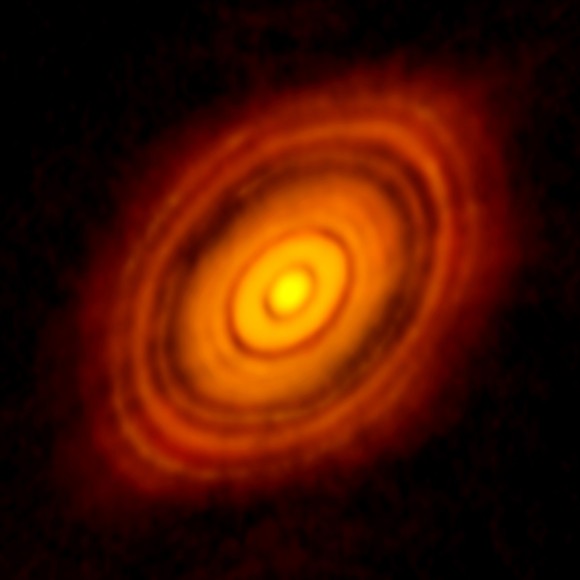 View larger. | ALMA image of young star HL Tau and its planet-forming disk. Notice the multiple rings and gaps. This means planets are now emerging in the disk, and they are in the process of sweeping their orbits clear of dust and gas. Image via ALMA (NRAO/ESO/NAOJ); C. Brogan, B. Saxton (NRAO/AUI/NSF)

Even for most astronomy enthusiasts, it can be tricky sometimes to distinguish between artist’s illustrations and real images, in part because the artist’s illustrations have gotten so good and so plentiful in recent years. And so one question we’re frequently asked: “Is this a real image?” The image at the top of this post may look at first glance like an artist’s illustration. But it’s not. It’s a real image of a planet-forming disk around the infant star, in this case a sunlike star approximately 450 light-years from Earth, known to astronomers as HL Tau. The Atacama Large Millimeter/submillimeter Array (ALMA) in Chile has recently been upgraded to obtain such sharp images. Its North American managers at the National Radio Astronomy Observatory (NRAO) say this image is:

… the best image ever of planet formation around an infant star…

It is impressive. It reveals in great detail what astronomers just a few decades ago were only theorizing about, and that is that all stars are believed to form within slow-spinning clouds of gas and dust. As the clouds spin, they flatten out into these disks. Over time, the dust particles in the cloud begin to stick together by a process known as acretion, and that process is what ultimately forms the planets like our Earth, and moons like our moon, plus the asteroids, all of which mostly still move (as they did in the original cloud) in this flat space – this disk-like space – encircling the parent star.

Notice, in the image, that you can see multiple concentric rings separated by clearly defined gaps. These structures suggest that planet formation is already underway around this young star. ALMA Deputy Director Stuartt Corder said in an announcement released this morning (November 6, 2014):

These features are almost certainly the result of young planet-like bodies that are being formed in the disk. This is surprising since HL Tau is no more than a million years old and such young stars are not expected to have large planetary bodies capable of producing the structures we see in this image.

And so you see that even this one very sharp image already does what science so often does: gives us more questions. How can such a young star be so far advanced in planet formation, and what does that mean for the formation of planets generally throughout our galaxy?

You might also want to know that, at optical wavelength, the star HL Tau can’t be seen at all. It’s hidden in visible light behind a massive envelope of dust and gas, a very vast cloud in space, perhaps in which many stars are forming. But ALMA can see it, because it observes at much longer wavelengths, toward the radio end of the electromagnetic spectrum.

The ALMA telescope recently had its ability to see in detail upgraded, and, in fact, this image was made as part of the testing and verification process for the telescope’s new high-resolution capabilities. NRAO says these capabilities were achieved by:

… spacing the antennas up to 15 kilometers apart. This baseline at millimeter wavelengths enabled a resolution of 35 milliarcseconds, which is equivalent to a penny as seen from more than 110 kilometers away.

These long baselines fulfill one of ALMA’s major objectives and mark an impressive technological and engineering milestone. Future observations at ALMA’s longest possible baseline of 16 kilometers will produce even clearer images and continue to expand our understanding of the cosmos.

And thus we move onward in astronomy! What an exciting time to be cosmos-watchers.

Bottom line: The recently upgraded ALMA telescope in Chile has obtained what they say is the best-ever image of a planet-forming disk, around the sunlike star HL Tau, located 450 light-years away in the direction of the constellation Taurus the Bull. It is an impressive image and gives us a glimpse of the process by which planets are born in orbit around their stars.