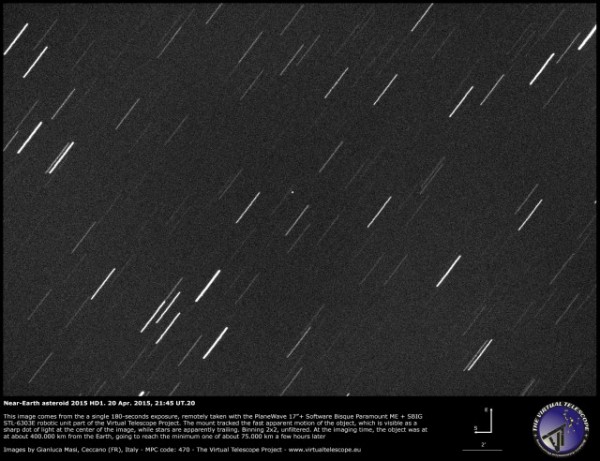 On Tuesday morning according to U.S. clocks – at approximately 3 a.m. CDT, or 8 UTC – a small and very faint asteroid passed just 0.2 lunar distances or 45,600 miles (73,400 km) above Earth’s surface. That’s about twice as far as geostationary satellites. The Mt. Lemmon Survey, based in Tucson, Arizona, first saw this asteroid three days ago, on April 18.

The asteroid was expected to reach climb briefly to magnitude +13.2 – much too faint to see with the eye alone. The Virtual Telescope Project viewed the asteroid last night and provided the image above. Read their report. 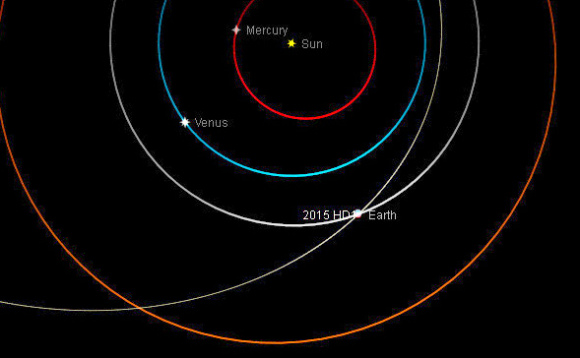 A close pass by asteroid 2015 HD1 on Tuesday. Image via Virtual Telescope Project

The asteroid passed mostly unseen by us on Earth. Bob King at Universe Today reported:

Maximum brightness and visibility occurs between about 1 and 3 a.m CDT (6-8 UT) for observers in low northern or southern latitudes. From the West Coast, the asteroid will be low in the southwestern sky around 10 p.m. local time. Hawaiian skywatchers will get the brightest views with the asteroid highest in the sky around 9 p.m. local time. IF you live in the eastern two-thirds of the U.S., it’s either too far south or will have set by the time it’s bright enough to see.

As seen on the sky’s dome, the asteroid moved rapidly across the constellations Hydra, Antlia and Puppis, but again … it was much too faint to see with the eye.

What if asteroid 2015 HD1 had come closer? What if it had entered our atmosphere?

In that case, for an asteroid this size, Earth’s atmosphere would have done its job in protecting us. Asteroids the size of this one have been known to enter our atmosphere and break apart due to friction with the air. If this one had done so, it might have created a big bang – a sonic boom, – in our atmosphere, but would likely have done little harm on Earth’s surface, assuming it did not strike over a populated area.

That was the case on February 15, 2013, when an asteroid not very different in estimated size from asteroid 2015 HD1 entered Earth’s atmosphere over a populated part of Russia. The shock wave from that 2013 asteroid – now called the Chelyabinsk meteor for the region in Russia it affected – broke windows in some 7,200 buildings in six cities. Over 1,500 people were injured, mostly minor injuries from flying glass.

The Chelyabinsk meteor was able to do so much damage in part because of the high speed and shallow angle of its entry, which caused it to explode in an air burst, which created its powerful shock wave. In that way, it was much like the Tunguska meteor, which killed reindeer and flattened trees in northern Russia in 1908.

These sorts of events – small bodies colliding with Earth’s atmosphere – are actually pretty common. In April 2014, evidence from the Nuclear Test Ban Treaty Organization, which operates a network of sensors that monitors Earth around the clock listening for the infrasound signature of nuclear detonations, reported 26 atom-bomb-scale asteroid impacts in Earth’s atmosphere since 2000. Nearly all of these objects went unnoticed, except by people who might have witnessed them as superbolides – extremely bright meteors – flashing across the sky. Of course, most entered over an ocean, and no one saw them.

It’s actually quite encouraging that the Mt. Lemmon Survey in Tucson was able to find this small asteroid and track its path at all. Just a few decades ago, astronomers were not watching so closely for asteroids, and little ones like this must have passed us millions (billions?) of times in Earth history. Governments only became convinced of the need to find and track close-passing asteroids recently, and only in recent decades have applied funds to the effort.