Asteroid Vesta now has its own geologic maps

Vesta is revealed as a world in space – albeit a little world – in these new maps of its surface. Scientists say the maps of Vesta reveals its history. 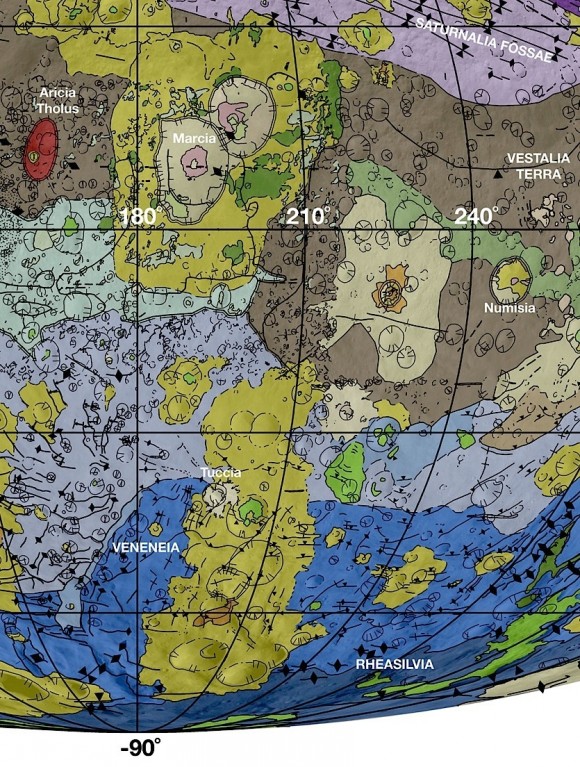 In this detail from the new geologic map of Vesta, brown represents the oldest, most heavily cratered surface. Purple and light blue represent terrains modified by the Veneneia and Rheasilvia impacts, respectively. Light purples and dark blues below the equator represent the interior of the Rheasilvia and Veneneia basins. Greens and yellows represent relatively young landslides or other downhill movement and crater impact materials, respectively. Tectonic features such as faults are shown by black lines. Image via NASA/JPL-Caltech/Arizona State University

One of the largest asteroids – one of the first to have been discovered in the year 1807 – is 4 Vesta. It’s the second-most-massive asteroid after the dwarf planet Ceres, comprising some 9% of the known mass of the asteroid belt. And if that makes it seem big, well, it’s not. Its mean diameter is only 326 miles (525 km). Now even this little world has its own set of geological maps, released this week (November 17, 2014), made possible since the Dawn spacecraft arrived at Vesta in July 2011. The new maps of Vesta are included with a series of 11 scientific papers published this week in a special issue of the journal Icarus.

A team of 14 scientists mapped the surface of Vesta using Dawn spacecraft data. What do the maps show us that the photos of Vesta don’t? Scientists use geological mapping as a way to learn the geologic history of a planetary body. David A. Williams of Arizona State University, Tempe was one of the team leaders of the mapping effort. He said in a press release:

The geologic mapping campaign at Vesta took about two-and-a-half years to complete, and the resulting maps enabled us to recognize a geologic timescale of Vesta for comparison to other planets.

Vesta’s geologic timescale is determined by a sequence of large impact events to the asteroids surface, primarily via three objects, whose resulting craters on Vesta are now called Veneneia, Rheasilvia and Marcia.

Veneneia is the oldest of these three craters. It’s 250 miles (400 km) wide. The Rheasilvia crater is younger, which can be seen because it lies on top of Veneneia. Rheasilvia is nearly as wide as Vesta itself – 310 miles (500 km) wide. It’s centered near Vesta’s south pole. Finally, there’s Marcia, created most recently via an impact to Vesta by a smaller body, interesting in part because it’s one of a series of three craters known as “Vesta’s snowman.” Meanwhile, the oldest crust on Vesta pre-dates the Veneneia impact. 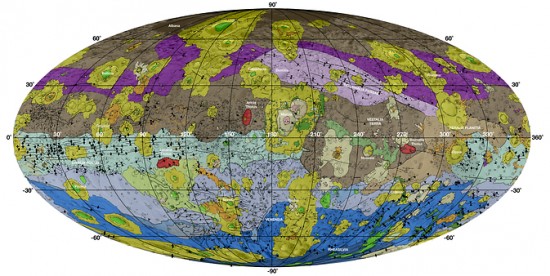 NASA said in a press release about the new Vesta maps:

Asteroids like Vesta are remnants of the formation of the solar system, giving scientists a peek at its history. Asteroids could also harbor molecules that are the building blocks of life and reveal clues about the origins of life on Earth.

By the way, the scientists involved with the mapping did name some features on Vesta. Other names were recommended by the IAU Working Group on Cartographic Coordinates and Rotational Elements.

Dawn orbited Vesta beween July 2011 and September 2012. Then Dawn left Vesta orbit and headed off toward another body in the asteroid belt, the dwarf planet Ceres.

Dawn will arrive at Ceres in March 2015. 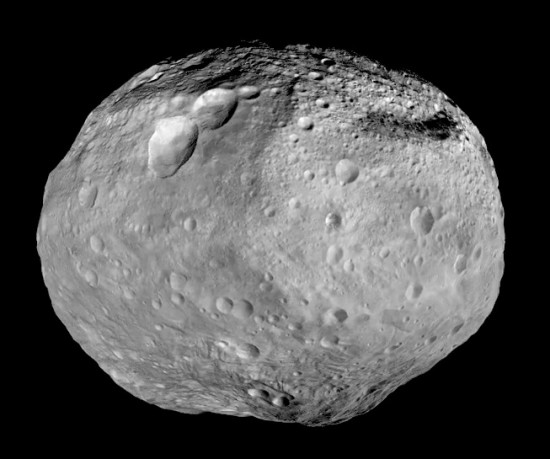 Dawn studied Vesta from July 2011 to September 2012. The towering mountain at the south pole — more than twice the height of Mount Everest — is visible at the bottom of the image. The set of three craters known as the “snowman” can be seen at the top left. Image via NASA/JPL

Bottom line: Vesta is revealed as a world in space – albeit a little world – in these new geologic maps of its surface. Scientists say the maps of Vesta reveals its history.