Asteroid passes by Earth on May 14

But, contrary to some media reports, asteroid 1999 FN53 will not “skim” our planet. 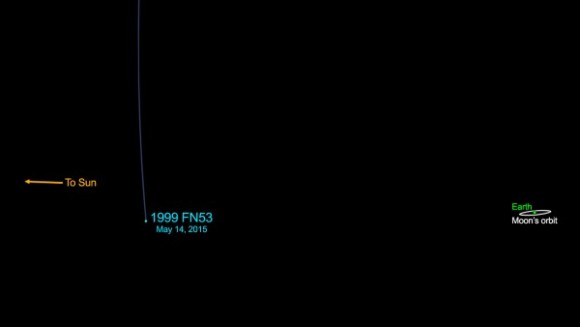 A space rock has caused quite a fuss in recent days. Some media reports (for example, here) have reported “worried astronomers” due to a “gigantic missile” that will “skim the Earth” today (May 14, 2015). But those assertions are misleading or incorrect. The asteroid has now been captured in radar images from Arecibo Observatory in Puerto Rico. The real facts are that asteroid 1999 FN53 will safely pass by Earth today no closer than 6.3 million miles away (10 million kilometers), which means the space rock will not be in close proximity and will not “shave Earth.”

New radar observations from Arecibo Observatory suggest that asteroid 1999 FN53 is a very large one, however, about 800 to 900 meters (3,000 feet, or almost a kilometer) wide. These observations confirm it will pass at more than 26 times the Earth-moon distance, so that impact probability is zero.

Arecibo has been tracking this asteroid since May 12 and will continue observing the space rock until tomorrow, May 15. Astronomers were able to send radio signals which bounced on 1999 FN53 allowing them to get preliminary radar images that show the space rock’s shape. The radar observations suggest the asteroid completes a rotation every 3.5 hours. 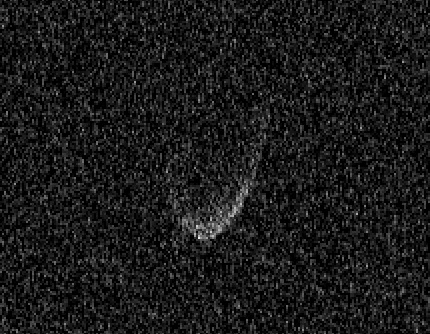 NASA has said asteroid 1999 FN53 is not classified as Potentially Hazardous because the asteroid does not approach within 4.7 million miles (7.5 million kilometers) of Earth. Paul Chodas, manager of NASA’s Near-Earth Object Program Office, at the Jet Propulsion Laboratory in Pasadena, California, said in a statement on May 13:

We can compute the motion of this asteroid for the next 3,000 years and it will never be a threat to Earth. This is a relatively unremarkable asteroid, and its distant flyby of Earth tomorrow is equally unremarkable.

Asteroid 1999 FN53 was initially discovered from Lowell Observatory in Arizona.

Another asteroid known as 5381 Sekhmet will pass by Earth on this Sunday, May 17, 2015. Although this other object will pass at a huge distance of 62.8 lunar distances, the 2.1-kilometer-wide asteroid grabs the attention of astronomers because it is binary, which means it is being orbited by a secondary space rock. The double space rock was originally detected in 2003 from Arecibo Observatory.

As of today, there is no known asteroid that posses any danger to our planet, but scientists continue to study these solar system’s objects as new ones (especially small ones) are being discovered. Bigger asteroids are a lot easier to detect.

The beautiful images in the video below show the Arecibo Observatory in action. Sequence captured by Juan Gonzalez Alicea of the Sociedad de Astronomía del Caribe (SAC) with a Canon 7D camera.