Once they looked, astronomers began finding many asteroids near Earth. The one passing Sunday, June 8 is an especially big one, found only two months ago. 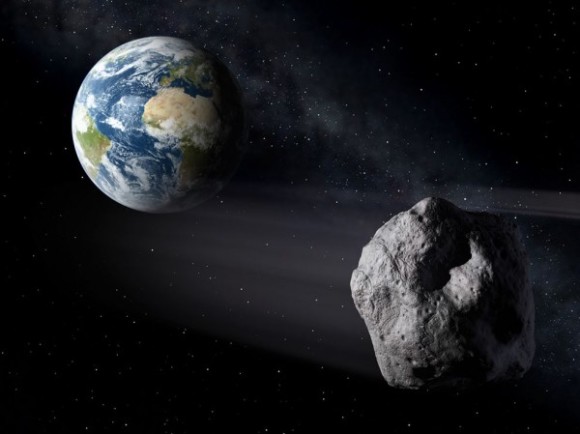 Artist’s concept of near-Earth asteroid, like 2014 HQ124, which will pass closest to Earth on June 8 at 3.3 lunar distances. By P. Carril and ESA.

The Chelyabinsk meteor that exploded over Russia in February 2013 – breaking windows in some 7,200 buildings in six cities across the region and injuring some 1,500 people – was an estimated 20 meters in diameter. This weekend, an asteroid more than 10 times larger will sweep silently past Earth, at a safe distance. Astronomers are taking special note of this object because they discovered it only two months ago. They’ve nicknamed it the Beast. It’s a reminder that we live in a cosmic shooting gallery, a solar system where unknown asteroid behemoths still glide unseen.

The information about HQ124 presented here is from NASA’s Near-Earth Object Program.

NASA’s Wide-field Infrared Survey Explorer (WISE) satellite picked up its movement against a fixed backdrop of stars in April 2014.

And that’s scarily recent, for the discovery of such a big asteroid. Astronomers say they’re confident we know approximately 90 percent of the potentially dangerous asteroids that are 1,000 meters (3,200 feet) and over in diameter. Those asteroids have the potential to destroy continents on impact, and, fortunately, none are headed our way for the foreseeable future.

However, that leaves the city-destroyers – the asteroids closer to the size of HQ124. Astronomers believe they know only 30 percent of the 140-meter (460-foot) asteroids that may lurk within our solar system, on Earth-crossing paths. And they say they know fewer than 1 percent of the 30-meter (100-foot) Earth-crossers. Bob Berman, an astronomer with Internet astronomy outreach venture Slooh, told National Geographic:

If [the Beast] were to impact us, the energy released would be measured not in kilotons like the atomic bombs that ended World War II, but in H-bomb type megatons.

In other words, if it were to hit us (which it won’t, this time), it would be catastrophic for Earth, with the potential to wipe out an entire city.

Will we see it from Earth as it passes? As usual, no. The asteroid is far too faint and distant to view even with most small telescopes.

Bottom line: Once astronomers started looking, they began finding many asteroids near Earth. The asteroid 2014 HQ124 – which is passing Sunday, June 8 – is an especially big one. And astronomers found it only two months ago.