Earth will give this spacecraft a gravity boost today 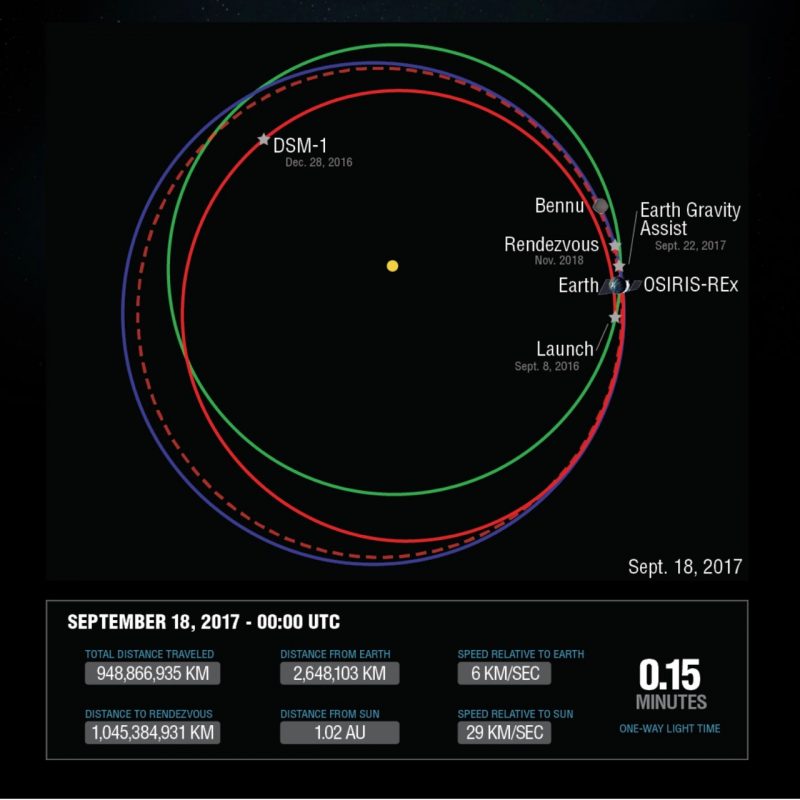 NASA’s asteroid sample return mission, OSIRIS-REx, will pass about 11,000 miles (17,000 km) above Earth just before 16:52 UTC on September 22, 2017. That’s 12:52 p.m. on Friday in the U.S. Eastern Daylight time zone. OSIRIS-REx is a first of its kind mission for NASA, launched from Earth one year ago, due to arrive at asteroid Bennu in 2018. The September 22 Earth flyby will give the spacecraft a momentum boost – called a gravity assist or a gravity slingshot – toward its goal. In other words, the craft will come just close enough to Earth to be slung, via Earth’s gravity, outward again on a slightly different trajectory and with a greater speed than before.

Experienced observers are beginning to catch OSIRIS-REx in the sky. How to spot OSIRIS-REx on its September 22 flyover, and submit images. 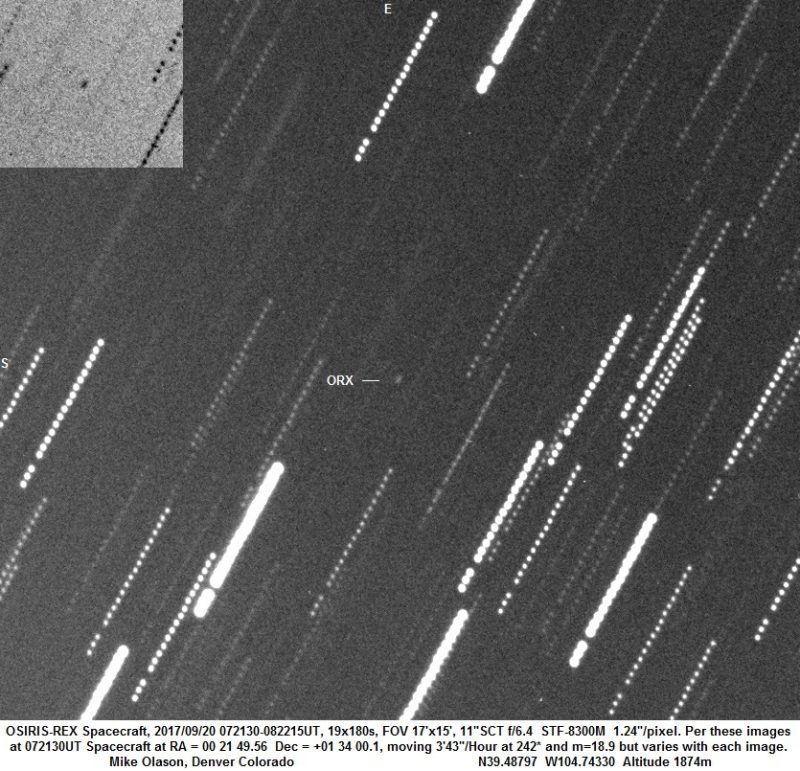 Mike Olason in Denver, Colorado caught OSIRIS-REx with a telescope and CCD camera on September 20, 2017. He wrote: “The image is an average of 19 images (each image is 3 minutes) stacked. The sequence shows 1 hour in the life of the spacecraft. The spacecraft is moving to the west-southwest (west is down and south is left) in this image.”

On Sept. 20, Mike Read imaged me cruising along with the Spacewatch 0.9-m telescope on Kitt Peak: https://t.co/582fJGNZKl #SpotTheSpacecraft pic.twitter.com/VFp00sRQig

The mission is inviting the public to mark the OSIRIS-REX flyover by participating in a Wave to OSIRIS-REx social media campaign. Individuals and groups from anywhere in the world are encouraged to take photos of themselves waving to OSIRIS-REx, share them using the hashtag #HelloOSIRISREx and tag the mission account in their posts on Twitter (@OSIRISREx) or Instagram (@OSIRIS_REx). NASA said:

Participants may begin taking and sharing photos at any time—or wait until the OSIRIS-REx spacecraft makes its closest approach to Earth at 12:52 p.m. EDT on Friday, September 22.

I'm only 2.6 million km (1.6 million miles) from home, and my blinker is on for #EarthGravityAssist on Friday! https://t.co/rACre4nDe4 pic.twitter.com/XcA4Yxdksy

OSIRIS-REx stands for Origins, Spectral Interpretation, Resource Identification, and Security – Regolith Explorer. Big name, and it’s a big mission because, so far, humanity has collected samples of five worlds in our solar system, other than Earth. There are the moon rocks, of course. Unmanned spacecraft have also visited a comet, Wild 2 – and another asteroid, 25143 Itokawa – and returned samples to Earth. Plus scientists believe we have samples of the asteroid Vesta, and the planet Mars, in the form of meteorites that have fallen to Earth from space.

OSIRIS-REx’s mission is to rendezvous with asteroid Bennu, survey its surface, collect samples and deliver them safely back to Earth.

But first it has to get there. Bennu’s orbit around the sun is tilted six degrees in comparison to Earth’s. The gravity assist will change OSIRIS-REx’s trajectory to put the spacecraft on a course to match the asteroid’s path and speed. Dante Lauretta, OSIRIS-REx principal investigator at the University of Arizona, said in a statement:

The Earth gravity assist is a clever way to move the spacecraft onto Bennu’s orbital plane using Earth’s own gravity instead of expending fuel.

Do you have a telescope, a camera & an interest in astronomy? You may be able to spot me during #EarthGravityAssist: https://t.co/pBrLONBImM pic.twitter.com/SIruFeun9v

The team has already made multiple adjustments to the spacecraft’s path since launch on September 8, 2016. The largest was a deep space maneuver on December 28, 2016, that changed the speed and path of the spacecraft to target Earth for the flyby. There have also been three trajectory correction maneuvers – one on October 7, 2016, one on January 18, 2017, and another on August 23, 2017 (30 days before the gravity assist) – that further refined the spacecraft’s trajectory in preparation for the flyby …

To properly target the Earth gravity assist, the navigation team calculates any required amount of change in the spacecraft’s course and speed. This information is then translated by the operations team into commands that are uploaded to the spacecraft and executed by firing the spacecraft’s rocket engines.

After traveling almost 600 million miles [nearly a billion km], OSIRIS-REx will approach Earth at a speed of about 19,000 mph [30,000 kph]. The spacecraft will fly over Australia before reaching its closest point to Earth over Antarctica, just south of Cape Horn, Chile.

For about an hour, NASA will be out of contact with the spacecraft as it passes over Antarctica. OSIRIS-REx uses the Deep Space Network to communicate with Earth, and the spacecraft will be too low relative to the southern horizon to be in view with either the Deep Space tracking station at Canberra, Australia, or Goldstone, California.

NASA will regain communication with OSIRIS-REx at 17:40 p.m. UTC, roughly 50 minutes after closest approach (translate to your time zone).

At 20:52 p.m. UTC, four hours after closest approach, OSIRIS-REx will begin science observations of Earth and the moon to calibrate its instruments.

Only 12 hours until my closest approach! Here's my flight path over Earth's surface during #EarthGravityAssist. https://t.co/WILhxSfgjU pic.twitter.com/KE2oK5uNto