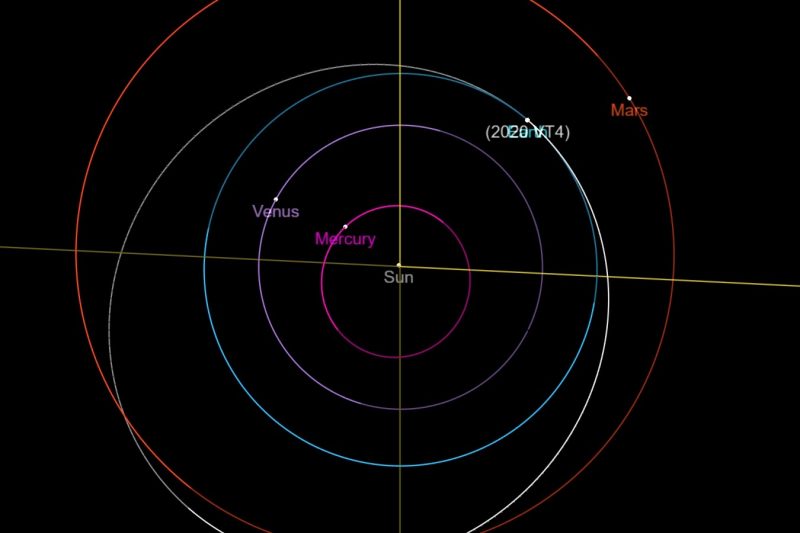 Astronomers are looking with better and better technology, and thus they’re finding smaller and smaller asteroids skimming close to Earth. Astronomers with the Asteroid Terrestrial-impact Last Alert System (ATLAS) survey in Mauna Loa, Hawaii, detected a new asteroid on November 14, 2020. After an analysis of the space rock’s orbit, they realized its closest approach had occurred one day earlier, on Friday, November 13, 2020. This Friday the 13th asteroid was initially designed as A10sHcN. Now it has an official asteroid designation, 2020 VT4. Astronomers estimate its size as between 16 and 36 feet (5-11 meters). The space rock swept closest at just 4,197 miles (6,754 km) from Earth’s center (just 238 miles or 383 km over Earth’s surface)!

It passed at about the same height as the orbit of the International Space Station (ISS), but there was no collision, of course. Was a collision ever likely? Space is so big – and the space station and asteroid are both so relatively small – that it would be extremely unlikely for an asteroid of this size to collide with the space laboratory. However, it’s not impossible, and the space station has had close calls in the past, mostly with other orbiting human-made debris. During closest approach of asteroid 2020 VT4 over the South Pacific, ISS was orbiting over Tierra Del Fuego, South Argentina. The two weren’t exactly worlds apart, but they were a long way apart.

Chart showing 6 closest non-impacting asteroids; of these 2020 VT4 is the closest. To make this chart interactive, go to 2020 VT4’s Wikipedia page.

That said, this asteroid did come very close to Earth. It came so extremely close that it was passing Earth’s thermosphere, an atmosphere layer at 50 to 440 miles (80 to 700 km) above Earth’s surface. Click here for a great chart showing layers of the atmosphere to scale.

Passing at just 238 miles high, the asteroid was not far from the 50 to 70 miles height where most space rocks disintegrate as meteors. In fact, had it penetrated Earth’s atmosphere, the space rock would have caused an impressive meteor, visible even in broad daylight.

Was Earth in danger? No. A space rock of this size has no chance of reaching Earth intact; instead, our atmosphere protects us. If it had been closer to the 50-to-70 mile asteroid-disintegration height in the atmosphere, asteroid 2020 VT4 would have mostly vaporized, due to friction with the air, although there would have been a good probability of fragments from the asteroid reaching Earth’s surface as meteorites, in this case most likely over the ocean.

Observations indicate that 2020 VT4 was an Apollo-type asteroid that completed a revolution around the sun every 1.5 years. However, Earth’s gravity perturbed the space rock trajectory, and it should now be an Aten-type asteroid, with a new orbit of about 10 months.