2018 GE3 swept by at half the moon’s distance Sunday, just hours after being detected. Its size is 3 to 6 times that of the space rock that penetrated the skies over Chelyabinsk, Russia, in 2013.

Illustration of the orbit of asteroid 2018 GE3. The orbit appears to extend to the inner part of the asteroid belt between Mars and Jupiter. Image via Tomruen/Wikimedia Commons.

A medium-sized asteroid buzzed by Earth just hours after being detected this weekend. First observed at Catalina Sky Survey in Arizona on Saturday, April 14, 2018, the asteroid – which has been labeled 2018 GE3 – swept past us at about half the Earth-moon distance early Sunday morning according to clocks in North America. Closest approach to Earth occurred at around 2:41 a.m. EDT (6:41 UTC; translate UTC to your time) on April 15.

With an estimated diameter of 157 to 361 feet (48 to 110 meters), asteroid 2018 GE3 has about three to six times the diameter of the space rock that penetrated the skies over Chelyabinsk, Russia in February 2013, causing some 1,500 people to seek treatment for injuries, mostly from flying glass.

If the asteroid had entered our atmosphere, a great portion of the space rock would have disintegrated due to friction with the air. However, some of an asteroid this size might have gotten through to Earth’s surface, and an asteroid this big is capable of causing some regional damage, depending on various factors such as composition, speed, entry angle, and location of impact. It might make you feel better (or worse) to know that asteroids enter Earth’s atmosphere unnoticed on a fairly regular basis.

For example, in 2014, scientists announced 26 atom-bomb-scale asteroid impacts since 2000 that were discovered in data from the Nuclear Test Ban Treaty Organization, which operates a network of sensors that monitors Earth around the clock listening for the infrasound signature of nuclear detonations. Earth’s atmosphere does a good job of protecting us from incoming asteroids. Most explode high in the atmosphere, or over an ocean, and therefore do no harm.

Was Earth in danger from 2018 GE3? Not this time, but a Chelyabinsk-type event can clearly repeat. Astronomers have increased their programs to seek near-Earth asteroids like 2018 GE3, but sometimes – like this time and as in 2013 with the Chelyabinsk event – asteroids do still surprise us.

A preliminary analysis of the orbit of 2018 GE shows this is the closest this particular space rock has come to Earth at least since 1930. 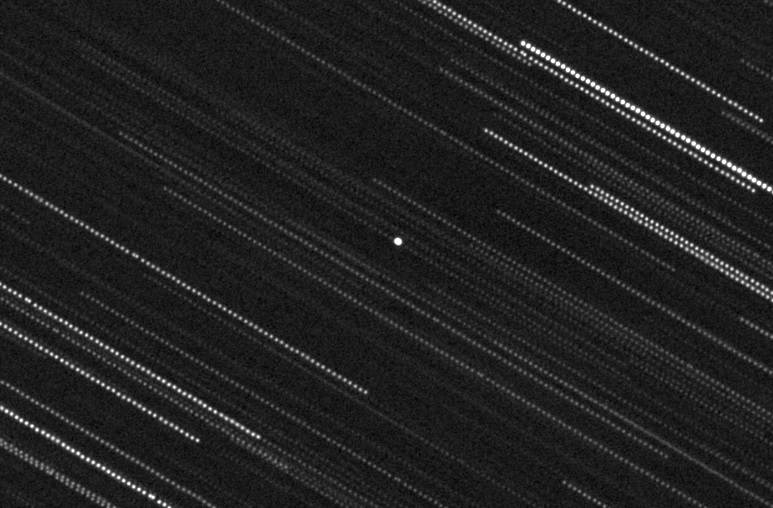 Bottom line: Asteroid 2018 GE3 swept by at half the moon’s distance Sunday, just hours after being detected.