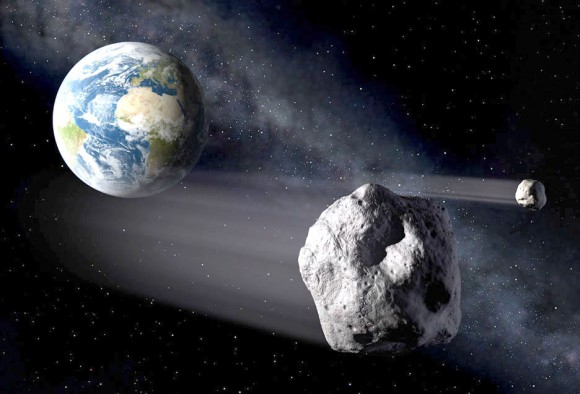 Artist’s concept of asteroids passing Earth. They come in all sizes. 2015 VY105, which passed on November 14-15, was just a little one. Via ESA/P.Carril.

The Catalina Sky Survey in Arizona was the first to observe asteroid 2015 VY105. The International Astronomical Union’s Minor Planet Center announced its discovery. According to the Minor Planet Center, the space rock is an Apollo type, a class of asteroid that sometimes intercept Earth’s orbit.

Was Earth threatened? No. This was a very small asteroid, and if it had entered our atmosphere, most of it would have disintegrated due to air friction, causing quite an impressive meteor.

Because our planet is over 70% covered by oceans, in such a case there is a high probability that any huge meteor event from asteroid 2015 VY105 would have occurred over the seas.

Were satellites at risk? There are thousands of satellites orbiting our planet, and space is vast. So it’s very unlikely for a satellite to be hit by an object … but it’s not impossible. In 2009, a few hours after the operators of a communications satellite noticed their Iridium 33 satellite had gone silent, they got bad news. Agencies that track space debris found detected the Iridium 33 satellite in several pieces. It was hit by Kosmos 2251, a Russian satellite that was slowly loosing height after it became non-operational.

So if your satellite TV service is not working, first check your wiring connections before blaming asteroid 2015 VY105. There are no reports of satellites being damaged by this space rock that came at just 0.09 lunar distances.

In October 2008, a small asteroid called 2008 TC3 entered Earth’s atmosphere and disintegrated over Sudan, Africa just 19 hours after being first detected. With an estimated size of 13 feet (4 meters), the space rock caused no damage. However, several fragments were later found and studied.

Potential damages caused by a bigger asteroid would depend on many factors including size, composition, speed, and entry angle. But 2008 TC3 – as well as this week’s close call (2015 VY105) – are both very small asteroids.

A much-bigger asteroid passed at a greater distance on October 31. Asteroid 2015 TB145 passed farther than the moon, but, because of its size, it was seen by both professional observers and amateurs with medium sized telescopes.

This Halloween asteroid – 2015 TB145 – was found to be spherical in shape and much larger than the little asteroid that passed this weekend. It was found to be approximately 2,000 feet (600 meters) in diameter in contrast to some 10 to 30 feet (3 to 9 meters) for this weekend’s close-passing space rock.

Despite its much-larger size, 2015 TB145 was detected just 3 weeks prior to closest approach. We are fortunate it passed at a safe distance: a reminder of how important it is to support and improve the asteroid detection programs.