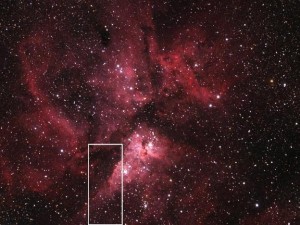 This image shows asteroid 2012 DA14 and the Eta Carinae Nebula, with the white box highlighting the asteroid’s path. The image was taken using a 3″ refractor equipped with a color CCD camera. The telescope is located at the Siding Spring Observatory in Australia and is maintained and owned by iTelescope.net.

Thank you! Your submission has been received!
Oops! Something went wrong while submitting the form.
END_OF_DOCUMENT_TOKEN_TO_BE_REPLACED