An asteroid you might not have known to worry about has been given the all-clear.

New data from Gemini Observatory in Hilo, Hawaii suggests that 2011 AG5 – an asteroid that caused some excitement among astronomers due to its potential to collide with Earth in 2040 – will in fact not collide with Earth in 2040. As of today (December 21, 2012), this asteroid has been given the all-clear. It has been removed from the Sentry Risk Table and has a new rating of 0 on the Torino Scale.

A team of astronomers from the University of Hawaii’s Institute for Astronomy made the observations showing that 2011 AG5 is no longer a significant risk for 2040. Their press release said this conclusion prompted …

… a collective sigh-of-relief. Previously, scientists estimated that the risk of this 140-meter-diameter (about the length of two American football fields) asteroid colliding with the Earth was as high as one in 500.

Gravity Simulator image of the nominal (best-fit) orbit of near-Earth object 2011 AG5 passing the Earth-moon system in February 2040. Earth is the blue dot, the moon’s orbit is gray, and 2011AG5 is green. Simulation created with JPL Horizons data (uncertainty parameter U=4″) by Tony Dunn. Image via Wikimedia Commons.

Astronomers agreed that – if this object were to collide with the Earth – it would release about 100 megatons of energy, several thousand times more powerful than the atomic bombs that ended World-War II. Statistically, they say, a body of this size should impact the Earth on average every 10,000 years.

Why was there uncertainty about whether this asteroid would collide with us in 2040? As so many of you point out when we post stories about asteroids passing near Earth, the gravity of our Earth and moon affects these objects. Formerly, astronomers were saying that if 2011 AG5 passed us at just the right distance in 2023, it would swing back again and impact the Earth in 2040. At the time, we didn’t know 2011 AG5’s orbit well enough to say if this would happen. Now the object’s orbit has been studied more thoroughly by the Hawaii astronomers. The new observations were made on October 20, 21, and 27, 2012. They’ve now analyzed the asteroid’s orbit sufficiently that they feel confident in giving the asteroid the all-clear.

Read more from Gemini Observatory about how astronomers learned that 2011 AG5 is no threat to Earth in 2040. 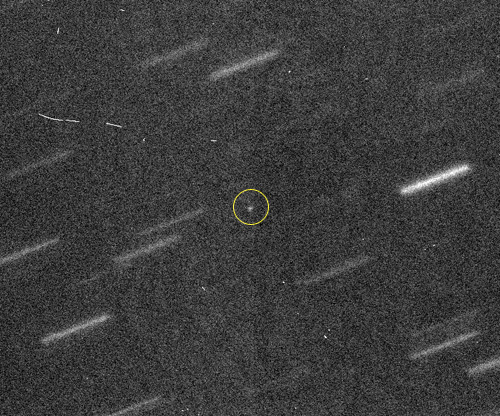 Gemini Multi-Object Spectrograph image of 2011 AG5, taken in late October 2012. The asteroid is the point at the center of the image (circled) with background stars trailing because the telescope tracked on 2011 AG5. The astronomers say that 2011 AG5 is highly variable in brightness. Long exposures are needed to make this faint object visible. Image via Gemini Observatory.

Why do we hear so much nowadays about asteroids passing near Earth? The fact is that astronomers are now actively looking for, and therefore finding, such objects. A telescopic survey of the sky called the Mt. Lemmon Survey – specifically designed to look for asteroids that pass near Earth – discovered 2011 AG5 in January of 2011. Observations of its orbit revealed that it goes around the sun once every 1.7 years. It travels out past the orbit of Mars and inside the orbit of Earth, and comes close to Earth every few orbits. In 2023, 2011 AG5 will pass about 1 million miles from us (1.6 million kilometers), or about four times the moon’s distance. But in 2040, it’ll come closer.

In March 2012, Bad Astronomer Phil Plait wrote a masterful explanation of why this object was considered a threat, and why astronomers did not agree on how actively to pursue further studies of the object. If you’re interested in more about this object, read Phil’s post here, but remember … further observations have enabled astronomers to say that threat from 2011 AG5 in 2040 is now zero.