ESA and ESO confirm asteroid will miss Earth in September

Asteroid 2006 QV89, a space rock that’ll pass closest to Earth on September 9, will not strike Earth. Details here, including a recent, fortunate non-detection of the asteroid by ESA and ESO. 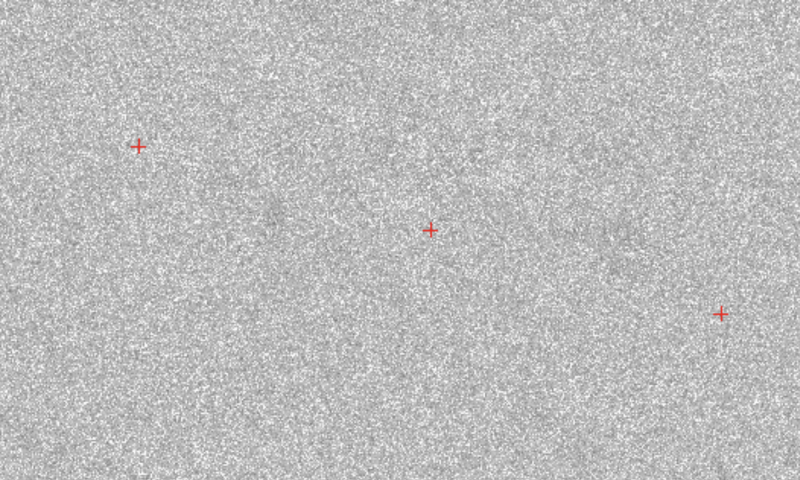 This VLT image shows the region of the sky where asteroid 2006 QV89 would have been seen, only if it were on a collision course with Earth in 2019. ESA said, “Even if the asteroid were smaller than expected, at only a few meters across, it would have been seen in the image. Any smaller than this and the VLT could not have spotted it, but it would also be considered harmless as anything this size would burn up in Earth’s atmosphere.” Read more about this image via ESA.

We’re still getting emails from people asking about asteroid 2006 QV89, a space rock that’ll pass closest to Earth on September 9, 2019. Since June, there’ve been numerous online articles (for example, here and here), some focusing on the minuscule chance this asteroid might strike Earth in September. We’re here to focus on the much, much, much greater chance this asteroid will not strike us. In fact, asteroid 2006 QV89 is currently classified by astronomers as NO HAZARD. It is not expected to hit Earth. In July, for example, in what astronomers said is “the first known case of ruling out an asteroid impact through a ‘non-detection’,” the European Space Agency (ESA) and the European Southern Observatory (ESO) concluded that this asteroid is not on a collision course with Earth in 2019 – and the chance of any future impact is also extremely remote. More about the ESA/ESO non-detection below.

Before we get into ESA and ESO’s non-detection and no-collision conclusion, though, let’s ask … what does NASA say? As of June 2019, calculations made by NASA/JPL with the available data suggest the space rock will not even have a particularly close approach to Earth in September 2019. According to NASA’s Center for Near Earth Object Studies, 2006 QV89 will likely pass so far from our planet that there is a 99.989 percent chance the space rock will miss the Earth in September 2019.

Why the uproar about asteroid 2006 QV89 in the first place? The reason stems in part from the fact that this asteroid does appear on a “risk objects list” from the ESA, as do many other objects. In the case of asteroid 2006 QV89, it’s important to note that the asteroid has a Torino Scale of 0, which indicates its no hazard status. You can note that for yourself on the chart below, from ESA. Like many asteroids, 2006 QV89 is on a “risk” list, but ESA currently classifies it as a non-priority risk. 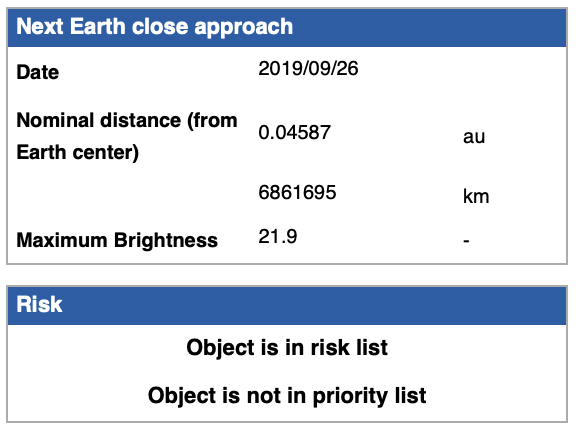 Many asteroids temporarily appear in a risk list due to uncertainties in their orbits. These sorts of uncertainties typically occur when an object has been recently discovered by observatories, and seen only during a few nights after the discovery, afterwards becaming too faint to observe. As an asteroid is re-observed – and astronomers’ asteroid-orbit modeling programs recognize it as an asteroid previously detected – the incoming new observations let astronomers better refine its orbit. The Catalina Sky Survey in Arizona discovered 2006 QV89 on August 29, 2006. At that time, it had a very short (10-day) observation arc. The Arecibo Observatory made radar observations of this asteroid on September 6, 2006. Then, as it sped on, it was lost from view again and has not been detected since 2006.

And that brings us to ESA and ESO’s recent non-detection of the asteroid. ESA said on July 16, 2019:

While we do not know 2006 QV89’s trajectory exactly, we do know where it would appear in the sky if it were on a collision course with our planet. Therefore, we can simply observe this small area of the sky to check that the asteroid is indeed, hopefully, not there.

This way, we have the chance to indirectly exclude any risk of an impact, even without actually seeing the asteroid.

This is precisely what ESA and the European Southern Observatory (ESO) did on July 4 and 5, 2019, as part of the ongoing collaboration between the two organizations to observe high-risk asteroids using ESO’s Very Large Telescope (VLT).

Teams obtained very ‘deep’ images of a small area in the sky, where the asteroid would have been located if it were on track to impact Earth in September. 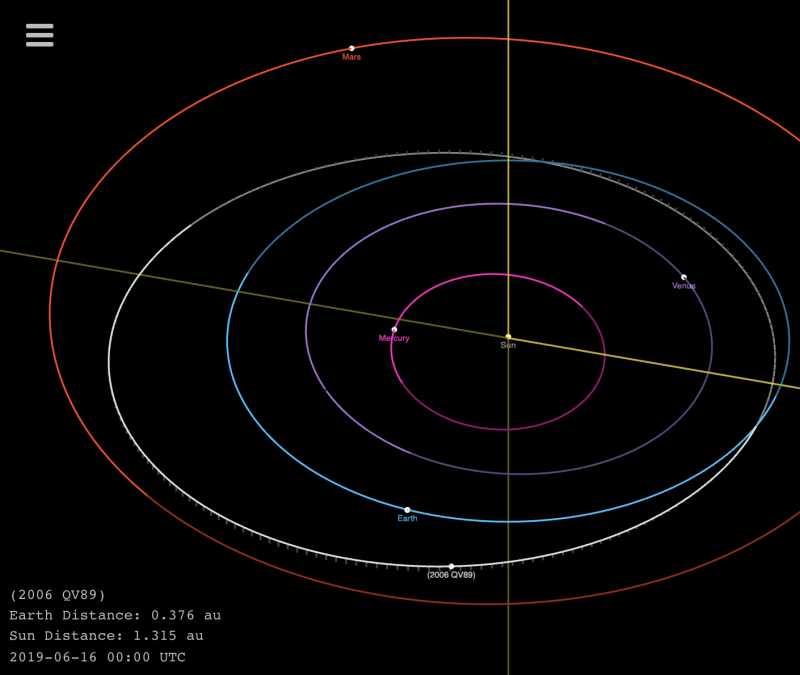 Viewed on this scale, from above the solar system, it looks as if the paths of Earth and asteroid 2006 QV89 intersect. Yet this asteroid’s pass on September 9, 2019, shouldn’t be a particularly close one. Image via NASA’s Center for Near Earth Object Studies.

From their brief observations of it – and from their knowledge of asteroids in general, which has grown dramatically in recent decades – astronomers can estimate that 2006 QV89 is about 98-131 feet (30-40 meters) in diameter, or about the length of an American football field. It’s classified as an Apollo type asteroid, which are Earth-crossing asteroids, of which some 20,000 are known as of January 2019.

Short summary for the panicking: Expected to miss and currently classified NO HAZARD. Tiny, most likely for an asteroid of that size is ‘Splosh in Pacific’. Likely many thousands of years before any such asteroid hits an urban area.

It is just a random asteroid, there are many in the table every year with dates that they ‘could’ hit, but they are classified as no hazard because they are all expected to miss. The press just picks up one of those many asteroids at random from time to time. Every year many asteroids are removed from the table that had dates of possible impacts that year. It is just one of numerous NO HAZARD asteroids currently in the table.

Some time in the next century or two then we can expect one of those many asteroids to hit, but if they are being tracked we would have at least 10 years warning to evacuate any city. The most likely thing is that the next asteroid to hit just sploshes harmlessly in the ocean. Hitting a city is extremely unlikely and most likely have to wait many thousands of years for that. An impact close enough to a city to warn residents to watch out for flying glass like Chelyabinsk is more likely and could happen, but not nearly as likely as a harmless splosh in the ocean.

This is an example of a ‘sensationalist press chose a random asteroid’ story. NASA didn’t warn us about it, and nor did ESA. It is expected to miss and is currrently classified as no hazard.

So how about seeing it as it passes? According to ESA, asteroid 2006 QV89 will show a maximum brightness or magnitude of +21.9 in September 2019, which means the space rock will appear extremely faint. It’ll be so faint that it will not even be visible with most telescopes, except for a few huge, observatory-type instruments. 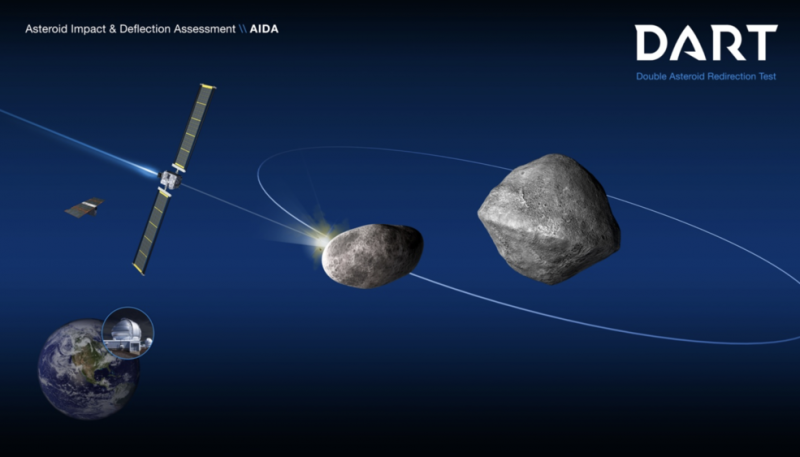 NASA plans to try to deflect a space rock from its path around September 2022. This schematic of the DART mission shows the impact on the moonlet of asteroid Didymos. Post-impact observations from Earth-based optical telescopes and planetary radar would, in turn, measure the change in the moonlet’s orbit about the parent body. Image via NASA/Johns Hopkins Applied Physics Lab.

Astronomers and other scientists are practicing with every close pass of an asteroid, in order to better prepare for a real scenario of any dangerous close approach on the future. What’s more, NASA is going to practice deflecting an asteroid from its path. The Double Asteroid Redirection Test (DART mission) is a planned space probe that will demonstrate the effects of crashing an impactor spacecraft into an asteroid moon for planetary defense purposes. It will launch in June 2021 and will try to impact a 525-foot (160-meter) moonlet in the binary asteroid Didymos. The intentional impact should occur sometime in September 2022. Read more about DART.

Eventually, it’s likely we will learn to deflect an incoming asteroid. Right now, though, if scientists were to detect an incoming asteroid, the best defense we have is to determine the impact area as precisely as possible, and then to evacuate the area. An excellent exercise occurred on November 13, 2015. A small object – which then was determined to be space debris – was detected with a trajectory that would intercept Earth. A team of scientists was able to determine it would enter Earth’s atmosphere over the ocean near Sri Lanka, and a “no fly”and “no fishing” zone was issued.

So there you have it. As we’ve said many times before, and as is still true, as of now, there’s no known dangerous asteroid that poses any imminent risk of Earth impact. Could an asteroid strike Earth? Of course. That’s why astronomers continue to be watchful.

Bottom line: Asteroid 2006 QV89 has been unfairly hyped as posing a threat to Earth in September 2019. In fact, it’s one of many asteroids on astronomers’ risk list, but it’s not classified as a priority risk. It’s classified as “no hazard.” In July, the European Space Agency and the European Southern Observatory concluded that this asteroid is not on a collision course this year – and the chance of any future impact is extremely remote.