As winter approaches, Titan’s south pole gets an ice cloud

The ice cloud above Titan’s south pole can be seen only at infrared wavelengths. It means autumn is here, and winter is coming, for Titan’s southern hemisphere.

Seasonal change on Saturn’s large moon, Titan, is creating new cloud patterns at Titan’s south pole. The image just below shows the south pole of Titan in natural color. Look toward the bottom of the image, for a vortex. NASA reported on this vortex over Titan’s pole in July 2012 and said then it was a sign that autumn and ultimately winter were on their way to Titan’s southern hemisphere. Then yesterday (April 11, 2013), NASA said that an ice cloud, detectable only at infrared wavelengths, also has formed over Titan’s south pole. 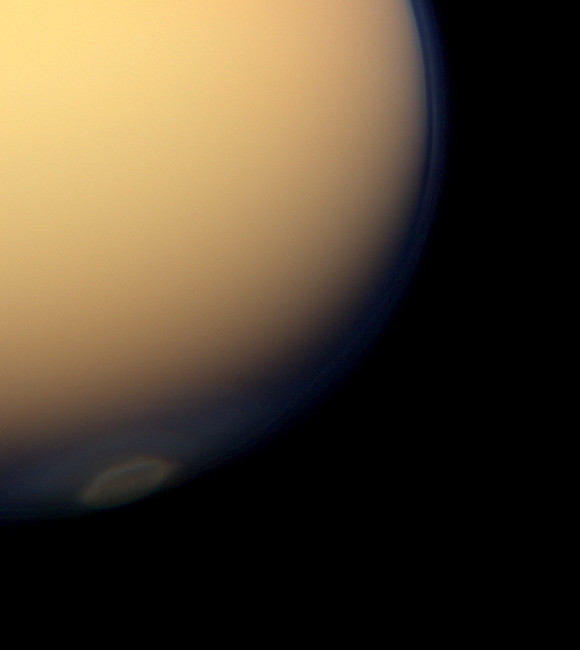 This image a combination of red, green and blue images taken by the wide-angle camera on NASA’s Cassini spacecraft. It shows the vortex in Titan’s southern hemisphere. Recently, an ice cloud (visible only via infrared) has also formed over this pole. Image via NASA 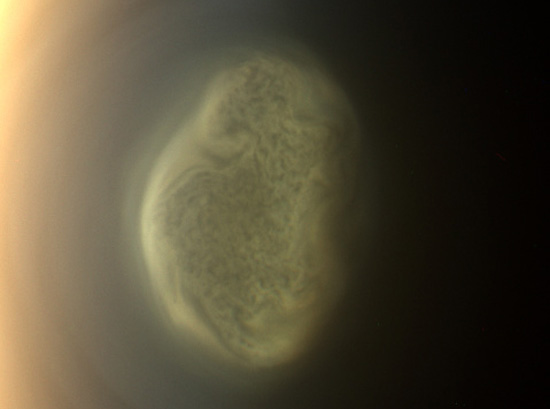 A closer look at Titan’s south pole vortex. The vortex is a sign of winter ahead for Titan’s southern hemisphere, and so is the recently discovered ice cloud.

Titan’s north pole also has an ice cloud, according to observations made since at least 2006 by NASA’s Cassini spacecraft (it has been orbiting Saturn, moving among Saturn’s moon since 2004). No one knows yet what sort of ice is in the cloud, whether it might be water, or perhaps more likely frozen methane. The northern ice cloud is now fading, NASA says. Since the northern ice cloud was seen during northern hemisphere winter on Titan, it’s logical to assume it’s a wintertime phenomenon. Now the seasons on Titan are changing, and winter is coming to the opposite part of Titan’s globe. It’s no surprise, then, that NASA is now seeing signs of a southern ice cloud.

The ice cloud taking shape over Titan’s south pole is setting off what NASA called “a cascade of radical changes in the atmosphere of Saturn’s largest moon.” It’s evidence that an important pattern of global air circulation on Titan has reversed direction. Donald E. Jennings, of NASA’s Goddard Space Flight Center in Greenbelt, Maryland and lead author of the recent study of Titan’s southern ice cloud, said:

We associate this particular kind of ice cloud with winter weather on Titan, and this is the first time we have detected it anywhere but the north pole. 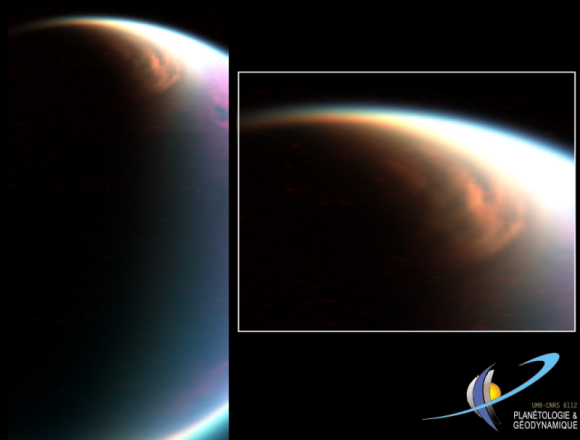 Until recently, only Titan’s north pole was known to have an ice cloud. It was winter in the northern hemisphere of Titan when the Cassini spacecraft first observed the ice cloud. This image – acquired in December 2006 – shows the north pole of Titan at infrared wavelengths. The presence of an ice cloud there had been predicted by Global Circulation Models of Titan’s atmosphere. Now Titan’s south pole is showing signs of having an ice cloud, as winter there approaches. Image via Laboratoire de Planétologie et Géodynamique de Nantes.

Bottom line: Since Cassini first began orbiting in and among Saturn’s rings and moon in 2004, it has been winter in the northern hemisphere of Titan, Saturn’s largest moon. One sign of that northern winter was an ice cloud above Titan’s north pole. Now an ice cloud is forming above Titan’s south pole, as the seasons shift toward winter on that part of Titan’s globe.