Asteroid discoverer Aryan Mishra wants to open teens’ eyes to the beautiful and amazing possibilities that cosmos has in store. 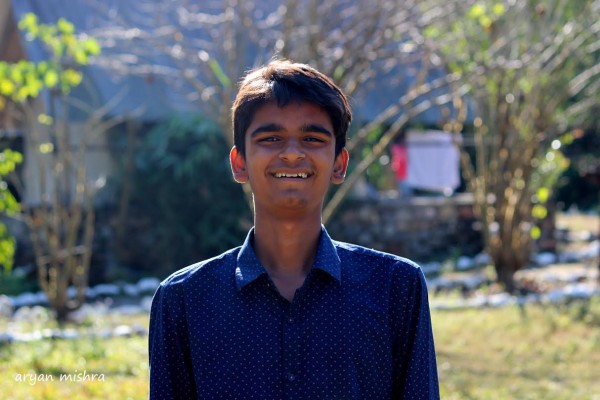 Aryan Mishra is a 15-year-old student in Delhi, India, who has a passion for astronomy. In 2014, he and Keerti Vardhan, another student, discovered a near-Earth asteroid during a nationwide asteroid search campaign. The search was conducted globally by the International Astronomical Search Collaboration (IASC) and in India by SPACE, which works towards popularization of science and astronomy in India and provides training to students and amateur astronomers for asteroid hunting. Now Aryan has more to say to teens around the world about the beauty and joys of astronomy.

Hello, my name is Aryan Mishra, I’m a 15-year-old high school student in Chinmaya Vidyalaya, Delhi, India. I started my journey of astronomy when I was 11 years old when, for the first time, I saw the rings of Saturn through a telescope. I decided … yes! I should go for astronomy.

In the hustle and bustle of school life, I see my friends are playing and having
fun, but I gave up many things and started learning astronomy. At the age of 11, I watched the sky every night. Soon, I got a planisphere which helped me a lot to explore the sky. At first, my parents did not support this interest, and my relatives discouraged me. But soon parents saw my real deep passion towards astronomy, and, in 2013, they decided to give me a small telescope. I started looking at the sky with that, and, from that telescope, for the first time I saw our own moon closely, and after that the planets in our solar system. 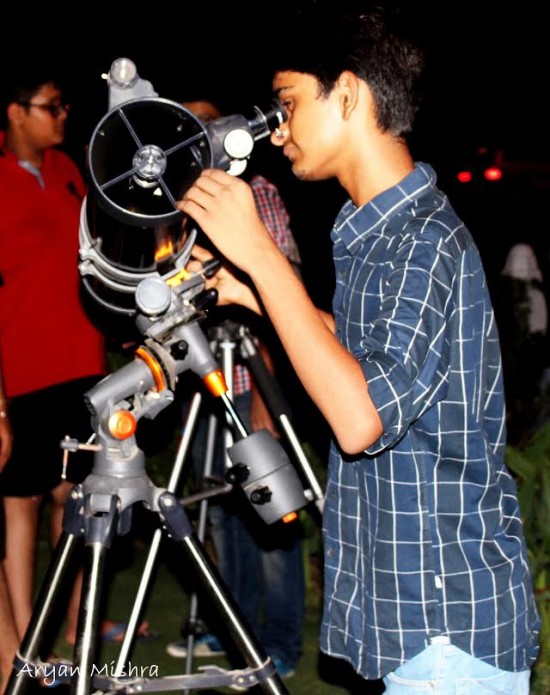 Aryan Mishra at the telescope.

I spent nights and nights in searching the keys of the Cosmos. My classmates frequently asked me about outer space, or what was the brighter star in the sky the night before? This inspired me to put on astronomy demonstrations for both junior high and high school students at my school. The kids were completely mesmerized, and their young eyes opened wide at the beautiful and amazing possibilities that the cosmos had in store.

They were hooked, and wanted more. Soon, I put on many lectures at schools all around that included video from world-renowned astrophotographers and expert astronomers. I also use social media like Facebook and in that way was able to educate young student across the globe.

In 2014 in the month of July, Keerti Vardhan and I were nominated from my school for a nationwide campaign for searching asteroids known as All India Asteroid Search Campaign. Students chosen for the program get to access images of the sky taken by 0.6-meter (24-inch) and 0.9-meter (34-inch) telescopes at the Astronomical Research Institute (ARI) Observatory in the U.S. Students search for asteroids after downloading and analyzing data with specialized software. According to an article at dnaindia.com in 2014:

There are about 75 teams registered from around the country. Once the program starts, the IASC [which organizes the competition globally] releases real-time data of space from which the students make their observations through a software, and send daily reports to the IASC.

Keerti Vardhan and I successfully discovered an asteroid, which is currently designated as 2014 00372. The discovery is now waiting to be placed in the world’s official minor body catalogue maintained by the International Astronomical Union in Paris.

My aim is to inspire millions of kids all around the world to look up. Really, the sky has no limit.

You can go up and up. 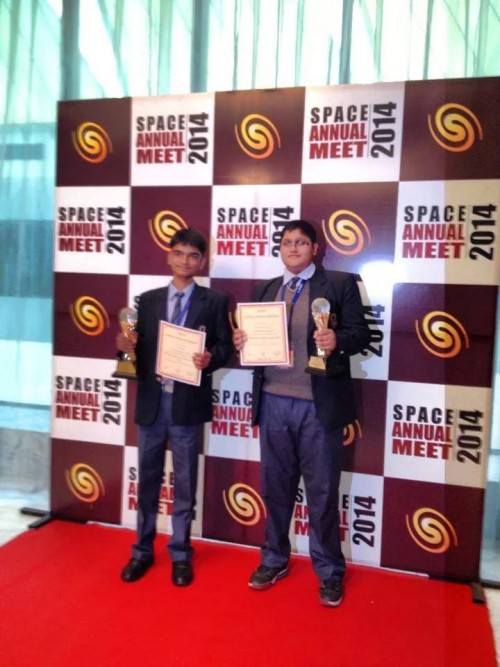 Bottom line: In 2014, Aryan Mishra and Keerti Vardhan discovered an asteroid – currently designed 2014 00372. Their discovery was part of the International Astronomical Search Collaboration (IASC), organized in India by SPACE, which works towards popularization of science and astronomy in India and provides training to students and amateur astronomers for asteroid hunting. All observations contribute to the Near Earth Object (NEO) data compiled by NASA and Jet Propulsion Lab (JPL). The project has provided opportunities to more than 500 students and amateurs in India to discover asteroids and near-Earth objects.