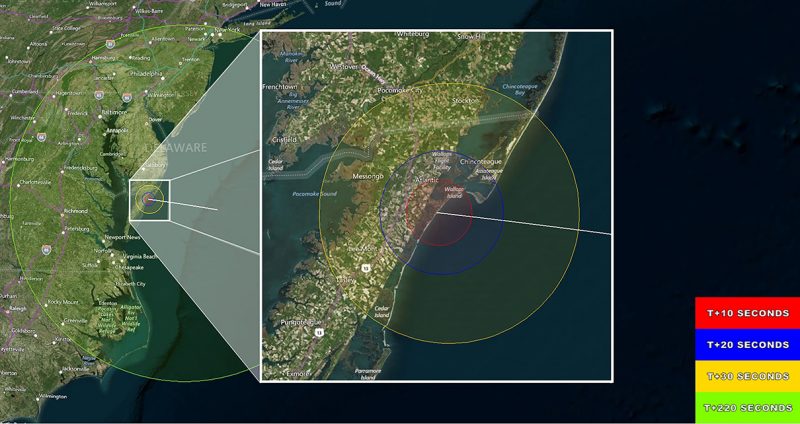 This map shows the projected visibility of the vapor tracers during the rocket launch, now scheduled for the predawn hours on June 29. The vapor tracers may be visible from New York to North Carolina and westward to Charlottesville, Virginia. Image via NASA.

NASA said on June 27, 2017 that the launch of its Terrier-Improved Malemute sounding rocket is scheduled for between 4:25 and 4:48 a.m. EDT (between 8:25 and 8:48 UTC; translate to your time zone) this Thursday, June 29. It said the launch window is determined by sun angles and the location of the moon. The rocket is to test a new multi-canister ejection system for deploying vapors in rocket missions for studying Earth’s upper atmosphere and ionosphere, aka aurora soundings. Upon launch of the rocket, the vapors will form luminescent, blue-green and red, artificial clouds expected to be seen from New York to North Carolina. 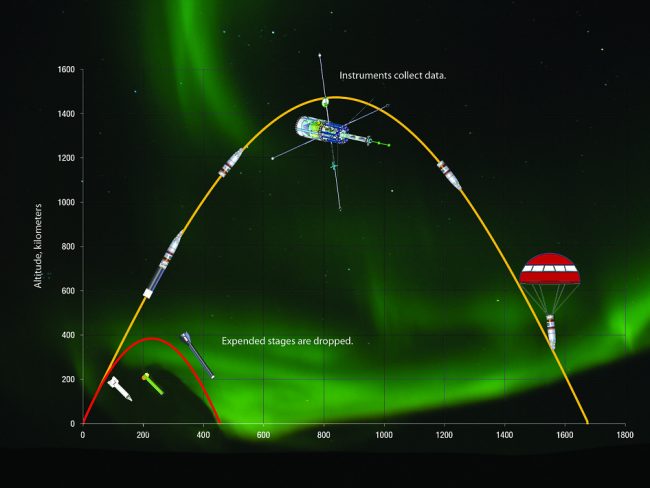 Illustration showing the trajectory of a sounding rocket. It’s a standard sounding rocket technique to create visible trails and “clouds” through the release of vapors that either glow on their own (i.e., luminescence) or scatter sunlight. Scientists monitor and take pictures of the subsequent trails and clouds to learn how the upper atmosphere and/or the ionosphere moves and evolves. Image via NASA.

The launch was originally scheduled for early June and has been postponed several times. NASA explained:

These clouds, or vapor tracers, allow scientists on the ground to visually track particle motions in space.

The vapor tracers are formed through the interaction of barium, strontium and cupric-oxide. The tracers will be released at altitudes 96 to 124 miles high and pose no hazard to residents along the mid-Atlantic coast.