This pair of barred spiral galaxies have just begun a magnificent merger. 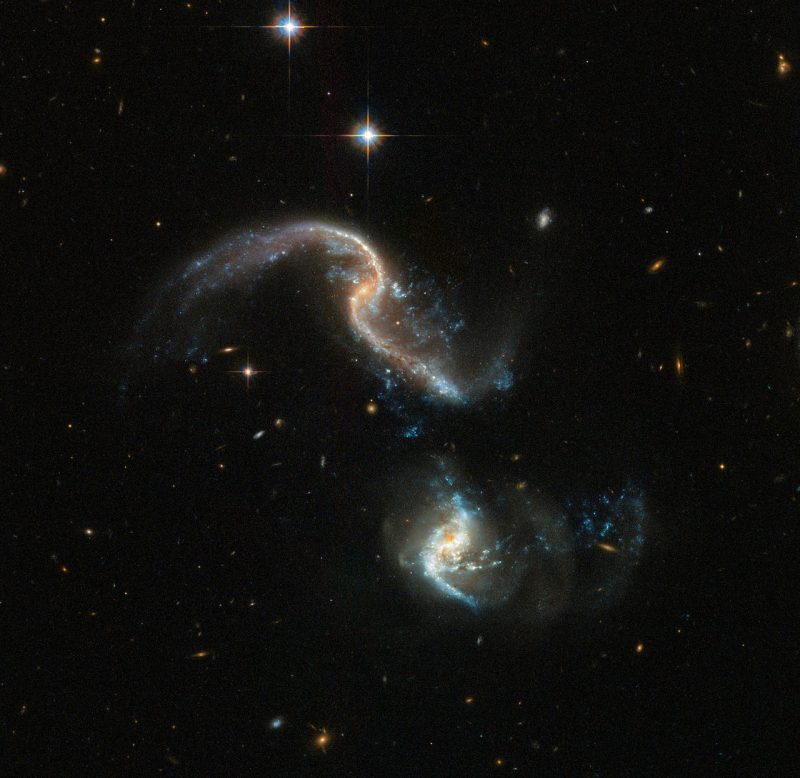 This system of 2 spiral galaxies – located some about 350 million light-years away – is called Arp 256. The galaxies are colliding, as evidence by their distorted shapes and the many young blue stars in their spiral arms, whose birth was triggered by the galaxies’ close interaction. Image via Hubble Space Telescope.

Astronomers use the term peculiar galaxy to describe any galaxy that appears unusual in shape, size or composition. It’s often a merger between galaxies that causes them to look peculiar, as in the case with this pair of barred spirals – called Arp 256 – which are known to be moving toward each other and already interacting. These two are located in our sky in the direction of the constellation of Cetus the Whale. The Hubble Space Telescope captured this image of them; its website explained:

This image suspends them in a single moment, freezing the chaotic spray of gas, dust and stars kicked up by the gravitational forces pulling the two galaxies together.

Though their nuclei are still separated by a large distance, the shapes of the galaxies in Arp 256 are impressively distorted. The galaxy in the upper part of the image contains very pronounced tidal tails — long, extended ribbons of gas, dust and stars.

The galaxies are ablaze with dazzling regions of star formation: the bright blue fireworks are stellar nurseries, churning out hot infant stars. These vigorous bursts of new life are triggered by the massive gravitational interactions, which stir up interstellar gas and dust out of which stars are born.

Astronomer Halton Arp was the first to catalog Arp 256 in his Atlas of Peculiar Galaxies, published by CalTech in 1966. Many of the galaxies in this catalog are known to be interacting.

It’s thought that the two galaxies of Arp 256 will eventually merge.

Bottom line: This Hubble Space Telescope image shows Arp 256, consisting of two galaxies, both barred spirals, distorted into weird shapes by their interaction with each other.