Strange radio signals from nearby star

A 10-minute observation in May of nearby star Ross 128 yielded a peculiar radio signal. Further observations planned for Sunday night. 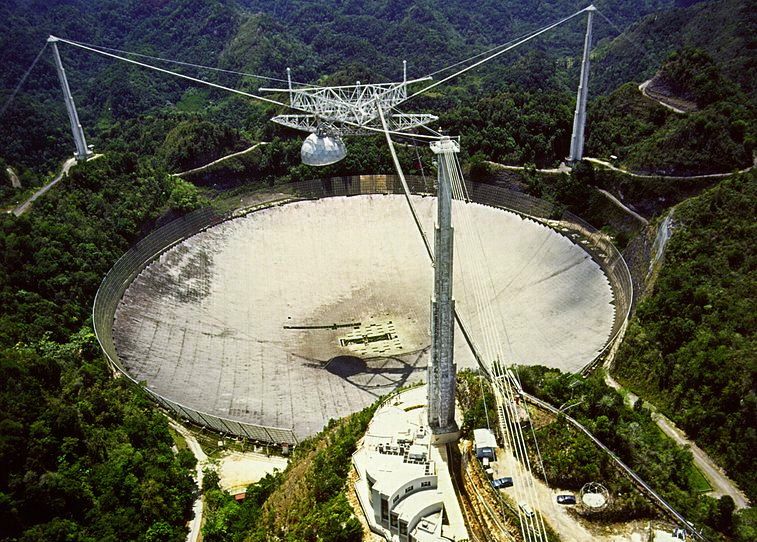 Aerial view of Arecibo Observatory in Puerto Rico, which in May detected a peculiar radio signals from the nearby dwarf star Ross 128. This telescope, by the way, was used to send a radio signal – carrying information about Earth and its humans – in 1974. Image via Wikimedia Commons.

We are waiting for all results to reach a conclusion on the nature of the signals from #Ross128 later this week. Spoilers: not aliens. ????

Astrobiologist Abel Méndez at Arecibo radio telescope issued an interesting statement today (July 14, 2017) about a 10-minute observation, in May, of the red dwarf star Ross 128. This is one of the nearest stars to Earth at only 10.89 light-years away. It seems the star apparently emitted “some very peculiar signals.” Either that, or the signal is terrestrial in origin (perhaps from an earthly satellite), or it was from some object in the field of view of this star. Méndez isn’t saying it’s an alien intelligence. But he did say:

… the recurrent aliens hypothesis is at the bottom of many other better explanations.

Here’s what he said:

Two weeks after these observations, we realized that there were some very peculiar signals in the 10-minute dynamic spectrum that we obtained from Ross 128 (GJ 447), observed May 12 at 8:53 PM AST (2017/05/13 00:53:55 UTC). The signals consisted of broadband quasi-periodic non-polarized pulses with very strong dispersion-like features. We believe that the signals are not local radio frequency interferences (RFI) since they are unique to Ross 128 and observations of other stars immediately before and after did not show anything similar.

We do not know the origin of these signals but there are three main possible explanations: they could be (1) emissions from Ross 128 similar to Type II solar flares, (2) emissions from another object in the field of view of Ross 128, or just (3) burst from a high orbit satellite since low orbit satellites are quick to move out of the field of view. The signals are probably too dim for other radio telescopes in the world and FAST is currently under calibration.

Each of the possible explanations has their own problems. For example, Type II solar flares occur at much lower frequencies and the dispersion suggests a much farther source or a dense electron field (e.g. the stellar atmosphere?). Also, there are so many nearby objects in the field of view of Ross 128 and we have never seen satellites emit bursts like that, which were common in our other star observations. In case you are wondering, the recurrent aliens hypothesis is at the bottom of many other better explanations.

Therefore, we have a mystery here and the three main explanations are as good as any at this moment. Fortunately, we obtained more time to observe Ross 128 next Sunday, July 16, and we might clarify soon the nature of its radio emissions, but there are no guarantees.

We will also observe Barnard’s Star that day to collaborate with the Red Dots project. Results from our observations will be presented later that week.

I have a Piña Colada ready to celebrate if the signals result to be astronomical in nature.

Good luck, Abel and Arecibo! We’ll be watching for any possible results. 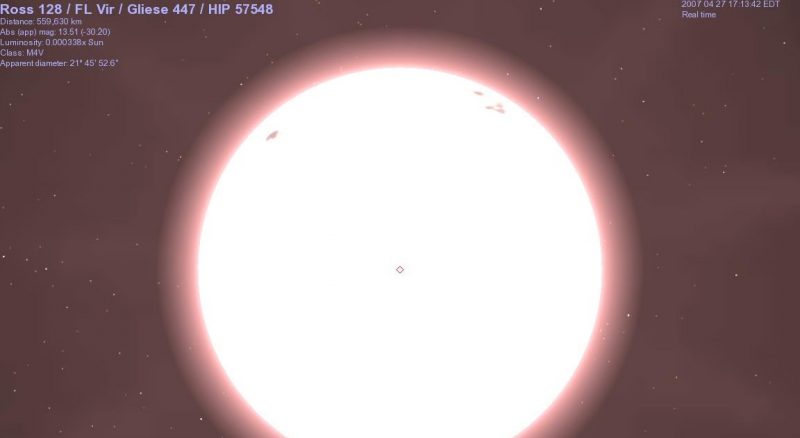 Here’s an image (looks like an artist’s concept, or maybe part of a game?) of Ross 128, and a little info about it, from Our Stellar Neighborhood.

Bottom line: Astronomers at Arecibo Observatory observed a peculiar radio signal from the nearby star Ross 128. They aren’t saying “aliens,” but the natural explanations have weaknesses. They’ll be observing the star again on Sunday, July 16, 2017.