Are you ready for the Lyrid meteor shower?

Tips from an EarthSky community member on how to find a good location for the Lyrid meteor shower – and useful things to take with you if you decide to go out.

By Sergio Garcia Rill of sgarciarill.com

The 2013 Lyrid meteor shower is already underway, and while it’s not predicted to be the most spectacular display of the year, it can be a good chance to go out and stargaze for a while.

The Lyrid meteor shower is expected to be active from April 16 to April 25, with an expected peak day of April 22. Unfortunately, this year there will be a waxing-gibbous moon (should be around 80% iluminated the night of the peak) which means there would only be a little more than an hour before sunrise with completely dark skies, and adding insult to injury, this would happen on the early hours of Monday, April 22.

All of that means only bad news for folks like me that need to drive at least 4 hours to escape the light pollution of the city trying to find a decent dark sky to watch (and possibly photograph) the meteor shower.

Now, before I even get into some tips of how to find a good location for the Lyrids meteor shower and some useful things you might want to take with you in case you decide to go out, I should warn you: At their peak, the Lyrids are expected to have only about 10 to 20 meteors an hour. If you do the math, that is possibly less than 1 meteor every 3 minutes. I’ve been to a couple of star parties made for meteor showers, and I’ve overheard people talking, expecting huge bright meteors falling every other second and being disappointed after 10 minutes of looking at the sky; the problem was their expectations were wrong. 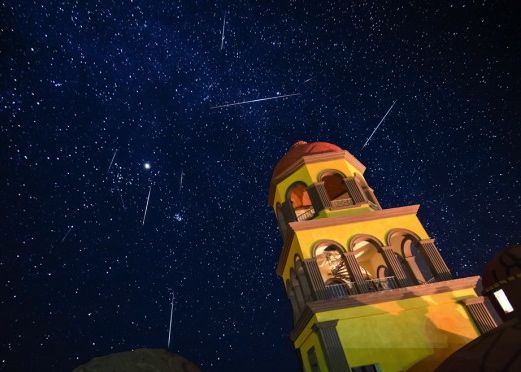 By Sergio Garcia Rill of sgarciarill.com

A meteor shower is very hard to predict. There could be a few bright meteors or a lot, there might be plenty of small ones you might miss, there could be a period where 10 meteors fall in a matter of minutes, but there could be periods of almost hours where you won’t see anything. The point is, you should plan on being patient and just try to enjoy the night sky; this time of the year the Milky Way rises in the early morning on the east sky, so you might want to look that way once the moon has set.

That being said, you might want to give it a try but don’t know where to go. Well, in planning my night photoshoots I use a variety of apps and web pages to know how dark the sky is in a certain location, the weather forecast, and how the night sky will look. Here’s the link to Dark Sky Finder. It’s a website that shows the light pollution in and around cities in North America which has been fundamental for finding dark sites to setup shots. Dark Sky finder also has an app for iPhone and iPad which as of this writting is only 99 cents so you might want to look into that as well. For people not in North America, the Blue Marble Navigator might be able to help to see how bright are the lights near you.

The other tool I can suggest is the Clear Sky Chart. I’ve learned the hard way that, now matter how perfectly dark the sky is at your location, it won’t matter if there’s a layer of clouds between you an the stars. This page is a little hard to read, but it shows a time chart, with each column being an hour, and each row being one of the conditions like cloud coverage and darkness. Alternatively, you could try to see the regular weather forecast at the weather channel or your favorite weather app.

A final tip is to remember this might be a long process that will require patience. If you do decide to go out for the Lyrid meteor shower this year, try to find a place were you can be confortable and looking up at the sky, take some coffee and some snacks; depending on the local weather, bundle up in layers accordingly, and get comfortable, it will take your eyes a few minutes to adjust to the night sky so I wouldn’t suggest keeping any lights on nearby. Or, if you must, consider getting a red light flashlight. It will help you find your way in the darkness but it won’t affect your eyes so much. Also, keep in mind mosquitoes might be more active during that time so you should consider taking some insect repellant.

As for me, I’m still on the fence deciding if I’ll have enough time to venture out to take some photos, but if I do I will post them here and on Facebook so stay alert.

Sergio Garcia Rill is an amateur astronomer and photographer in Houston, Texas and an honored member of the EarthSky photo community on Google+. Thanks for the post, Sergio!