After an explosion damaged their spacecraft, the Apollo 13 astronauts – on their way to the moon – were in dire peril. Read about the human ingenuity that led the Apollo 13 mission to a safe and successful conclusion. 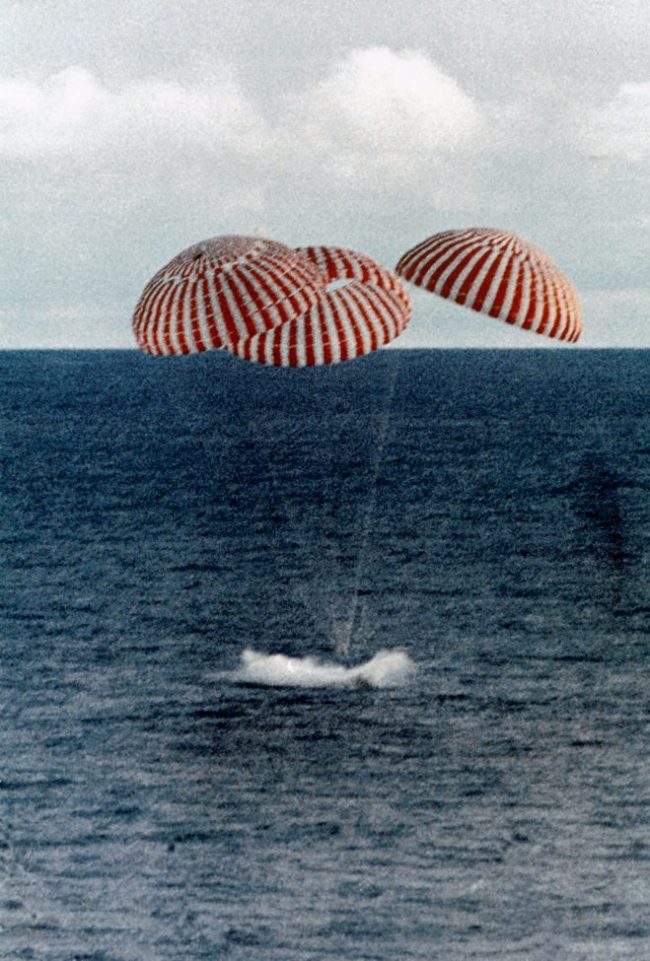 The Apollo 13 mission – with 3 astronauts aboard – safely splashed down in the Pacific Ocean on April 17, 1970, after 4 perilous days in space in a damaged spacecraft. Image via NASA.

“Houston, we’ve had a problem …” Fifty years ago today – on April 17, 1970 – the ill-fated Apollo 13 mission returned to Earth safely, after a missed moon landing and near-disaster for the three astronauts aboard. An oxygen tank had exploded in the spacecraft four days earlier on April 13, causing the second oxygen tank to fail as well and depriving astronauts James Lovell, John Swigert and Fred Haise of most of their air reserves, water supply, light and power.

Apollo 13 would have landed a lunar module (called a LM, pronounced “lem”) on the moon’s surface, while the command module orbited above. The landing was planned for the Fra Mauro Highlands, later visited by Apollo 14. The goal had been to investigate terrain shaped by the giant Imbrium impact billions of years ago.

But it wasn’t to be. Keep reading to learn more about the perilous journey of Apollo 13 – a brush with death for the three astronauts on board – and the human ingenuity that led the mission to a safe and successful conclusion. 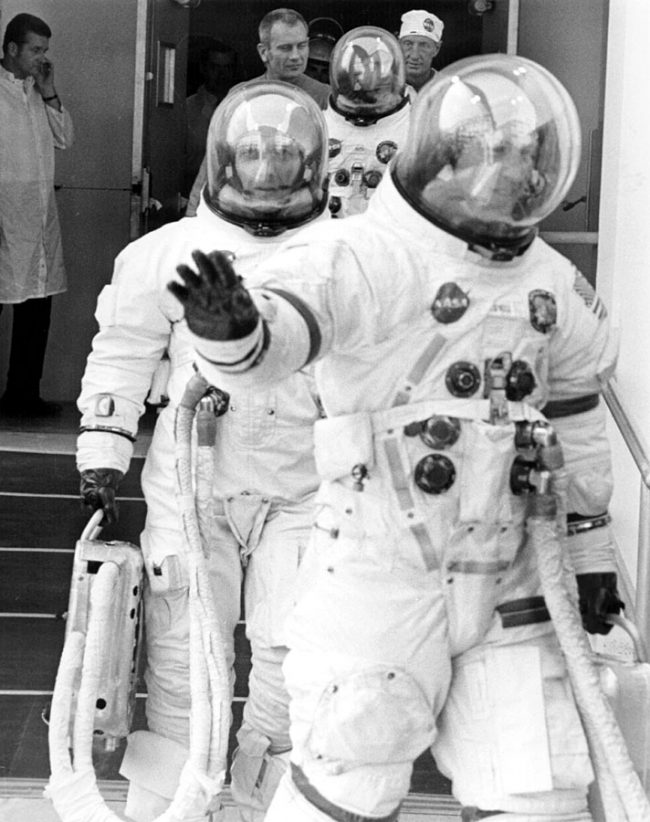 The 3 Apollo 13 astronauts – John Swigert, Fred Haise and James Lovell – on their way to their spacecraft before launch. Image via NASA. 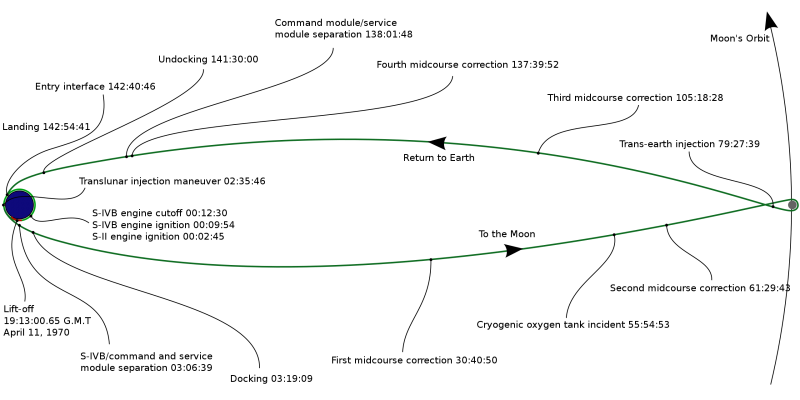 View larger. | Timeline of events during the Apollo 13 mission, based on Apollo 13 Mission Report. The oxygen tank explosion is labeled “cryogenic oxygen tank incident.” You can see that it occurs more than halfway to the moon. Image via Andrew Buck/ Wikimedia Commons.

Besides destroying both oxygen tanks and disabling two of the three fuel cells, the explosion ripped sections off the casing of the service module.

Swigert, Haise, Lovell and the NASA personnel at the Manned Space Center in Houston, Texas (now Johnson Space Center) determined that the astronauts’ only chance of returning to Earth required falling back on the LM’s life support system. All three men left the command module and moved into the lunar module, which was named Aquarius. The lunar module or LM had become their “lifeboat” in space.

To save power, the heat in the module was turned down to a minimum. 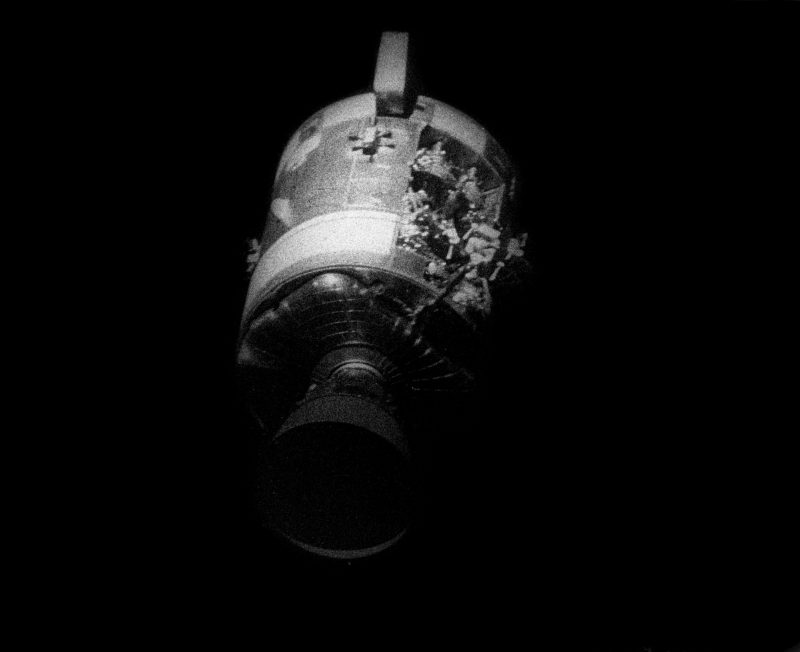 Apollo 13’s damaged service module seen after being jettisoned from the spacecraft. Image via NASA.

Besides being cold and having their food and water rationed, the astronauts faced another problem in the crowded module. From a NASA document:

… the atmosphere in the lunar module was gradually accumulating carbon dioxide as the absorbers in the environmental control system became saturated. Members of MSC’s Crew Systems Division devised a makeshift air purifier by taping a plastic bag around one end of a CM lithium hydroxide cartridge and attaching a hose from the portable life-support system, allowing air from the cabin to be circulated through it.

After verifying that this jury rig would function, they prepared detailed instructions for building it from materials available in the spacecraft and read them up to the crew.

For the rest of the mission the improvised system kept the CO2 content of the atmosphere well below hazardous levels. 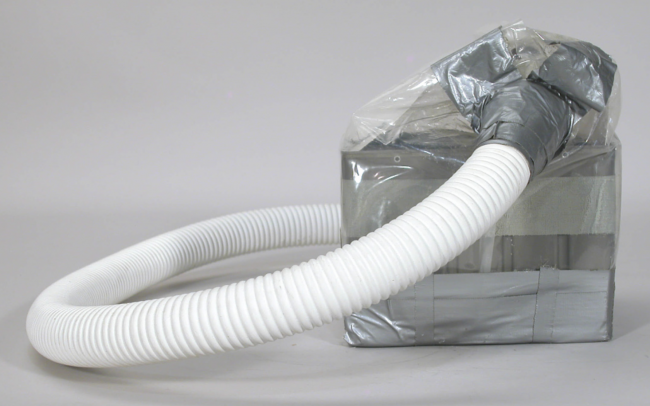 A mock-up of the jury-rigged lithium hydroxide canister – devised by ground crew using materials on hand in the Apollo 13 lunar module – used to save the astronauts in the Apollo 13 emergency. Image via AirandSpace. 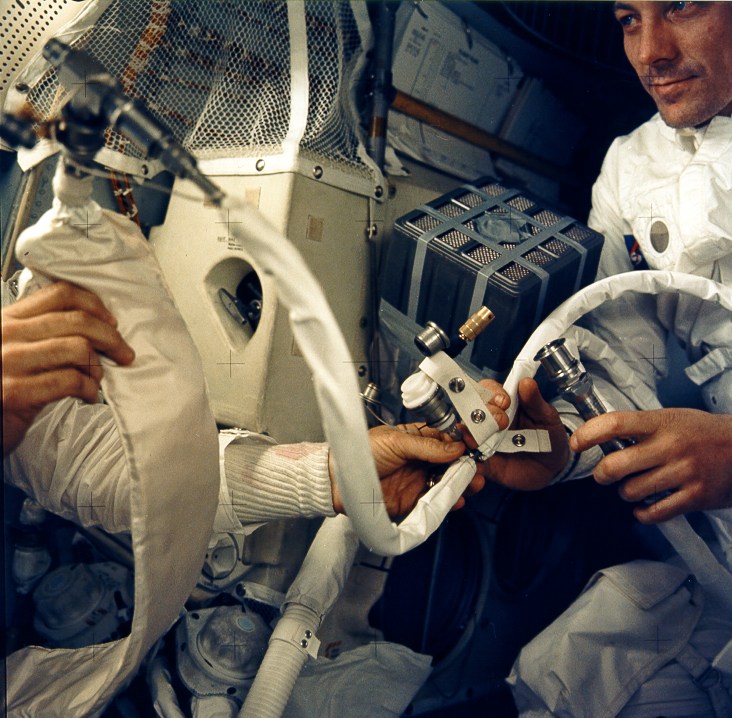 This photograph shows the temporary apparatus necessary when the 3 astronauts moved from the command module to the LM. Astronaut John L. Swigert Jr.,is on the right. On the left, one of the other astronauts holds in his right hand a feed water bag. It is connected to a hose (in center) from the Lunar Topographic (Hycon) camera. In the background is the “mail box,” a jury-rigged arrangement which the Apollo 13 astronauts built to use the command module lithium hydroxide canisters to purge carbon dioxide from the LM. Image via NASA.

The LM – which had been meant to land on the moon – had been designed with only two days of life support for two astronauts. After four days of carrying three astronauts through space, water and power in the LM were running low. Fortunately, the voyage was nearly over. Attitude adjustments ensured that the space capsule would enter the atmosphere at the right angle, neither too shallow nor too steep.

And so the capsule approached the Earth at nearly 5 miles (8 km) per second.

Four hours before landing, the crew jettisoned the service module, for the first time getting photographs of the damage. Three hours later, the crew left the LM, which was also jettisoned. After an uneventful reentry, they splashed down in the Pacific near the recovery vessels and were safely picked up.

The world gave a sigh of relief. 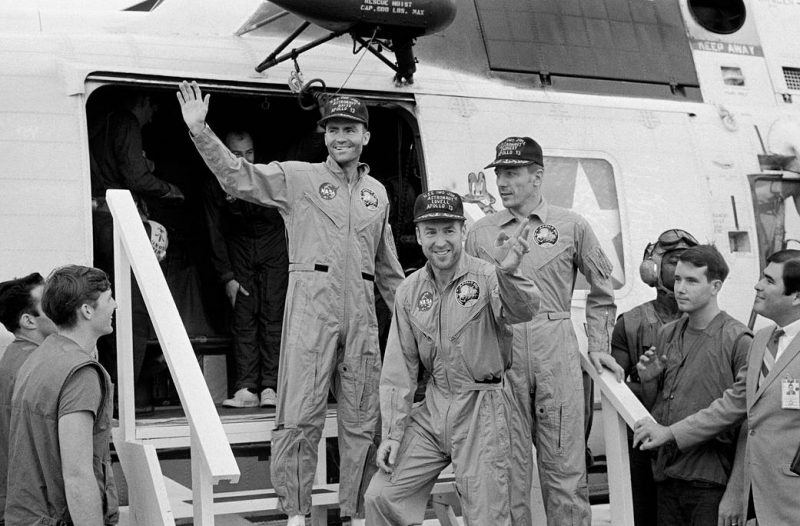 Bottom line: On this day 50 years ago – April 17, 1970 – the ill-fated moon mission Apollo 13 returned safely to Earth with all three astronauts aboard.