The March 6-7, 2012 was an X5-class eruption. It was the second major solar flare in a week. Its effects are now headed for Earth.

The sun is definitely in an active phase! And early March 2012 has been one of the most active times yet. Sunspot AR1429 released another major solar flare last night on March 7 at 00:28 UTC, or March 6 at 6:28 p.m. CST in the U.S. This was an X5-class eruption – the fourth major eruption from the sun seen since late January 2012 – and it did produce a coronal mass ejection (CME), which is headed for Earth.

Illustrated guide to Venus and Jupiter conjunction in March 2012

This is the forecast track for the solar flare effects now heading toward Earth. Don’t get confused by this animation. Just look at the round image on the far left. See the yellow dot? That’s Earth. See the white dot in the middle? That’s the sun. See how the animated coronal mass ejection leaves the sun and strikes Earth? That’s what’s predicted to happen during the night of March 7, according to U.S. clocks. This animated forecast track was prepared by space weather experts at NASA Goddard’s Space Weather Lab.

AP is reporting this solar flare as the largest in five years. Their story about it emphasizes that the solar flare effects have the potential to cause disruptions to various earthly technologies, specifically power grids, GPS and airplane flights. NASA held a press conference yesterday (March 6, 2012) in which space weather experts discussed the fact that the sun is now active. EarthSky has noticed via comments on its Facebook page, indicating that many don’t trust federal agencies’ downplaying of solar flare effects. The basic feeling seems to be expressed in a series of articles in June 2011 in the Washington Post, by Steve Tracton:

…. the United States, Europe, and other technologically advanced societies are currently not prepared to significantly mitigate the effects of, or effectively recover from, the potentially drastic consequences of a “big one.”

Personally, I’m not sure what to make of it. Fear of solar storm would never have occurred to me. True there was a power outage in Quebec in 1989, caused by a solar storm. So it can definitely happen. In the case of Quebec in 1989, the power failure lasted nine hours. Afterwards, the power company implemented mitigation strategies, which were adopted by other power companies elsewhere.

Those who believe there is a reason to be afraid often point to the most powerful solar storm in recorded history, which occurred in 1859. It’s known as the Solar Superstorm, or the Carrington Event, and it caused fabulous aurorae visible at low latitudes. A storm of this magnitude would affect our technologies more, but so much that we are not prepared to effectively recover from it? Plus how often does such a storm occur? Every 150 years? Every 500 years? We really have no idea. I’ll have to research this subject more, but I’m not sure there are definitive answers.

Want to learn more about solar flares and their effects? See the video below.

The sun is now heading toward a solar maximum, predicted for early 2013 by space scientists.

Bottom line: The sun released a very powerful solar flare last night (March 6 at 6:28 p.m. CST in the U.S. or March 7 at 00:28 UT). Its effects are now heading toward Earth, due to arrive overnight on March 7, according to U.S. clocks. Geomagnetic storms caused by eruptions on the sun have the potential to disrupt power grids, satellites that operate global positioning systems and other devices, lead to some rerouting of flights over the polar regions. They also create beautiful auroras. Aurora alert! 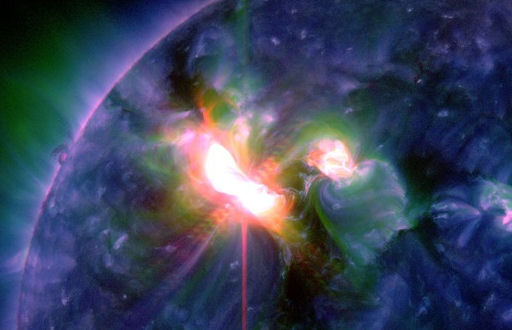