Watch for a possible continuation of the unexpected Andromedid meteor outburst tonight! The Geminid meteor shower is now rising to a peak, too.

Expert observers are reporting an unexpected outburst of a little-known (but historical) meteor shower. The Andromedid meteor outburst began yesterday (December 8, 2013) and might not have peaked yet. The Geminid meteor shower is going on now, too, peaking on the mornings of December 13 and 14. So tonight might be an awesome night to go outside and watch for meteors!

The source of last night’s outburst is Comet Biela, which produced a meteor storm in the year 1872. These meteors are called the Andromedids, and sky watchers began noticing an increase in their numbers two years ago. 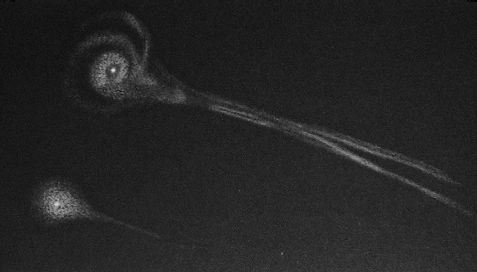 Meteor experts at NASA and at universities began noticing the 2013 Andromedid outburst yesterday. Peter Brown (University of Western Ontario) told skyandtelescope.com that the Canadian Meteor Orbit Radar had recorded the outburst and he added:

It is not clear if the peak of the outburst has been reached or if activity may continue to increase.

Watch for a possible continuation of the Andromedid meteor outburst tonight (the night of December 9-10, 2013. Just go to a dark location and look up! As usual, it’s likely you’ll see the most meteors when the moon is out of the sky. Find a custom sunrise-set calendar here, and click the moonrise-set boxes.

Bottom line: The Andromedid meteor shower began an outburst on December 8, and might continue on the night of December 9. Watch for the in a dark sky.

Everything you need to know: Geminid meteor shower in 2013