A space mission turned its X-ray vision on the Andromeda galaxy and spotted 40 X-ray binaries, exotic objects thought to play a role in our universe’s evolution. 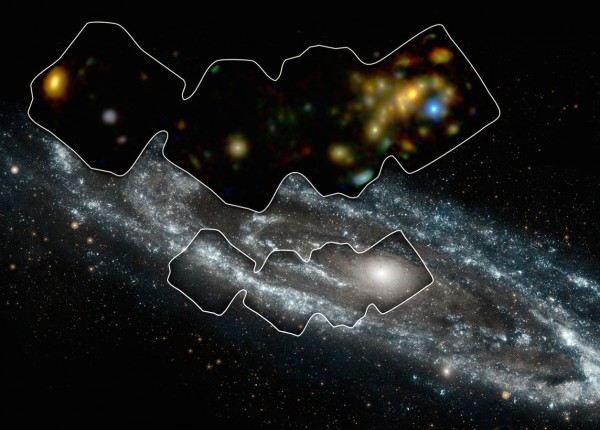 View larger and annotated. | The Andromeda galaxy, nearest spiral galaxy to our own Milky Way. NASA’s NuSTAR space observatory has captured an image of a portion of the galaxy in high-energy X-rays. Image via NASA/JPL-Caltech/GSFC.

Astronomers released this image this week (January 5, 2015), which shows some of the more exotic inhabitants of the galaxy next door, the Andromeda galaxy or M31. They released these results at the 227th meeting of American Astronomical Society, going on this week in Kissimmee, Florida. The image is from NASA’s Nuclear Spectroscopic Telescope Array (NuSTAR), and it shows a piece of the galaxy in the high-energy X-ray portion of the electromagnetic spectrum. NASA said NuSTAR has observed 40 X-ray binaries in this region, which are of interest to astronomers because they’re thought to play a critical role in the evolution of the universe.

X-ray binaries are objects seen to be highly luminous in X-rays, thought to be comprised of a black hole or neutron star that feeds off a stellar companion. They’re thought to have heated the intergalactic gas in which the first galaxies formed.

So they’re of interest to astronomers, but studying these objects in galaxies beyond our Milky Way isn’t easy. Daniel Wik of NASA Goddard Space Flight Center in Greenbelt, Maryland, who presented the results at this week’s meeting of astronomers, explained:

Andromeda is the only large spiral galaxy where we can see individual X-ray binaries and study them in detail in an environment like our own. We can then use this information to deduce what’s going on in more distant galaxies, which are harder to see.

The Andromeda galaxy is 2.5 million light-years away. That seems very far, but this galaxy is the only large spiral we can see easily with the unaided eye on a dark night, in a country sky.

The astronomers said in a statement:

In X-ray binaries, one member is always a dead star or remnant formed from the explosion of what was once a star much more massive than the sun. Depending on the mass and other properties of the original giant star, the explosion may produce either a black hole or neutron star.

Under the right circumstances, material from the companion star can spill over its outermost edges and then be caught by the gravity of the black hole or neutron star.

As the material falls in, it is heated to blazingly high temperatures, releasing a huge amount of X-rays.

They said that – with NuSTAR’s new view of a swath of Andromeda – Daniel Wik and his colleagues are working on identifying the fraction of X-ray binaries harboring black holes versus neutron stars. That research will help them understand the population as a whole and hopefully lead to some insights about X-ray binaries’ role in the universe as a whole.

Read more about this research from NASA/JPL. 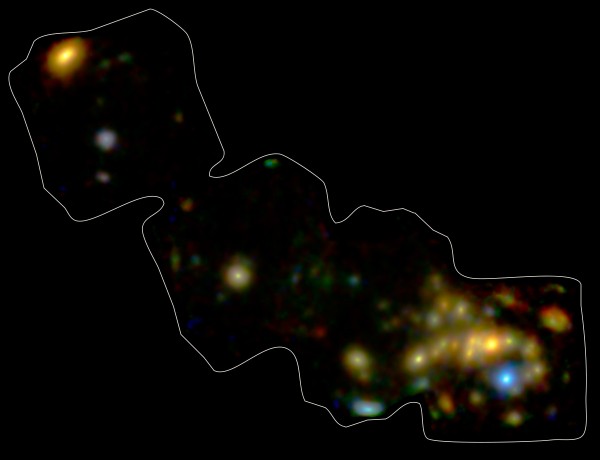 View larger. | A close-up of the inset above: what the NuSTAR space observatory saw. NuSTAR’s view shows high-energy X-rays coming mostly from X-ray binaries, which are pairs of stars in which one ‘dead’ member feeds off its companion. The dead member of the pair is either a black hole or neutron star. Astronomers say NuSTAR can pick up even the faintest of these objects, providing a better understanding of their population, as a whole, in the Andromeda galaxy. Image via NASA/JPL-Caltech/GSFC.

Bottom line: NASA’s NuStar space observatory has obtained an excellent view of a portion of the Andromeda galaxy, at the high-energy X-ray end of the electromagnetic spectrum. The X-ray view of this nearby galaxy is letting astronomers study X-ray binary stars, which are thought to play a role in the evolution of the universe as a whole.