Writer Andrew Kessler spent the summer of 2008 embedded with NASA’s Tucson, Arizona mission control – the team that oversaw the Phoenix Mars Lander. His book about the experience, Martian Summer, was published in spring, 2011. Kessler was the first “outsider” to be granted such high-level access to Tucson’s mission control.

Kessler explained that the Phoenix Mars Lander, which touched down on Mars in May of 2008, aspired to – and met – some great scientific goals, including the identification of water ice in Martian soil samples. The lander also observed falling snow on Mars. Kesser explained that what most people don’t appreciate – or even know – is how difficult the mission was to pull off. He told EarthSky: 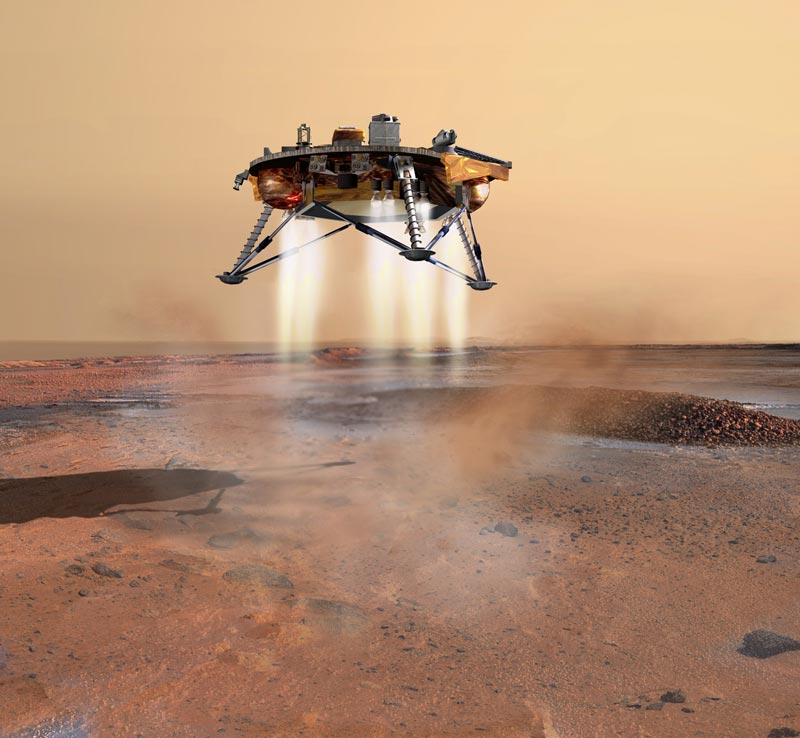 You’re sending this 800-pound hunk of metal 200 million miles away. It’s got really sensitive scientific gear, it’s hurtling through space at 65,000 miles per hour. It has to slow down, and gently touch down on the surface that you’ve already exposed to radiation, and then it has to make precise measurements. What does it take to make that? It takes these kind of quiet heroes.

The heroes – physicists, engineers – of mission control. He explained that they all had to sync up their body clocks with the solar-powered Mars Phoenix Lander, in order to properly analyze the craft’s data. In other words, when the Lander went to sleep as Mars’s sun set, mission control had to wake up. He said:

That gets really complicated, because we’re here on Earth, but on Mars, there’s a 24 hour and 40 minute day. So every day, you need to go to work 40 minutes later. And that creates actual problems for your body.

Kessler’s jet lag – or Mars-lag – eventually subsided, he said, but his time at mission control made a permanent impression.

I think that’s one great thing about these missions. They have a power to help us consider our place, our conflicts, our differences, and what a huge effort it takes to get off this planet.

And then there was the work itself: analyzing the data coming from the Lander.

The crazy thing about working on a Mars mission is that this Lander is solar powered and the Lander does its work while the sun is up and then it goes to sleep and sends its data home. Because you can’’t communicate in real time with the Lander. Mars is too far. Once the Lander goes to sleep, there’s this daily scramble to understand what it did before, and re-plan for the next day. That requires a big, big effort, and re-coding thousands of lines of machine code, a robot arm code, to make it all work.

Kessler’s personal favorite Mars Lander discovery was a chemical called perchlorate, a type of salt, which he said wasn’t given enough attention by the press. He said:

We’ve been trying to find the organic material on Mars, the stuff life might be made of. And all our experiments have returned nothing. But Phoenix came along and discovered this weird chemical on the surface of Mars called perchlorate. Basically, the way that they were looking for organic material is to heat up the samples. But it turns out that method wasn’t a good one, because the perchlorate was burning up any potential organic chemical signatures on those samples.

In other words, the Phoenix Mission gave NASA the opportunity to improve its methods for searching for life on other planets. Perchlorate could also potentially be food for microbes on Mars, Kessler added. He also talked about one of his favorite elements of the Mars Lander craft, itself – its robotic arm.

The main kind of core instrument on the Phoenix Mars mission was this eight foot long arm. The job of the mission was to dig stuff up on the north pole of Mars. So you have this eight foot long arm with a little backhoe. Its job was to acquire samples and to put them into this little instrument. The problem with being a robot arm engineer is that you don’t get a lot of love. Because, scooping up dirt, that sounds like something you might do on the beach.

But digging up dirt on Mars is quite a bit harder.

In fact, making this arm move down to the soil, to the Mars dirt, to touch it and to acquire this sample is really, really difficult. They can’t just stick their head out the window of the Lander and see where the arm is, right? Everything they do is filtered through this 200 million mile lens. And that really complicates the picture.

And what they liken it to is trying to blindly dig around with a dustpan at the end of a fishing pole. These guys do it with just this quiet dignity. Every time you see “Sample Not Acquired” in the newspaper, you’re like “Ugh, poor guys!” Because you know that they spent all night looking at this hundred column matrix of data figuring out how they were trying to get a couple of tablespoons of dirt into this instrument. And all you see in the press is “didn’t get it,” and you’re just like, “Wow…too bad.”

The Mars Lander mission was declared concluded in November of 2008, after repeated attempts to make contact with the spacecraft failed. Kessler pointed out that the spacecraft exceeded expectations, surviving – intact – for months longer than anticipated.

It was like this recycled hunk of junk. All these parts were about to expire, according to NASA regulations, and they were like, “You know what. We’re gonna fly ’em. And we’re going to get to Mars on the cheap.” The Phoenix lander did a great job. It was only supposed to last for about three months up there. It lasted about six. And it’s solar powered, right? So when the sun went down for winter in 2008, there wasn’t much hope.

Kessler said that his book Martian Summer was commissioned by Peter Smith, Principal Investigator of the Phoenix Mars mission.