Will a killer asteroid strike the Earth in the foreseeable future?

Andrea Milani is a mathematician at the University of Pisa in Italy, and he’s an expert on tracking killer asteroids. He heads one of only two groups in the world that calculate the odds of an asteroid hitting the Earth. Dr. Milani was in Austin, Texas in early 2011 to receive the Brouwer Award from the American Astronomical Society, and that’s when EarthSky’s Jorge Salazar caught up with him.

Will a killer asteroid impact the Earth in the foreseeable future?

The number of asteroids is not properly defined unless you speak of size. For example, the number of asteroids that can cross the orbit of the Earth – and are larger than one kilometer – is only about 1,000. So at this point, we have a good grasp on them: we know essentially 80 percent of them.

And we know these 80 percent are not going to hit us in the next 100 years or so. 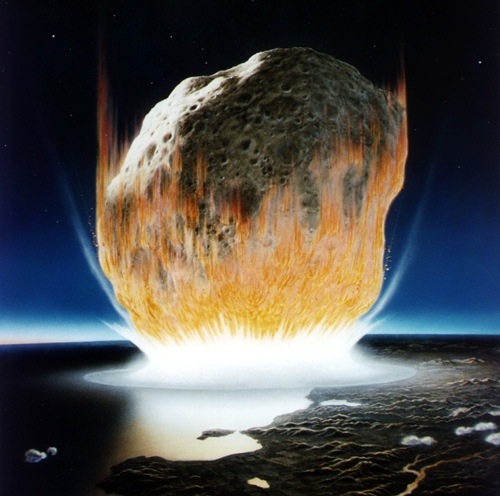 But – although the smallest asteroids might hit us – the amount of damage they could do is quite minor. Also, we are to some extent protected by the atmosphere. It’s estimated that if an asteroid is smaller than about 40 meters – unless it is metallic – it does not get to the ground. Therefore, it might make a big firework in the atmosphere, but it is not necessarily dangerous.

So we have still work to do to decrease the risk. But, in reality, most of the work has been done already in the last 20 years or so.

What about the possibility that there’s a surprise asteroid out there that scientists don’t know about?

Of the objects that we’ve already discovered, we can compute whether they hit the Earth or not. For the ones we have not discovered, we don’t know, which means they can still come upon us by surprise.

The goal is to reduce this uncertainty by observing, investing in telescopes and computers and the work of qualified people in such a way that we know more and more. That way, the ones that are completely unknown and can take us by surprise are less and less. 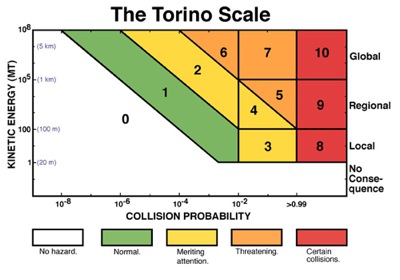 Asteroid Apophis set a record when it was the first object to hit a level 2 on the Torino scale in 2004. Image Credit: NASA

Is there something in the asteroid data that concerns you, or keeps you up at night?

At this moment, no. One particular object – which is called Apophis, discovered around Christmas 2004 – did that. We did not have much data. Our result was not as quantitative as we would have liked. And therefore, we were not in a position to exclude that it would impact the Earth in 2029.

And the probability of this event as computed by the data we had at that time was very large: one in 37. Like zero at the roulette. Everybody loses. And then, a few days after Christmas, new data arrived, which allowed us to exclude the possibility of an impact in 2029.

Now this same asteroid has still the possibility of impacting the Earth in 2036. But that is much less likely. Honestly, I don’t consider it threatening at this moment. However, this is the one asteroid that will give us the worst fright in our work in our field.

You were just presented with the Brouwer award from the American Astronomical Society for your work in celestial mechanics. What inspired you to follow this path in astronomy?

I didn’t start with asteroids. I am by trade a mathematician. So I started from the most abstract side of the question. Then I gradually moved to more and more applied celestial mechanics, which is having to do with actual data from both telescopes and also from satellites and interplanetary space probes. 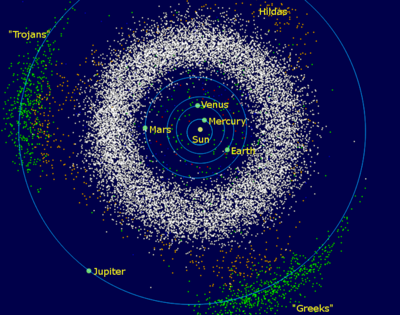 What interested me was that it is a discipline in which it’s possible to do work that’s extremely rigorous, according to the very demanding rules of mathematics. But, at the same time, it is about real things. It is rigorous – but also consistent with reality.

And this is an opportunity that is not often given, to make a science that is pure and at the same time realistic.

Where do you place astronomers’ understanding of the cosmos in relation to the immense waves of new data coming in from new missions and instruments? Are astronomers behind the curve of new data?

The problem is not that we cannot cope with the data. The problem is that you need the scientists to look at the data and see what they contain. So if you make a very large investment in something like a new, big telescope or a new satellite – and then you don’t pay the people to look at the data – you essentially are just wasting the effort. You should not believe that it is enough to build wonderful toys if you don’t also invest in human brains – trained and qualified people – who work with dedication to extract the real value from the brute data.

The thing I would like to make clear is that science really works. That is, you can actually predict the motion of a spacecraft, the motion of an asteroid, the motion of the Earth. A lot of things we can model with great detail. We can describe and predict with extreme precision. So science is a tool of understanding, and the methods of science are extremely effective as a guidance to cope with reality.

And I think this lesson is extremely important in these days, because I see too much irrationality floating around. Of course, science does not know everything. There are things that are known and not known. But at least we know what we know, and we know what we don’t know – which is quite important.

Listen to the 8-minute interview with Andrea Milani on what scientists know about killer asteroids, and about asteroid Apophis, at the top of this page.