Astronomers see this cloud just 1.8 billion years after the Big Bang. It has a tiny percentage of heavy elements, those forged in subsequent generations of stars. 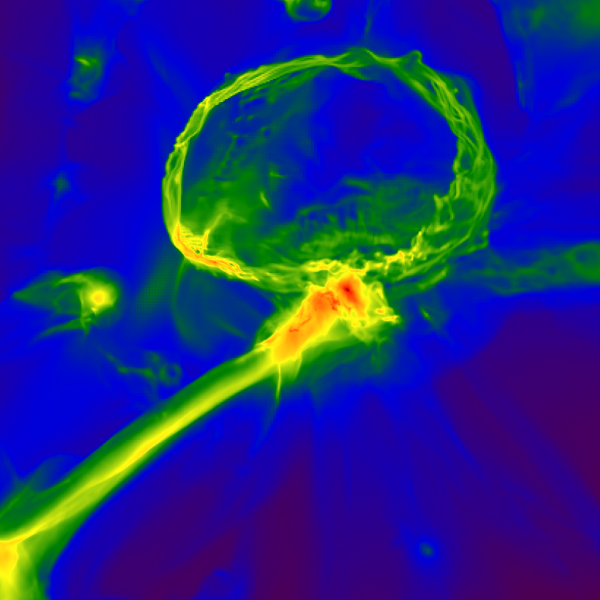 A computer simulation of the first stars in the universe shows how the gas cloud might have become enriched with heavy elements. In the image, one of the first stars explodes, producing an expanding shell of gas (top) that enriches a nearby cloud, embedded inside a larger gas filament (center). Image scale 3,000 light-years across. Color map represents gas density, with red indicating higher density. Image via Britton Smith, John Wise, Brian O’Shea, Michael Norman, and Sadegh Khochfar.

Australian and U.S. researchers teamed up to discover a distant, ancient cloud of gas that might contain the signature of our universe’s very first stars. The gas is observed as it was just 1.8 billion years after the Big Bang. It is relatively pristine, with only an extremely small percentage of the heavy elements we see today, which were forged within subsequent generations of stars. The cloud has less than one-thousandth the fraction of these elements – carbon, oxygen, iron and so on – observed in our sun. The astronomers published this research yesterday (January 13, 2016) in the Monthly Notices of the Royal Astronomical Society. The team used by the Very Large Telescope in Chile to make their observations.

Neil Crighton, from Swinburne University of Technology’s Center for Astrophysics and Supercomputing, led the research. He said in a statement:

Heavy elements weren’t manufactured during the Big Bang, they were made later by stars. The first stars were made from completely pristine gas, and astronomers think they formed quite differently from stars today.

The researchers say that soon after forming, these first stars – also known as Population III stars – exploded in powerful supernovae, spreading their heavy elements into surrounding pristine clouds of gas. Those clouds then carry a chemical record of the first stars and their deaths, and this record can be read like a fingerprint.

Previous gas clouds found by astronomers show a higher enrichment level of heavy elements, so they were probably polluted by more recent generations of stars, obscuring any signature from the first stars.

This is the first cloud to show the tiny heavy element fraction expected for a cloud enriched only by the first stars.

The researchers hope to find more of these systems, where they can measure the ratios of several different kinds of elements.

Professor John O’Meara from Saint Michael’s College in Vermont is a study co-author. He said:

We can measure the ratio of two elements in this cloud – carbon and silicon. But the value of that ratio doesn’t conclusively show that it was enriched by the first stars; later enrichment by older generations of stars is also possible.

By finding new clouds where we can detect more elements, we will be able to test for the unique pattern of abundances we expect for enrichment by the first stars.

The movie above shows the evolution of the main computer simulation describing the distant, ancient cloud of gas discovered by these researchers. The simiulation’s left panel, you see the gas density. The right panel shows the temperature. The first Pop III star – one of the first stars to form in our universe – forms at redshift 23.7 and shines for roughly 4 million years before exploding as a core-collapse supernova, at which time the right panel changes to show the metallicity (abundance of heavy elements released into the cloud, via the supernova).

About 60 million years after the first supernova (around 00:45 in the video), the simulation zooms in on the formation site of the second Pop III star. Shortly after it explodes, the supernova blast-wave collides with a nearby halo moving in the opposite direction (around 1:00 in the video). The passing blast-wave and a merger event induce turbulence, which allows the metals from the supernova to mix into the center of the halo.

The simulation continues to zoom in to follow the dense gas in the core of the halo as it undergoes runaway collapse. For much of the collapse, the central core can be seen becoming smaller and denser. Eventually, dust cooling becomes efficient, causing the gas to cool quickly and fragment into multiple clumps – future new stars.

As the simulation ends, we are looking at the pre-stellar cores – the hearts of future stars – that will go on to form the first low-mass stars.

Bottom line: The early universe formed with hydrogen and helium, but heavier elements – iron, carbon, silicon and so on – were forged inside stars and released into the interstellar medium via supernovas. Australian and U.S. researchers teamed up to discover a distant, ancient cloud of gas that might contain the signature of our universe’s very first stars, The gas is observed as it was just 1.8 billion years after the Big Bang. It is relatively pristine, with only an extremely small percentage of the heavy elements we see today.