An ancient magnetic field on Mercury

Near the end of its mission, the MESSENGER spacecraft revealed Mercury’s magnetic field to be at least 3.7 to 3.9 billion years old, or older. 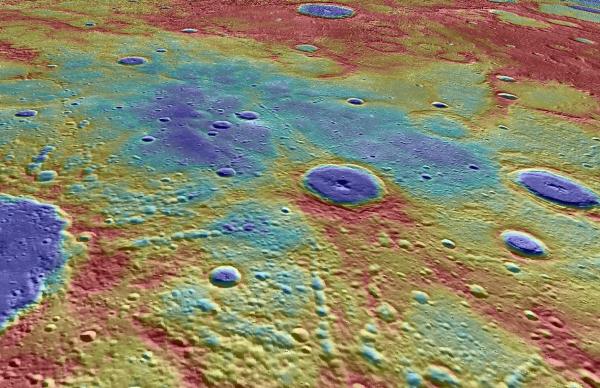 Looking west across Suisei Planitia (blue colors) on Mercury. This is the site of some of the crustal magnetic signals that led to an estimate of the age of Mercury’s magnetic field. Image via NASA/Johns Hopkins University Applied Physics Laboratory/Carnegie Institution of Washington

Scientists learned 40 years ago that Mercury has a magnetic field. But its they didn’t know its age and strength until the final months of the mission of the MESSENGER spacecraft, which orbited the planet from 2011 through 2015. Now – thanks to MESSENGER, which crash-landed on Mercury on April 30 – scientists are able to say that Mercury’s magnetic field has existed longer than previously speculated, clocking in at at least 3.7 to 3.9 billion years or older. MESSENGER’s low-altitude measurements of Mercury surface, as it came near the end of its mission, revealed the evidence of magnetization in rocks on the planet’s surface. Scientists published the recent Mercury magnetic field study in the journal Science on May 7, 2015.

As MESSENGER’s orbit was degrading, and it began orbiting Mercury closer than 60 miles (100 km) from Mercury’s surface, the spacecraft’s magnetometer, an instrument that measures magnetic field strength, was able to detect evidence of the ancient field through magnetized crustal rocks. Planetary scientist Catherine Johnson is lead author of the study. Johnston said:

Magnetized rocks record the history of the magnetic field of a planet, a key ingredient in understanding its evolution.

Decades ago, scientists believed Mercury did not have a magnetic field, due to its small size and proximity to the sun. Then, in 1974, the Mariner 10 probe detected a weak magnetic field, less than 1/100th the Earth’s. Data from the Mariner 10 mission revealed that Mercury actually had a large iron core, consisting of approximately 75 percent of its total mass. Now, according to the new study:

… We have detected remanent [residual] magnetization in Mercury’s crust. We infer a lower bound on the average age of magnetization of 3.7 to 3.9 billion years. Our findings indicate that a global magnetic field driven by dynamo processes in the fluid outer core operated early in Mercury’s history.

Now scientists say Mercury’s magnetic field may have been much stronger 4 billion years ago than it is today. 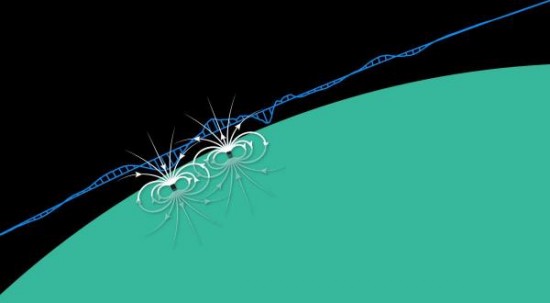 In this dynamo mechanism, fluid motion in the Earth’s outer core moves conducting material (liquid iron) across an already existing, weak magnetic field and generates an electric current. (Heat from radioactive decay in the core is thought to induce the convective motion.) The electric current, in turn, produces a magnetic field that also interacts with the fluid motion to create a secondary magnetic field. Together, the two fields are stronger than the original and lie essentially along the axis of the Earth’s rotation.

Mercury’s magnetic field is thought to operate in the much same way; however, the field is weaker than that of Earth.

In contrast, the other large inner worlds in our solar system – Venus, Mars and Earth’s moon – do not show any evidence for internal magnetism generated via the dynamo effect.

Scientists say Mercury’s ancient magnetic field gives them new insight into the planet’s history of volcanic and tectonic activity, as well as its magnetic stability and relationship with the rest of the solar system. Johnson said:

Being able to pin down how long Mercury has had a magnetic field helps us narrow down scenarios for the early history of Mercury and how it has changed over time.

This in turn helps us understand more about planetary evolution in general.

Bottom line: Until the 1970s, scientists believed Mercury did not have a magnetic field. Today, they know it does possess a magnetic field, thought to be generated by the dynamo effect, just as Earth’s magnetic field is. Recent data from the MESSENGER spacecraft, as it near the end of its mission in April 2015, suggests that Mercury’s magnetic field is at least 3.7 to 3.9 billion years old, or older.