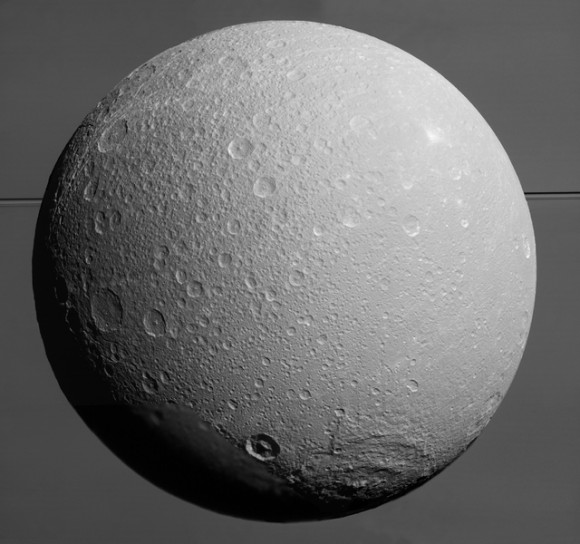 This view from NASA’s Cassini spacecraft looks toward Saturn’s icy moon Dione, with giant Saturn and its rings in the background, just prior to the mission’s final close approach to the moon on August 17, 2015. At lower right is the large, multi-ringed impact basin named Evander, which is about 220 miles (350 kilometers) wide. The canyons of Padua Chasma, features that form part of Dione’s bright, wispy terrain, reach into the darkness at left. Image credit: NASA

NASA’s Cassini spacecraft passed 295 miles (474 kilometers) above the surface of Saturn’s moon Dione on August 17, 2015 in the mission’s last close approach. This was the fifth close encounter with Dione during Cassini’s long tour at Saturn. The mission’s closest-ever flyby of Dione was in December 2011, at a distance of 60 miles (100 kilometers).

A pockmarked, icy landscape looms beneath the spacecraft in these new images of the small, icy world taken during the flyby. 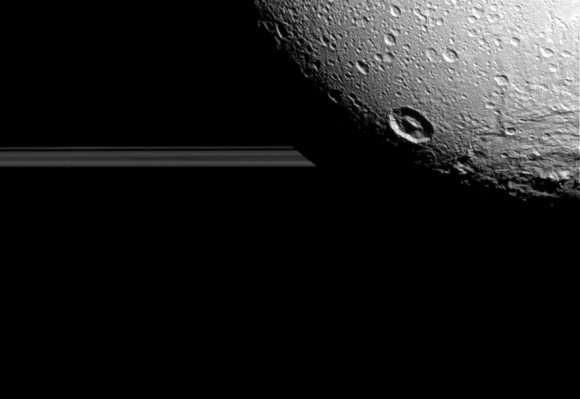 Saturn’s moon Dione hangs in front of Saturn’s rings in this view taken by NASA’s Cassini spacecraft during the inbound leg of its last close flyby of the icy moon. Image credit: NASA/JPL-Caltech/Space Science Institute 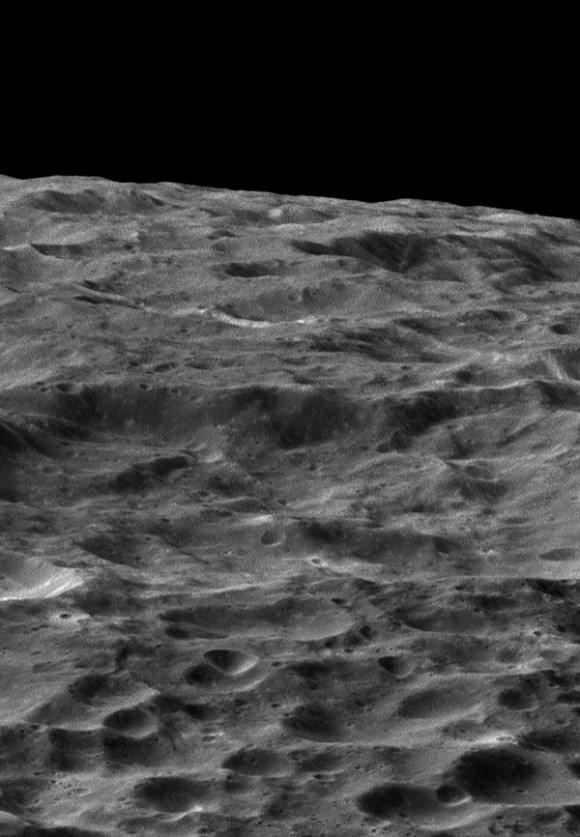 I am moved, as I know everyone else is, looking at these exquisite images of Dione’s surface and crescent, and knowing that they are the last we will see of this far-off world for a very long time to come. Right down to the last, Cassini has faithfully delivered another extraordinary set of riches. How lucky we have been. 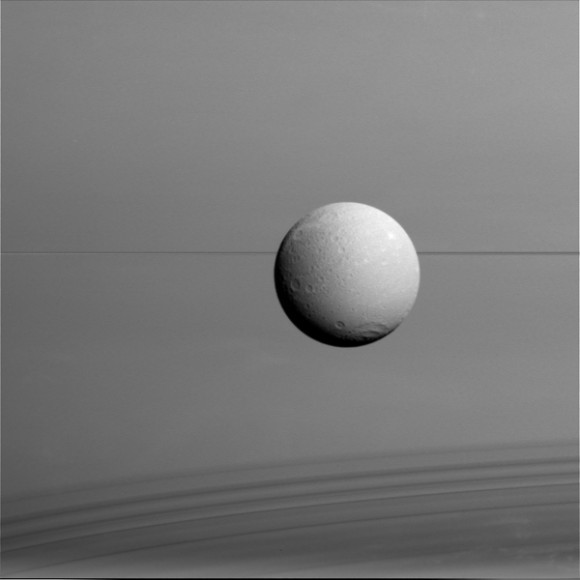 Dione hangs in front of Saturn and its icy rings in this view, captured during Cassini’s final close flyby of the icy moon. Image credit: NASA/JPL-Caltech/Space Science Institute

The main scientific focus of this flyby was gravity science, not imaging. This made capturing the images tricky, as Cassini’s camera was not controlling where the spacecraft pointed.

We had just enough time to snap a few images, giving us nice, high resolution looks at the surface. We were able to make use of reflected sunlight from Saturn as an additional light source, which revealed details in the shadows of some of the images.

Cassini scientists will study data from the gravity science experiment and magnetosphere and plasma science instruments over the next few months as they look for clues about Dione’s interior structure and processes affecting its surface. 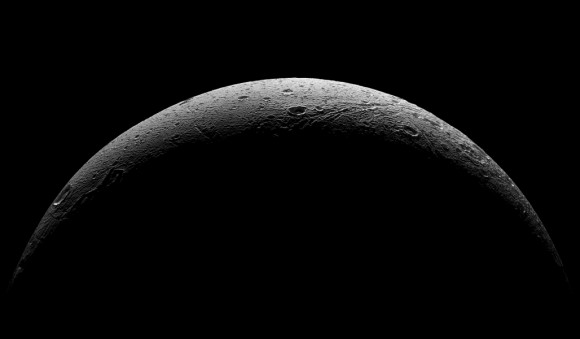 Only a handful of close flybys of Saturn’s large, icy moons remain for Cassini. The spacecraft is scheduled to make three approaches to the geologically active moon Enceladus on October 14 and 28, and December 19. During the October 28 flyby, the spacecraft will come dizzyingly close to Enceladus, passing a mere 30 miles (49 kilometers) from the surface. Cassini will make its deepest-ever dive through the moon’s plume of icy spray at this time, collecting valuable data about what’s going on beneath the surface. The December Enceladus encounter will be Cassini’s final close pass by that moon, at an altitude of 3,106 miles (4,999 kilometers).

After December, and through the mission’s conclusion in late 2017, there are a handful of distant flybys planned for Saturn’s large, icy moons at ranges of less than about 30,000 miles (50,000 kilometers). Cassini will, however, make nearly two dozen passes by a menagerie of Saturn’s small, irregularly shaped moons – including Daphnis, Telesto, Epimetheus and Aegaeon – at similar distances during this time. These passes will provide some of Cassini’s best-ever views of the little moons.

During the mission’s final year, Cassini will repeatedly dive through the space between Saturn and its rings.