Supernovae – exploding stars – are unpredictable. But an amateur astronomer in Argentina happened to catch one just as it began to explode. “It’s like winning the cosmic lottery,” one astronomer said. 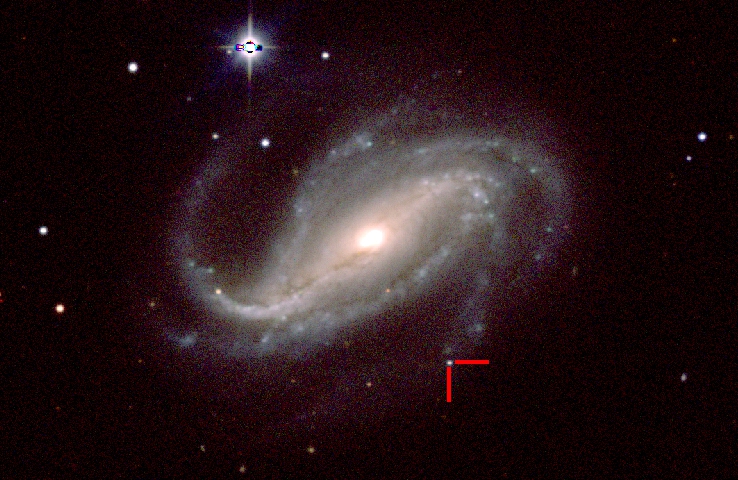 Some amateur astronomers avidly and routinely search for supernovae – or exploding stars – in distant galaxies. But Víctor Buso, an amateur astronomer in Rosario, Argentina, wasn’t doing that when he caught the initial burst of light from the supernova now labeled SN 2016gkg. Instead, he was performing tests on a new camera. As it turned out, his series of photos provided professional astronomers with one of the first views ever of the initial burst of light from a supernova – in this case, in the distant galaxy NGC 613 – before and after the critical period known as a supernova’s shock breakout. University of California Berkeley astronomers explained:

That’s when a supersonic pressure wave from the exploding core of the star hits and heats gas at the star’s surface to a very high temperature, causing it to emit light and rapidly brighten.

Professional astronomers afterwards analyzed Buso’s photos, and they continued observing SN 2016gkg with big telescopes. They said this combination provided them with important clues to the physical structure of the star just before it exploded, and that these clues will help them understand the nature of the explosion itself. UC Berkeley astronomer Alex Filippenko, who followed up the discovery with observations at the Lick and Keck Observatories, said:

Observations of stars in the first moments they begin exploding provide information that cannot be directly obtained in any other way.

Buso’s data are exceptional. This is an outstanding example of a partnership between amateur and professional astronomers.

The discovery and results of follow-up observations from around the world will be published in the February 22, 2018, issue of the peer-reviewed journal Nature. 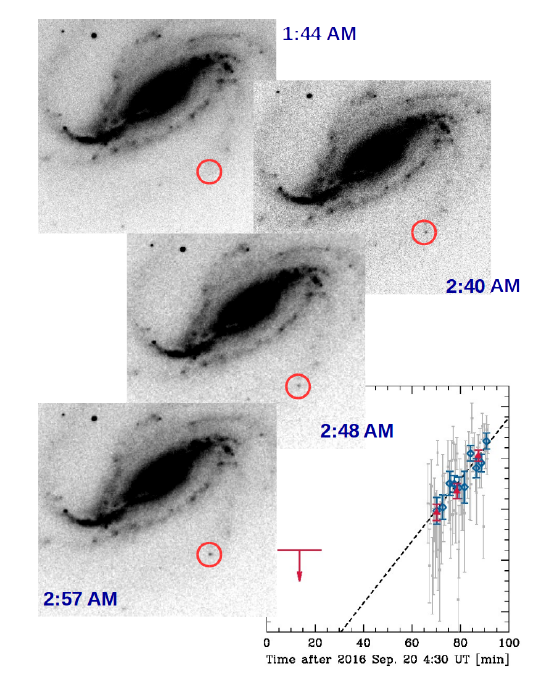 Sequence of combined images (negatives, so black corresponds to bright) obtained by Víctor Buso as SN 2016gkg appears and brightens in the outskirts of the spiral galaxy NGC 613. Labels indicate the time each image was taken. The object steadily brightened for about 25 minutes, as shown quantitatively in the lower-right panel.

Buso caught his series of photos on September 20, 2016, as he was testing a new camera on his 16-inch telescope. He happened to be aimed toward the spiral galaxy NGC 613, which is about 80 million light-years from Earth and located within the southern constellation Sculptor, while taking a series of short-exposure test photographs. The UC Berkeley statement explained:

Luckily, he examined these images immediately and noticed a faint point of light quickly brightening near the end of a spiral arm that was not visible in his first set of images.

Astronomer Melina Bersten and her colleagues at the Instituto de Astrofísica de La Plata in Argentina soon learned of the serendipitous discovery and realized that Buso had caught a rare event, part of the first hour after light emerges from a massive exploding star. She estimated Buso’s chances of such a discovery, his first supernova, at one in 10 million or perhaps even as low as one in 100 million.

Bersten immediately contacted an international group of astronomers to help conduct additional frequent observations of SN 2016gkg over the next two months. Filippenko and his colleagues obtained a series of seven spectra, where the light is broken up into its component colors, as in a rainbow, with the Shane 3-meter telescope at the University of California’s Lick Observatory near San Jose, California, and with the twin 10-meter telescopes of the W. M. Keck Observatory on Maunakea, Hawaii.

His team later estimated that the initial mass of the star was about 20 times the mass of our sun, though it lost most of its mass, probably to a companion star, and slimmed down to about five solar masses prior to exploding.

Bottom line: Supernovae – exploding stars – are unpredictable. But an amateur astronomer in Argentina happened to catch one just as it began to explode. “It’s like winning the cosmic lottery,” one astronomer said.