After a long search at the solar systems’ fringes, scientists say they have three possible targets for the New Horizons spacecraft after its July 2015 Pluto flyby. 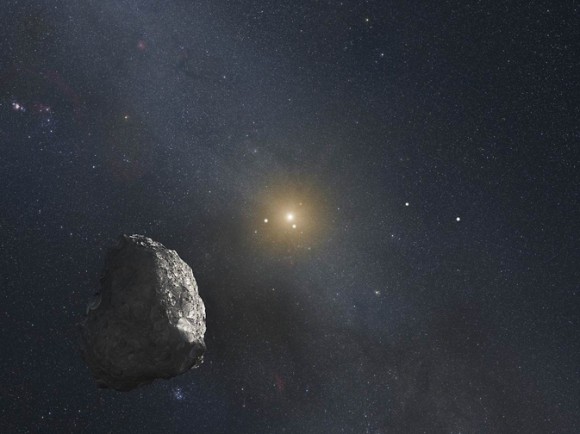 Artist’s impression of a Kuiper Belt object (KBO), located on the outer rim of our solar system at a staggering distance of 4 billion miles from the sun. Image via NASA, ESA, and G. Bacon (STScI)

After a several-year search using both ground-based and space telescopes, scientists have now been able to identify three possible new targets for the New Horizons spacecraft after it flies by Pluto in July 2015. A team of Pluto researchers were awarded time on the Hubble Space Telescope earlier this year in order to search for suitable new targets. The team said on October 15, 2014 that they have found three potentially suitable Kuiper Belt objects (KBOs).

What’s so exciting about this? For one thing, we’ve never come close to visiting a Kuiper Belt object before, nor are we likely to anytime soon without New Horizons’ help. The New Horizons mission has been en route to Pluto since 2006. No future Pluto mission, or Kuiper Belt missions, are scheduled at this time. But, because it is a flyby and not an orbital mission, New Horizons has the potential to go further out in our solar system than Pluto, which was once considered our solar system’s outermost planet, and which today is categorized as one of several dwarf planets.

Most Kuiper Belt objects are even more distant than Pluto. NASA described the Kuiper Belt as:

The KBOs Hubble found are each about 10 times larger than typical comets, but only about 1-2 percent of the size of Pluto. Unlike asteroids, KBOs have not been heated by the sun and are thought to represent a pristine, well preserved deep-freeze sample of what the outer solar system was like following its birth 4.6 billion years ago. The KBOs found in the Hubble data are thought to be the building blocks of dwarf planets such as Pluto.

The New Horizons team started to look for suitable KBOs in 2011 using some of the largest ground-based telescopes on Earth. They found several dozen KBOs, but none was reachable within the fuel supply available aboard the New Horizons spacecraft. New Horizons science team member John Spencer said:

We started to get worried that we could not find anything suitable, even with Hubble, but in the end the space telescope came to the rescue. There was a huge sigh of relief when we found suitable KBOs; we are ‘over the moon’ about this detection.

The three KBOs identified each are a whopping 1 billion miles beyond Pluto. Two of the KBOs are estimated to be as large as 34 miles (55 kilometers) across, and the third is perhaps as small as 15 miles (25 kilometers).

The New Horizons spacecraft, launched in 2006 from Florida, is the first mission in NASA’s New Frontiers Program. Once a NASA mission completes its prime mission, the agency conducts an extensive science and technical review to determine whether extended operations are warranted.

The New Horizons team expects to submit such a proposal to NASA in late 2016 for an extended mission to fly by one of the newly identified KBOs. Hurtling across the solar system, the New Horizons spacecraft would reach the distance of 4 billion miles from the sun at its farthest point roughly three to four years after its July 2015 Pluto encounter.

Accomplishing such a KBO flyby would substantially increase the science return from the New Horizons mission as laid out by the 2003 Planetary Science Decadal Survey, the team said.

Bottom line: It was a long and laborious search for tiny objects on the outer fringes of the solar system. But now scientists on the New Horizons spacecraft mission say they have three possible targets for the craft after its July 2015 Pluto flyby.